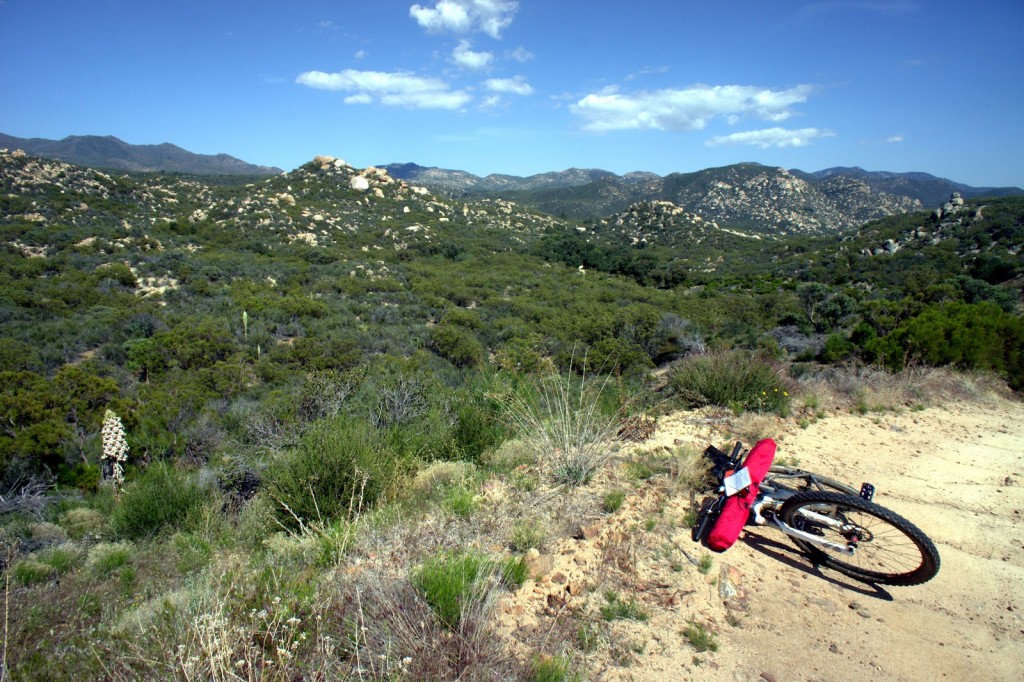 2012 was an exciting year for ultra-endurance bikepacking, as records fell across the spectrum. The established North American events also drew a larger number of riders, and a new event in Southern California attracted more than fifty participants by itself. Here’s a run-down of the major races of the year: 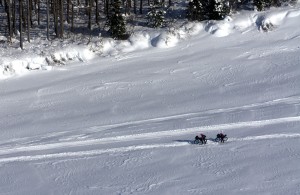 Cyclists push their bikes up the Yentna River during the Iditarod Trail Invitational.

The ultra bikepacking season had a rough start with the Iditarod Trail Invitational, a 350-mile and 1,000-mile winter race that started the afternoon of February 23 in Knik, Alaska. Calm skies and moderate temperatures gave way to a full-blown blizzard within minutes after forty-six skiers, runners, and cyclists launched onto the famed dog sled race route. Snow buried the trail and the cyclists were forced to push their bikes through the deepening powder before they had even covered ten miles. By nightfall, more than three feet of new snow covered the trail and all racers who hand’t already quit were bunched up in an expedition line, slowly breaking trail. The group took more than twenty-four hours to reach mile fifty-seven, and another day to trudge to the mile ninety checkpoint. Trail conditions continued to deteriorate, and runners led the race for most of four days. It wasn’t until well past mile 200, on a slightly more firm trail, that Alaskan cyclists Pete Basinger and Phil Hofstetter, and Czech cyclist Pavel Richtr, took the lead. Temperatures on the western side of the Alaska Range dropped below minus forty before Basinger won the 350-mile race in six days and 15 hours, his fifth win on the course with a time that was more than double his own course record. Hofstetter and Richtr came in three hours later, with the first runner, Geoff Roes, only five hours behind them. The only female cyclist to finish was singlespeeder Ausilia Vistarini of Italy, who finished in eight days, 23 hours. No one continued onto the 1,000-mile race to Nome. 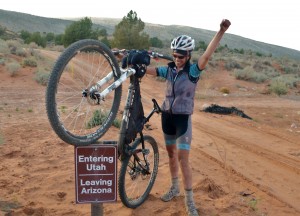 Jill Hueckman reaches the Utah border in the AZT750.

April brought more snowy challenges in the unlikely setting of the Arizona Trail Race, a 300-mile and 750-mile event across the desert on the Arizona Trail. About forty riders started the event at the Mexican border, only to be hit by a spring snowstorm on Oracle Ridge. “It was raining hard,” leader Kurt Refsnider told a reporter. “The higher I climbed, the whiter it got. Now there’s four or five inches out there. I was covered in ice by the time I got (to a store.)” Despite the frigid storm, challenging trail conditions, and even a few bike mechanicals, Refsnider continued a near-sleepless assault for 300 miles and finished in two days, seven hours, and 53 minutes. His winning time stood as the course record until a few weeks later, when Scott Morris lowered it to two days, five hours, and ten minutes during an individual time trial. Jill Hueckman was the first female finisher of the 300-mile race in four days, six hours, and seven minutes. Hueckman continued on the 750-mile route, becoming to first woman to race across the state on the Arizona Trail. She reached the Utah border in fourteen days, eleven hours, and 36 minutes. Kurt Sandiforth won the 750-mile race in nine days, eight hours, and six minutes. 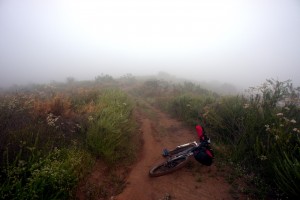 Foggy conditions during the Stagecoach 400.

In late April, a new race dubbed the Stagecoach 400 launched in Idyllwild, California. Brendan Collier, an Idyllwild bike shop owner and frame builder, along with his wife, endurance cyclist Mary Collier, created the route to showcase the best mountain biking in Southern California. Despite its relatively unknown and untested status, the Stagecoach 400 drew more than fifty participants to take on the challenge of desert heat, sand, the Laguna Mountains, urban San Diego, and palm-tree shaded singletrack. Jay Petervary blitzed the route without sleeping in fifty hours, and first-place woman Eszter Horanyi arrived just six hours behind him. 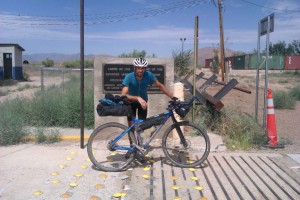 June brought the ultra-distance event of distance bikepacking, the Tour Divide. A record ninety-five cyclists lined up at the start of the 2,700-mile monster that follows the Continental Divide between Canada and Mexico. In the early days of the Tour Divide, southbound riders experienced wet and cold weather in Canada while a handful of northbound riders were rerouted by wildfire closures in New Mexico. As the southbound field spread out, Ollie Whalley of New Zealand and Craig Stappler of Canada opened a defining lead just south of the Canadian border. The two cyclists often rode side-by-side all the way to within a few hundred miles of the Mexican border, where Stappler broke a pedal outside Grants, New Mexico. Unable to find an adequate fix before it was too late, Whalley rode away to a win and new course record in sixteen days, two hours, and 54 minutes. Among the eleven women who started the event, Eszter Horanyi stayed in front of the pack for an often lonely nineteen days, three hours, and 35 minutes, shaving more than five days off the previous women’s record. Cjell Money was the first northbound rider to arrive in Banff, at 4:20 p.m. June 26. Two months later, Jay Petervary embarked on an individual time trial, and with surgical precision shaved ten hours off of Whalley’s young record, dropping the fastest time to fifteen days, sixteen hours, and four minutes.

About sixty racers lined up for the group start of the Colorado Trail Race, 470 miles of often technical trail winding through the Rocky Mountains. Ethan Passant and Jefe Branham pushed the pace early in the race with a blistering pace and plenty of moonlight pedaling. Cat Morrison led the women and also was on record pace. Even with an apparently more luxurious rest schedule, Jesse Jakomait continued to gain ground on the two leaders as the often stormy mountain miles piled up. It was an often near-neck-and-neck battle to Durango, where Branham ultimately sliced the course record below four days in three days, 23 hours, and 38 minutes. Morrison finished just off the women’s course record in five days, ten hours, and twenty minutes.