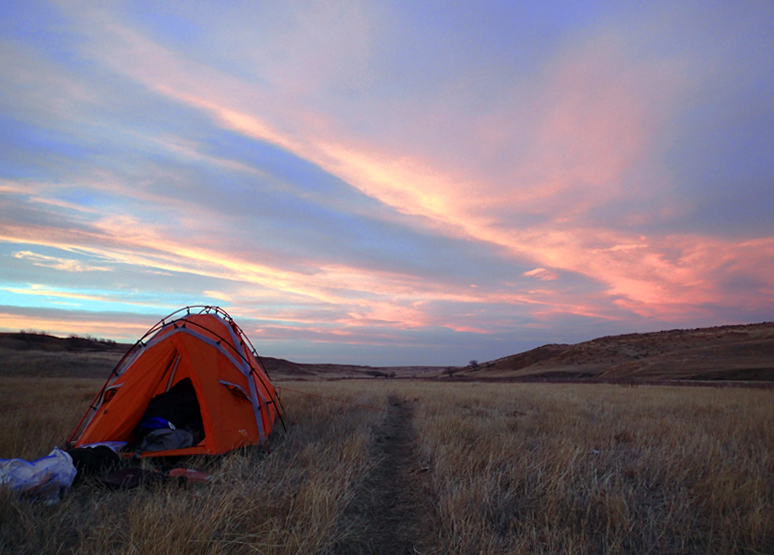 Ken Ilgunas’ tent is pitched in a field somewhere in central Montana.

On a snow-frosted corn field in Nebraska, where the edgeless prairie fades into an expansive gray sky, the only sounds are moans from the winter wind, and the crackle of boots on brittle ice. There’s a bearded hiker with a modern backpack, trekking poles, and a trail-worn expression, marching through a corridor of frozen corn stalks. It’s December, in the middle of Nowhere, America, and his infrequent encounters with passing farmers are met with suspicion, sometimes fear, and sometimes anger. Who is this crazy man? Why is he walking overland, in the winter, through a region where there isn’t a mountain, forest, or long-distance hiking trail for hundreds of miles? Who does that?

Ken Ilgunas isn’t a outdoor adventurer in the traditional sense. He’s a journalist and an environmentalist who is hiking 1,700 miles along the proposed route of the Keystone XL oil pipeline, which would transport crude oil from the tar sands region in northeastern Alberta to the Gulf Coast of Texas. It’s a controversial project that is close to becoming a reality, and Ilgunas sought a kind of high-visibility action that would help raise awareness about the effects of North America’s unquenchable thirst for oil. But, he admits, wanted also simply wanted to embark on a long journey, and experience a quieter slice of the American outdoors “while it’s still there.” 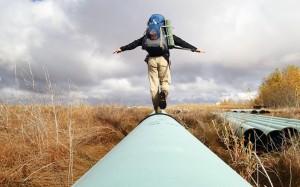 Ken Ilgunas walks across a section of pipe in Alberta.

Ilgunas began his hike in Hardisty, Alberta, in late September. He said the late-year start was a result of summer obligations, deadlines for another book project, and last-minute preparations. The creep of colder weather didn’t bother him because he planned to hike fast and move south ahead of winter. Physical maladies set in early in the walk, with the lingering effects of a broken toe, blisters, and shin splints slowing his progress. By the time he reached Montana in late October, he had switched his lighter camping gear for winter clothing and a heavy sleeping bag, and was regularly hiking through ice storms and blizzards.

He generally stuck close to the direct line of the proposed pipeline, hopping fences and trespassing over private farmland rather than take a more roundabout route on roads. On the few occasions he was caught trespassing, many residents invited him to their homes for dinner and a hot shower, defying the frequent warnings he received that landowners would shoot him on sight. He was continuously delighted by the kindness of people in the rural Midwest, but said he still often felt an underlying vein of resentment.

“I was in Buffalo, South Dakota, sitting at a kitchen table of a family who offered to give me a place to stay for the night,” he wrote in his blog. “‘For someone with a college education, what you’re doing is pretty stupid,’ said the woman of the house. ‘I mean, it’s really stupid.’ She was, and had been, laying on the criticism pretty thickly, but I was stupidly content, as I was eating the eighth pancake she’d made me, slathered in butter, and dripping with blueberry syrup. We’d had this discussion, it seemed, a half-dozen times, and I’d long ago given up trying to justify my trip, neglecting to parry her attacks with fresh retorts.”

Ilgunas said the frequent admonishing about his “insanity” does have an impact, and he sometimes finds himself paused in a snow-dusted cornfield with pain throbbing in his shins and feet, wondering what in the world he’s trying to accomplish. He’s walking across the plains, all alone, feeling his body become more weary by the day, just to shoot photos of big-sky sunsets and interview people who by a large majority supported the pipeline project and disapprove of his “stupid” journey. During his wanderings, he was pinned down by blizzards, surrounded by a posse of paranoid Montanans, chased by a herd of angry cattle, and arrested by a suspicious police officer who escorted him out of town.

“Such thoughts are like burrs stuck to my pant leg, prickling me once every few strides,” he wrote. “It’s not until I get out onto the open prairie, or into canyon country, or under a ceiling of stars that I’m finally able to shake them off. There is a wild joy that swells in my chest. Every day there is a new trial. There’s something new to learn; something new to see with every step, every turn, every drop into a canyon labyrinth. It’s an infusion of newness. And when immersed in this constant newness — when every step is exploratory, every interaction, novel, and every day completely different from the previous — it’s hard to think of going back again to the dullness of the normal, the expected, the planned.”

Ilgunas is currently in central Nebraska, still making his way south. Read updates from his unique journey at http://www.kenilgunas.com.

2 thoughts on “Pipe Dreams: A journey across the Plains”