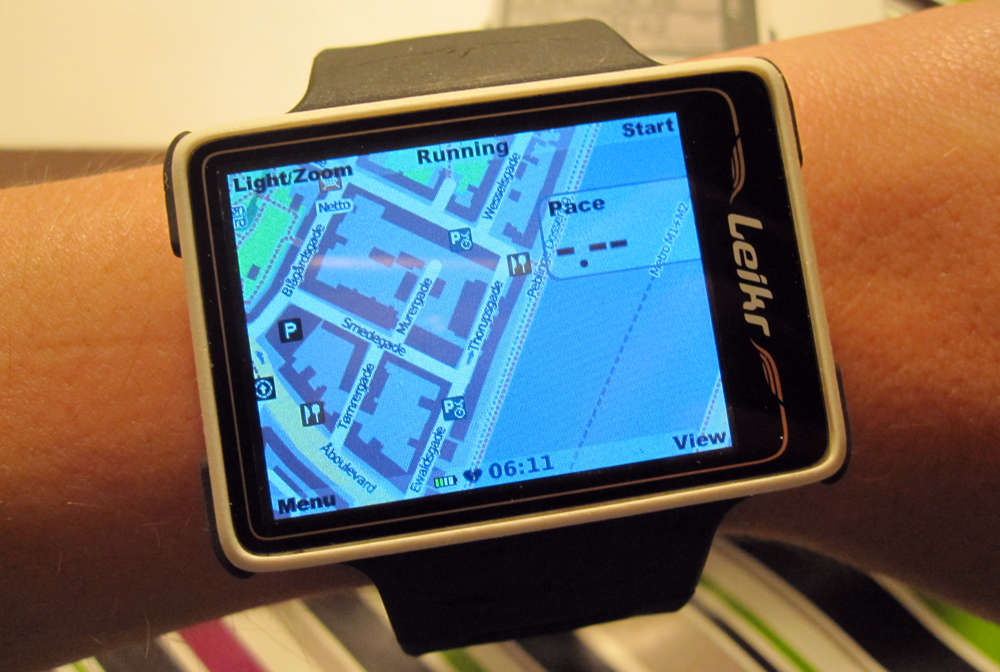 A map-screen view on the Leikr GPS sports watch.

Navigation is a fundamental component of any adventure, but for most of us, it’s not as simple as reading the stars or sniffing the wind. Personally, I possess a near-complete lack of any natural sense of direction, insomuch that I will reliably choose the wrong way whenever I approach an unfamiliar junction. (You’d think I could just do the opposite of what instinct tells me, but I tend to second guess my second guessing, and then I second guess that, and either way I end up going the wrong direction.) As a directionally challenged individual, I am grateful for any technology that helps me find my way.

I frequently use GPS navigation devices, but until recently, I’ve been disappointed by the features in GPS-enabled watches. In a market dominated by Garmin, Suunto, and Polar, most GPS watches focus on fitness information, with more training functions than all but the most meticulous record-keeping athletes will ever use. Even with all of these tracking features, few, if any, include the same user-friendly navigational functions that even the most basic handheld and vehicle GPS units offer. Once, while visiting Germany, I went for a run while holding a large-screen vehicle unit in my hand. I mapped out a route and relied on a soothing computer voice to tell me whenever I needed to turn left or right. It was the only way I felt comfortable setting out for a longer run on unfamiliar roads. I got a great, stress-free tour of scenic Bielefeld, but by the end of my run, both hands were badly cramped from gripping the unwieldy device.

So I am among the potential consumers excited about a new sports watch proposed by Leikr, a Danish company formed by former Nokia engineers and athletes who also were disappointed with the current market’s offerings. Leikr’s GPS sports watch features a high-resolution screen that not only displays fitness data, but also features inbuilt color maps with real-time navigation and tracking information. The two-inch screen can show heart rate, pace, speed, distance, elapsed time, and calories on one easy-to-read display. The device also tracks routes on maps that show users where they are, where they have been, and where they are going, “so you can adjust your training on the fly and always make it home,” according to Leikr’s engineers.

In addition to OpenStreet maps, the watch also has Wi-Fi and bluetooth connectivity for data-transfer on the go. Online features include device configuration, downloadable workouts, maps, programs, routes, and analytics. The device is water-resistant and can support remote sensors such as heart-rate monitors and power sensors. Its reported six-hour battery life is enough for most workouts, although daylong adventures would still require the longer life of larger handheld units.

“We took the best practices of designing cell phones and we brought these to the GPS watch market,” the engineers stated. “We were looking for the best way of having a completely integrated product, maximizing the screen real estate, reducing product size and thickness, increasing battery life and making the software customized through our back end.”

The 55-gram unit is currently in prototype, and the company is hosting a Kickstarter campaign to raise the funds to begin production. In return for pre-production funding, backers can receive early bird deals on the watches. As of this post, Leikr had raised more than $113,000 of its $250,000 goal, with 24 days left in the campaign. If the funding drive is successful, Leikr hopes to launch production in April or May and deliver the first watches to customers in June.

More information is available at the company’s Web site at http://leikr.com.

One thought on “Cool gadgets: A GPS watch that shows you where you are”