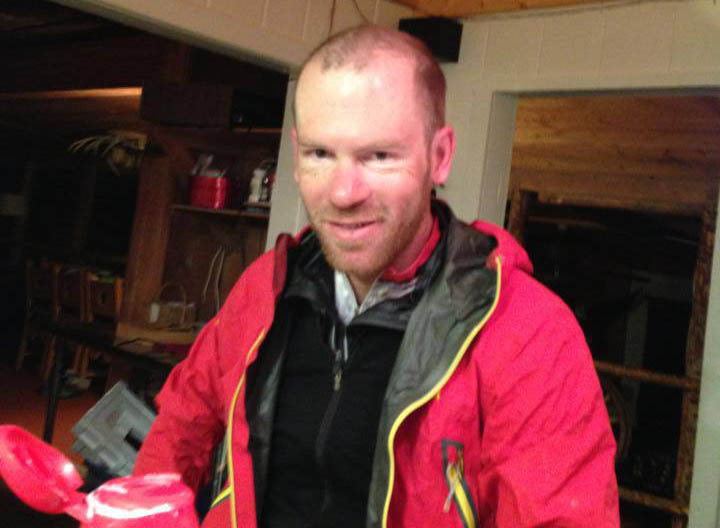 Craig Stappler takes a break at the Brush Mountain Lodge in Colorado on Friday. Stappler pulled out of the 2013 Tour Divide on Sunday.

Early Sunday morning, Tour Divide yo-yo rider Billy Rice posted the update, “Rough day out on the Divide for the blues.” Day ten was a rough one for several Tour Divide riders, with mechanicals and multiple scratches — including Craig Stappler, who was leading the race until he spent a bad night on Union Pass in Wyoming several days back. On Saturday night, Stappler stopped a few miles off route in Kremmling, Colorado, and called in the morning with his official drop.

“I took Matt Lee’s advice and decided not to scratch until morning, but I’m pulling out of this year’s race,” he said. “It has nothing to do with the position I’m in. I came to win, but first place is only a number. I think it was Mike Hall’s year regardless of who showed up or what anyone else did. I’d like to congratulate him on an amazing ride, and also Jesse Carlsson on an amazing ride … yeah, my heart’s just not in it. I feel fine, I’m healthy, I feel good. I think I only had 34 days of ultra-racing in me and I used them up, and that’s where I’m going to stop.”

Stappler’s scratch came as a surprise to many fans, who were pulling for him to make a comeback in what had been a tight race against British cyclist Mike Hall. Hall is now firmly in the lead more than 150 miles ahead of Australian Jesse Carlsson, but he’s not without his own Divide woes. He reported that we was starting to see smoke from the massive West Fork fire complex near Del Norte. Although the air was still relatively clear where he was riding, he’d heard reports from locals that the smoke was almost unmanageable closer to the wildfires. “They say you can hardly breathe down there,” he said. He planned to continue pedaling south and pull off route for a rest of things got too bad.

Now in second position, Carlsson reportedly arrived in the small town of Como, Colorado, in a state of shock. David Tompkins, the operator of a bed and breakfast in town, reported that Carlsson arrived shortly after ITT rider Kerrin Walker. “We had a major electrical storm, thunder, lightening, a little bit of moisture, Kerrin just missed it,” Tompkins wrote. “What we think happened is that halfway down Boreas (Pass), Jesse had a flat, he was running tubeless and put a tube in. Coming into Como, it is pretty open; he was found on the town limits dazed and confused, cycling with a totally flat tire saying he was looking for a guy called Como. We sat him down, got some water and coke into him. We thought he had major concussion. He had obviously come down on his right side, knee and wrist hurt but no cuts or major abrasions. Now he is now lucid, but it took him sometime to come around, he was insisting he was third in the race, all he rembers was the thunder and lightening. We think he was near a lightening hit and was blown off his bike.”

Beyond this report, it’s unclear what condition Carlsson is in or whether or not he will continue in the race. Now in third position, Alex Harris of South Africa is about 350 miles behind Hall.

At least two other riders decided to call Sunday their last day on the Divide this year. Max Morris, one of the riders attempting a Triple Crown completion of three major bikepacking races, posted a Facebook update: “TD … DNF. Sorry to all my friends, family and sponsors. Now the adventure of getting home. Again SORRY.” Morris had mechanical issues that forced him to detour into West Yellowstone earlier in the week, but he did not give a specific reason for dropping from the race.

Andrew Carney, who stopped near Flagg Ranch, Wyoming, posted, “Well, that ended quickly. Went from riding to walking to throwing up everything my body had to offer to laying on the side of the road in my sleeping bag shivering in the sun all within 3 hours. Thankfully I found a ride out and into Jackson. It took another 6 hours before I could even keep water down but the fever has broke and grape pedialyte is the bees knees. I’m out.” There have been reports that an outbreak of norovirus has hit the region near West Yellowstone. It’s possible Carney contracted this illness.

Forrest Baker reported that usually favorable winds across the Great Divide Basin turned on him and other southbound riders on Sunday. “The Basin, it was closed to Southbound people today,” he said. “The wind was in the wrong direction for us. No tailwinds for us.”

And the third Triple Crown racer, Eric Foster was holed up at Togwotee Lodge after his seat clamp broke and the hose clamp he was using to keep it in place wouldn’t hold for more than thirty minutes at a time. He was waiting for a new clamp to be delivered from Jackson.

As of Sunday night, Trackleaders still listed 119 cyclists actively riding the Divide, although several of those are known drops who haven’t registered yet. Still, even after ten days of hardships, more than a hundred cyclists continue making their way across the country on the Great Divide Mountain Bike Route.