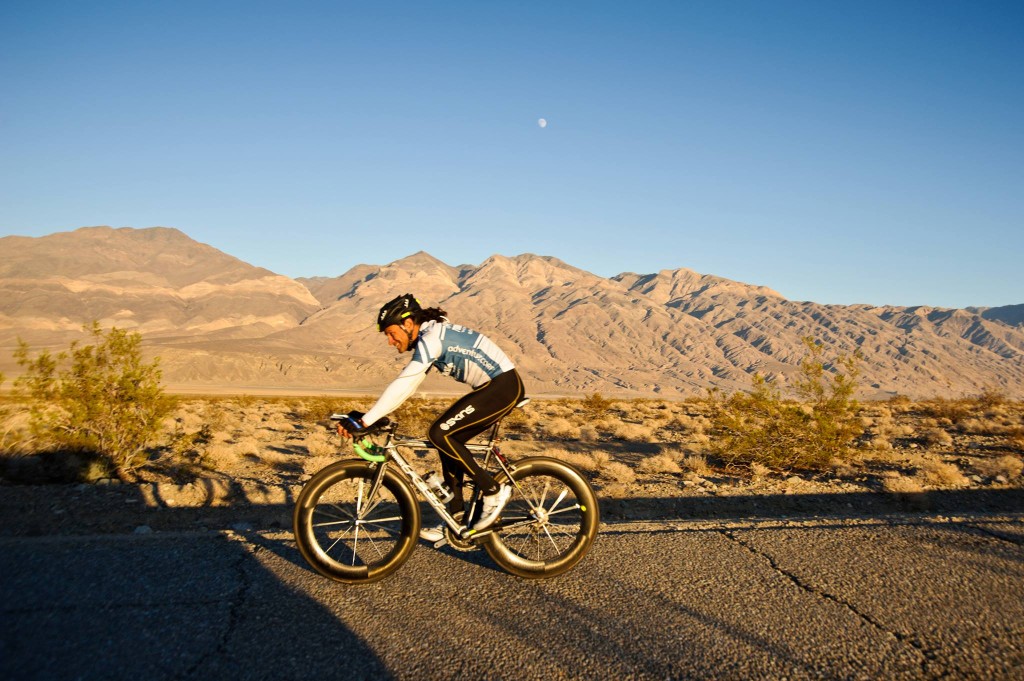 A cyclist rides through the Panamint Valley during the Furnace Creek 508 in 2011.

In the grand scheme of programs and people affected by the U.S. government shutdown, the impact on endurance athletes is a tiny concern. Still, this shutdown does reach many people in most walks of life, and there are several athletic events that have been cancelled, suspended, or shortened because of the government shutdown, including at least two ultra-endurance races — the Furnace Creek 508, a bicycle race in California, and the Grindstone 100, a run in Virginia.

The Furnace Creek 508, a 508-mile event produced by AdventureCORPS Inc., is popular among ultracyclists for its mountain climbs, stark desert scenery, desolate roads, and challenging distance. It also passes through Death Valley National Park and the Mojave National Preserve, both closed as long as the government’s doors are shuttered. Organizers scrambled to cobble together a “plan B” route from Santa Clarita to Trona and back, for a 353-mile ride through the Southern California desert.

“It will still count,” the organizers wrote on their Facebook page. “There will be results, winners, and DNFs. It will “count” towards earning Hall of Fame membership, which requires five official finishes of the race. Most of all, it will be a memorable experience … It will be the 30th anniversary of an extraordinary race with an incredible legacy, a legacy which will be built upon this year, and will springboard us in the future.”

The Grindstone 100, a new 100-mile foot race in the Blue Ridge mountains of Virginia, uses a route that passes through George Washington National Forest. Even though national forest lands remain open during the shutdown, race organizers were informed that U.S. Forest Service personnel would not be available to oversee their permit during the shutdown, and they would have to reschedule the race if the shutdown didn’t end before the event’s scheduled starting date on Oct. 4. Organizers briefly suspended the race before bumping the date back one week — tentatively. If the U.S. Forest Service isn’t back online by next Wednesday, the race will be cancelled entirely.

Of course rerouted and cancelled races don’t equal the concerns of government employees who are out of work, or disrupted social services that have to cut off supplies to people in need. But it is disappointing for athletes who have trained all year, as well as those who planned to travel to popular destination events and now hold nonrefundable itineraries.

There will likely be long-term implications in endurance sports just as there will be in most walks of American life. Thousands of federal employees who must spend days or weeks in unpaid furloughs will likely have to tighten their budgets, and won’t be able to devote as much discretionary income to sports. Closed public lands also affect many athletes’ training and recreation plans. Time will tell just how deep this shutdown cuts into Americans’ lives, but almost no one will be left unaffected.