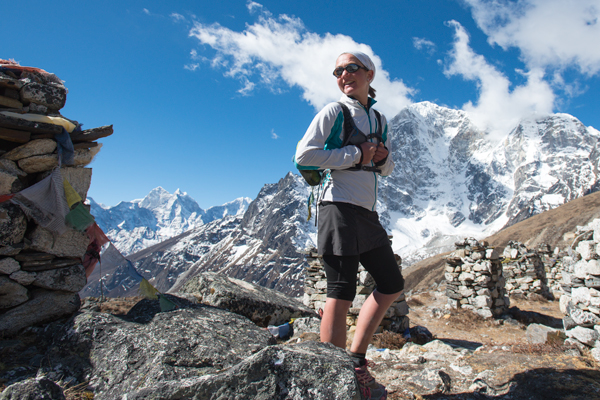 Photo by by Alex Treadway

English ultra-distance runner Lizzy Hawker has enjoyed phenomenal success — she’s the world record holder for the most distance run in 24 hours; she won the 2006 100-kilometer world championships; she holds the record running from Everest Base Camp to Kathmandu, and won the Ultra Trail du Mont Blanc — widely regarded as the world’s premier mountain-ultrarunning event — four times. In 2013, National Geographic named her Adventurer of the Year.

Those who know of her resume, but don’t know her personally, would probably never guess that she never set out to become a professional athlete, never intended to win her first UTMB, and continues to humbly attribute her successes to others — or, when no one else is involved, to the benevolence of the universe as a whole.

Hawker’s modest self-assessment is the main focus of her new memoir, “Runner: A Short Story About a Long Run.” (Currently available on Amazon Kindle.) As Hawker notes in the prologue, the aim of “Runner” isn’t to provide a how-to manual for winning races, offer training tips, or spill secrets of her success. She’s simply examining the ever-present question, “Why do I run?” and telling a few personal stories along the way.

“Runner” is framed in three parts — a Journey of Discovery, about Hawker’s entry into to ultra-endurance running; a Journey of Exploration, about her ventures in Nepal as she gains some prominence on the world stage; and a Journey of Realization, re-examining her values as she copes with multiple injuries. Each part is framed around a specific life-chaning event. Part one details her surprising win during her first attempt at the Ultra Trail du Mont Blanc in 2005. Part two follows her record-breaking run from Everest Base Camp to Kathmandu in 2011. And part three turns inward as she copes with not one, but six different stress fractures in the span of just two years.

The timeline of the book is as meandering as a network of Himalayan trails, and not always well-marked. Especially in part two, where she addresses numerous adventures in Nepal, I often couldn’t differentiate the present run from past events that she reflected on along the way. Readers who prefer a well-defined plot may find Hawker’s writing style frustrating. The transitions between memories are often murky, as her stream-of-consciousness takes her from her work as a research scientist in Antarctica, to her childhood in London, to running her first marathon, without even pausing to catch her breath. If anything Hawker’s writing style is honest in its depiction of the flightiness of memory, and the reality that in long runs — much as in life — progression is rarely linear.

“Runner” is also full of emotion: Bemusement as Hawker accidentally wins her first UTMB and realizes she has “an uncommon endurance.” Humility as she builds up her impressive running resume. Joy as she discovers the wonder of the high Himalaya; bewilderment as stress fractures accumulate and her body fails her again and again; and peace as she acknowledges that her mind and body are inextricably linked, as she must reconcile the needs of both always.

I’ve run in Nepal and participated in UTMB (although the UTMB I completed was the 2012 version, where weather forced organizers to reroute the course and shorten the race to 110 km from 168 km. Hawker won this year as well, but lamented that “anything but the route around Mont Blanc is not UTMB,” a sentiment with which I wholeheartedly agree.) These personal connections drew me into Hawker’s story, but admittedly left me longing for more descriptive passages. It sometimes feels as though Hawker has invited readers along as passengers on her journeys, but instead of letting us look out the window and enjoy the view, she holds our attention with a monologue of memories and inspirational quotes until suddenly the ride is over.

Hawker draws much of her perspective from eastern philosophies, and part three is heavy on aphorisms as she strives to impart the wisdom she’s gained on her journeys. It can feel a bit heavy-handed at times, but it does provide insight into the mind of someone who is truly a “Runner.” Hawker lives and breathes running, so much so that wins and sponsorships mean very little compared to the act of moving through the mountains on her own two feet, exploring both the world around her and her inner landscape. Injury forces her to confront the core of her identity, and her observations are valuable to anyone who pours their heart into an overarching passion — be it running, art, music, engineering, or science.

While Hawker certainly has “uncommon endurance,” her thoughts and emotions carry universal wisdom. For the insight this book provides into the mind of a passionate runner on an uncommonly long run, “Runner” is a recommended read.