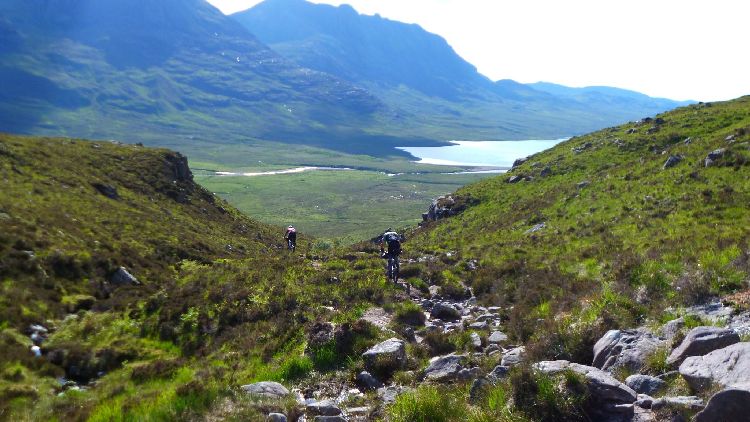 Riders on the Highland Trail 400 route. Photo from highlandtrail.net. 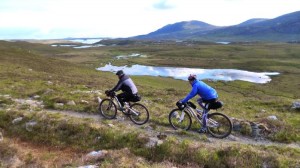 It’s a land of fine mist and green heather, of sparkling lochs and rugged mountains, of wide valleys and narrow singletrack — a veritable paradise for bikepackers. A group of United Kingdom cyclists put together a new 430-mile route through Scotland, featuring a mixture of rocky singletrack, remote country roads, and hunting-grounds doubletrack. The mountain biking route offers a grand tour of the Scottish Highlands.

U.K. endurance cyclist Alan Goldsmith developed the route while he was training for the Colorado Trail Race. As he explored the region on his mountain bike, he concluded the Highland Trail was a world-class route in itself — a 700-kilometer figure-eight loop with 14,800 meters of climbing. Goldsmith put together a group event that follows the spirit of other self-supported bikepacking races — offering a suggested start time and established route, but every other detail is up to the rider. Riders are responsible for navigation, rest schedules, resupply, and their own safety. All outside support is prohibited, and rankings will be given to any rider who completes the entire route in eight days or less.

“The majority of the route is on excellent trails, but includes some very techincal sections, and everyone should expect some hike-a-bike. Even the best climbers and technical descenders will find terrain beyond their ability,” Goldsmith states on the Highland Trail Web site.

There are 43 riders signed up for the May 25, 2013, start in Tyndrum. Cyclists interested in an individual time-trial on the route are encouraged to do so, but Goldsmith recommends May and June as the ideal months to tour the region. Scottish weather is known for its volatility, and blue skies can turn to sheets of rain and snow within minutes. There also is a potentially dangerous river crossing that riders can assess and take an alternate, longer route around. Cyclists attempting the route should be prepared for four-season weather even during the summer, but they can also expect stunning scenery, brutal climbs, giddy descents, and enduring memories. GPS tracks, a rudimentary map, and a report from a June 2012 reconnaissance tour are available on the Web site. For more information about the Highland Trail 400, visit www.highlandtrail.net.