Eric Larsen rides his Surly Moonlander while training for a bicycle expedition to the South Pole. Photo by Stephanie Scott.

It’s the last continent no one has traversed solely by bicycle — enveloped in all of the mystery, challenge, and risk of a true first discovery.

Eric Larsen, already a seasoned polar explorer, wants to become the first to ride a bicycle from the Antarctic coast to the South Pole and back. His journey is set to begin at the Hercules Inlet on the southern summer solstice, Dec. 21, and continue for 750 icebound miles to the Geographic South Pole. From there, if conditions permit, Larsen will turn around and ride back to the coast. Unlike the hybrid ski, kite and bike journey undertaken by British television personality Helen Skelton earlier this year, Larsen’s expedition is entirely self-supported, and he will rely solely on his bicycle for transportation. If he completes the journey, he expects it will take just over a month.

The expedition, dubbed Cycle South, will also be the first to employ a standard fat bike — a Surly Moonlander with a steel frame, 4.7” tires, and 100mm rims. The Moonlander is the “fattest” commercially produced fat bike on the market, offering the maximum amount of float over the dry, wind-compacted snow that Larsen will encounter on his journey. Although the distance and famously brutal Antarctic weather initially appear as Larsen’s biggest challenges, as a snow biker, my first concern was the condition of the surface snow. What is it like? Is it dry, wind-driven powder, like a bottomless pit of sand? Is it a compacted crust with sandstone-perfect traction? Is it ice-hard sastrugi, an endless sea of white boulders? As any snow biker understands, brutal weather and long distances are surmountable obstacles. But 750 miles of wading through bad snow with a loaded anchor is not. 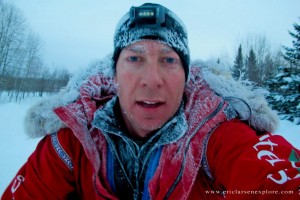 Eric Larsen captures a self-portrait while riding in the 2011 Arrowhead 135 in Minnesota.

I wrote to Larsen to ask him about it, because he would know. His journey has a high chance of success because he’s so experienced. He’s spent the last fifteen years traveling through the cold and remote corners of the world. He led his first expedition to the South Pole in 2008, and is one of only a few who have skied to both the North and South Pole. In 2010, he became the first person to go to all three of the Earth’s “poles” — the North Pole, South Pole, and the top of Mount Everest — in one year’s time. He also has some experience with endurance snow biking, completing the Arrowhead 135, a 135-mile winter race in northern Minnesota, in 2011. All of these experiences led him to believe that riding a fat bike across Antarctica was entirely possible.

“There is a possibility of soft sugar snow, but you have to remember that Antarctica is a desert,” Larsen said. “It doesn’t really snow that much. Therefore, the snow that is on the ground is generally wind-packed and hard. There are soft layers on top — at times, but for the most part the base is stable. The snow is also very dry, like sand paper at times, and provides substantially more traction than wet snow.

Larsen referred to this video of one of his ski expeditions in Antarctica, showing skiers scooting over a concrete-like surface and gingerly stepping across the sastrugi — conditions that, from a cursory glance, do look friendly to fat bikes. But what about the extreme cold? Summer temperatures can drop as low as minus 50 Celsius, which is likely to affect the various moving parts of a bicycle that haven’t been widely tested in those extremes. Sludge-like lubricant, seized headsets, slipping hubs, and split tubes and tires come to mind. I asked Larsen what mechanical challenges he anticipated, and how he prepared for these contingencies.

Eric Larsen preps his Surly Moonlander for the rigors of Antarctica.

“Basically I have a simple philosophy about gear on expeditions,” he wrote. “Anything that I think is going to break, I take a spare: chain link, tube, tire, pedals, brake/shift cable housing. For everything else, I try to think about how it might break and bring parts to fix it with. I think my biggest concern during this trip is bearings — I will replace all the hub and bottom-bracket bearings before my departure. I’ll also have a spare set of wheels standing by at Union Glacier, (a) base camp in Antarctica. The freehub is obviously a concern, but with the Moonlander I can switch the front and rear wheels.” (Freehubs are known to freeze in subzero temperatures, making it impossible to engage the rear wheel. Larsen’s Surly Moonlander is set up with interchangeable wheels so that if the rear hub freezes, the front hub can be connected to the drivetrain.)

Larsen is preparing to prevent bicycle breakdowns, but what about his engine? His schedule appears ambitious. Larsen expects to arrive at the South Pole around Jan. 12, giving himself 22 days to travel 750 miles, or about 34 miles a day. Although this doesn’t seem like a vast distance on a bike, snow bike travel is slow in the best of conditions; in the worst, it can be glacial. South Pole ski expeditions generally take anywhere from 40 to 60 days, and Larsen’s 2009-10 journey involved 50 days on the continent. For his bike expedition, Larsen plans to keep a rigorous schedule of eight hours of sleep, four and a half hours of camp-setup, cooking, and other maintenance, and eleven and a half hours of pedaling with several fifteen-minute breaks.

“Polar/expedition travel is like a chess game; you have to make all your moves very carefully so that you have enough energy to make it to the finish line,” he said. “I call it death by a thousand cuts — each day you lose a little bit of energy that you never get back. Therefore, anything that I can do to be efficient is going to save time and energy and ultimately increase my chance of success. Because I have a relatively finite amount of supplies, I can’t really afford to push more than my schedule allows. The schedule provides structure to stay motivated and it creates short-term goals to work toward during the day. To think about the finish line at the start, when you’re dealing with such huge spaces, is overwhelming.”

I asked Larsen if he expected weather delays, or planned to push for longer hours and more mileage on good-weather days. 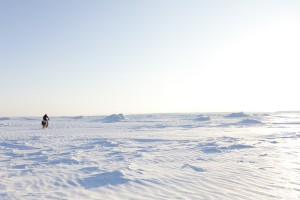 It’s a big, white world out there. Photo by Stephanie Scott.

“The weather is always bad in Antarctica. Okay, maybe not always … but there is always the chance of it changing and getting worse,” he said. “I’ve completed full traverses to the South Pole two times and one ‘last degree’ expedition. I rarely, if ever, worry about the weather or get a weather forecast (if one is available) and have never stayed in the tent due to bad weather. Antarctica is the coldest and windiest place on the planet so to hope for anything other than that is pointless. That said, it’s summer in the Southern Hemisphere so the cold isn’t as extreme as the Arctic. The coldest temperatures will be roughly -35 (up to -50 with the windchill). Honestly, it’s not as bad as it sounds. It’s a dry cold (seriously)!”

“The only real weather condition that will keep me from biking is whiteout — where the light turns flat and it is impossible to distinguish sky from snow. In those conditions, it’s impossible to travel in a straight line and will be impossible to balance on a bike. Luckily, most severe whiteouts only last a day at the most.”

Larsen said the aim of his Cycle South expedition is “to combine adventure and advocacy to demonstrate the many ways in which people can use a bicycle to protect our environment as well as improve the quality of our lives.” There’s little doubt that he’ll come back with an incredible story to tell. We’ll be following his progress on Half Past Done. Check back at this site for updates, as well as an article about his gear and food. His Cycle South Web site is http://ericlarsenexplore.com/expedition/cyclesouth.