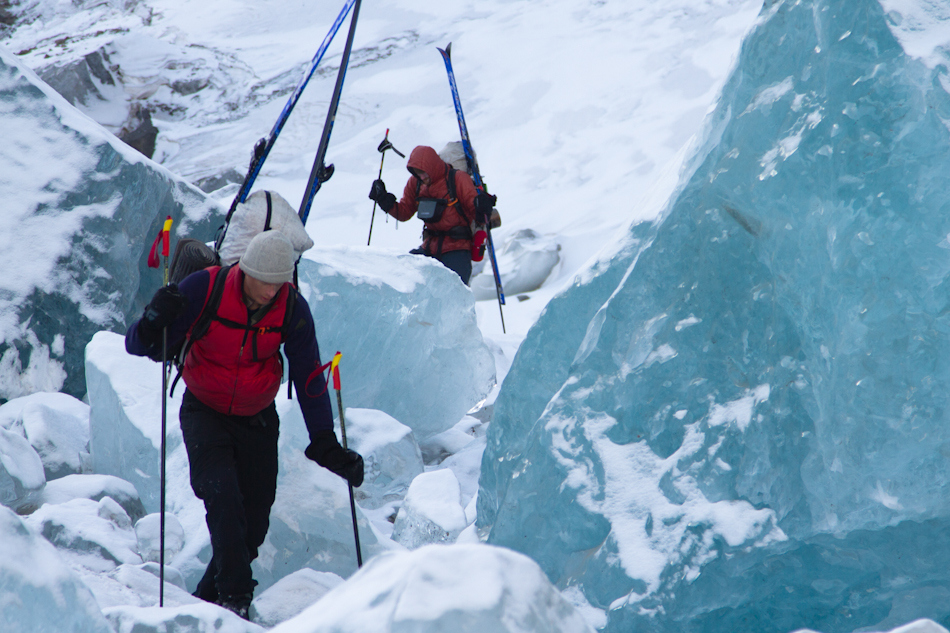 Josh Mumm and John Sykes negotiate ice boulders on the Nebesna Glacier during the 2013 Alaska Winter Wilderness Classic, an approximately 170-mile traverse of the Wrangell Mountains. Photo by Luc Mehl.

Eben Sargent declares this plummet down an ice fall to be a “no go.” Photo by Luc Mehl.

The Wilderness Classic is a unique for an endurance race in that there is no fixed route, no support, no gear requirements, and very few rules. The race sets a starting point, a finishing point, and leaves racers to their own devices and decisions for everything in between. Racers determine their route, supply and carry all of their food and gear, and even choose their own equipment. Minimal rules only require that racers cross the designated mountain range (rather than go around on roads), and be human-powered and entirely self-sufficient the entire way. The summer version of the event is famous for unique equipment combinations such as mountain bikes, packrafts, and even skis. The equipment of choice for the winter race is always skis, but competitors also might opt to take “shortcuts” via mountaineering routes that feature technical climbing. If racers encounter problems, they are expected to find a way out on their own. Rescues “cannot and will not be promised or offered.”

Six different routes with several variations therein were presented as potential options for this year’s “course” from McCarthy to mile 96 Old Tok Cutoff Road. The routes ranged from approximately 150 to 190 miles with varying technical requirements. Mehl’s team opted for the “President’s Chair” route, one of the options where solo travel was not permitted because of technical crossings that necessitated a mandatory two-person-rope-team minimum. It was also one of the shorter routes, although Mehl estimated his team ultimately traveled about 170 miles over the course of four days, averaging 40 miles a day. Their 30-pound backpacks included minimal glacier gear. 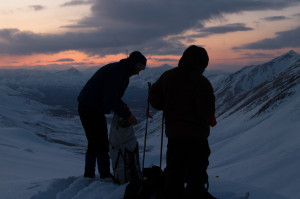 “The weather and snow conditions were great,” Mehl said. “John and I were able to coast behind the trail-breaking power of Josh and Eben. It freed John to take care of his blistered feet and me to pull out the camera more often than usual.”

Mehl said that blue skies and relatively warm temperatures greeted the sixteen racers at the Easter Sunday start, and everybody was in good spirits. The Fairbanks team of Andrew Cyr, Aaron Wells, Danny Powers, minus one team member (Tyler Johnson, who bailed early in the race), finished second after a 22-hour push to the finish. Their approximate time was 4 days and 17 hours. Two women, Danielle Pratt and Paige Brady, were thwarted after Pratt fell in crevasse and dislocated her shoulder.

“Paige’s strength and Dave Cramer’s incredible organization got them to the Tok emergency room after one sleepless night on ice,” Mehl said. “McCarthy guide Scott Peters traveled with our crew effortlessly despite being on slower skis and carrying more weight. We split paths where he went up the Skolai drainage to complete the rest of the course solo.” 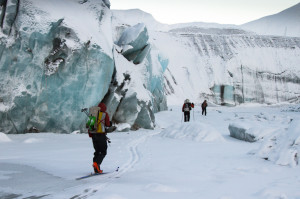 Wilderness Classic newcomers Katie Strong and John Wros also finished on the technical President’s Chair route. “Katie is the first woman to finish in the six years that I’m familiar with,” Mehl said. “It is rumored that she didn’t even get blisters.”

“Team Heavy,” consisting of Rob Kehrer and Greg Mills, and Chris Zwolinski are potentially still out on the course as of Monday afternoon. The deadline to finish is midnight April 10.

Dave Cramer of Summit Consulting Services has taken charge of organizing and planning the Alaska Mountain Wilderness Ski Classic race since its inception nearly three decades ago. The location of the race is moved every three years, and in past years has required a traverse of the Brooks Range, the Alaska Range, and the Chugach Range. Before this year’s race, Cramer told the Fairbanks-Daily News Miner that he expected this year’s ski classic to be one of the most difficult events yet.

“This will probably be the toughest one anyone has ever done because of the combination of distance and the fact this particular piece of country is not easy, even taking a lower route,” Cramer said.

Mehl said that his team enjoyed near perfect spring conditions this year, and had a good partnership in place with the strongest members taking on the lion’s share of trail breaking work. “I would get frustrated feeling that I don’t contribute if Josh Mumm wasn’t so humble about his strength,” he said.

“The highlight of the course for me was descending the Nebesna Glacier via a meltwater channel,” Mehl said. “The snow cover was very thin, and not having crampons we didn’t consider traveling down the bare glacier ice. The meltwater channel pinned out several times, but traveling within its walls of blue ice was spectacular.”

Official results will be posted at http://www.scsalaska.com/ski at a later time. More information is available at the Alaska Wilderness Classic blog, http://classicreport.blogspot.com. More great photos as well as a promised future video can be seen at Luc Mehl’s Web site, http://thingstolucat.com.