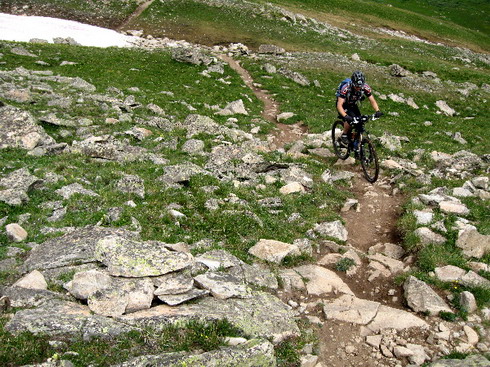 Photo by Mike Curiak, from bikepacking.net. Learn more about biking the Colorado Trail at this link: http://www.bikepacking.net/routes/colorado-trail.

Dark and early on Sunday morning, nearly 70 mountain bikers begin the Colorado Trail Race, a 550-mile bikepacking race through the Rocky Mountains. Unlike the Great Divide Mountain Bike Route, the Colorado Trail features many miles of singletrack — sometimes technical, sometimes unrideable, but almost always stunningly beautiful. It’s the kind of challenge that rewards strong climbers and fearless descenders — who are also willing to put some miles on their feet and endure serious sleep deprivation.

This year’s race begins in Durango and makes its way over 13,000-foot alpine passes and across high valleys on a rugged route to Denver. Along the way, mountain bikers will face about 75,000 feet of climbing, and variable amounts of “hike-a-bike” — a term used for sections of trail that are not rideable, either because of technical obstacles, steepness, or simply extreme fatigue. Reports have ranged from 50 to more than 100 miles of such terrain, depending on who you ask. And considering that “hike-a-bike” paces rarely rise much above 2 mph, that’s a decent amount of time on your feet.

This is the seventh year for the Colorado Trail Race, but the first time it has been run west to east. It’s a grunt right out of the gate; riders will leave Durango and immediately begin the climb up Kennebac Pass, 4,000 feet into the sky. The first real point of resupply is Silverton, about 84 miles and more than 20,000 feet of climbing away. The race begins at 4 a.m. to accommodate faster riders who want to gun for Silverton before the shops close. Those who don’t think they’ll make it are starting the ride with more than three days worth of food, enough to take them past Silverton in the darkness of Sunday night and onto the next resupply point, as many as two days later.

This year’s field includes five women and 72 men. Twelve people are riding individual time trials, which means they began at different times or from a different location than the group depart. Most of the ITTs are westbound riders, starting in Denver. Among those lining up for the group depart in Durango are Stephen Griebel, the original organizer of the Colorado Trail Race who will be participating in his third CTR ride; Pete Basinger, another early adopter of self-supported bikepack racing who will be gunning for his first CTR finish; “Triple Crown” attempters Forest Baker and Eric Foster, as well as Max Morris, who also was going for a Triple Crown after finishing the Arizona Trail Race 750, but did not finish the Tour Divide. Fast veterans in the race include Jesse Jakomait of Colorado Springs and course record holder Jefe Branham, who in 2012 achieved something no one thought possible – a sub-four-day finish. He reported sleeping fewer than three hours in 3 days, 23 hours, and 38 minutes of intense riding.

The women’s course record, set by Eszter Horanyi in 2011, is 5 days, 5 hours, and 27 minutes. The only female veteran this year is Christina Nacos, who will be riding an ITT from Denver to Durango.