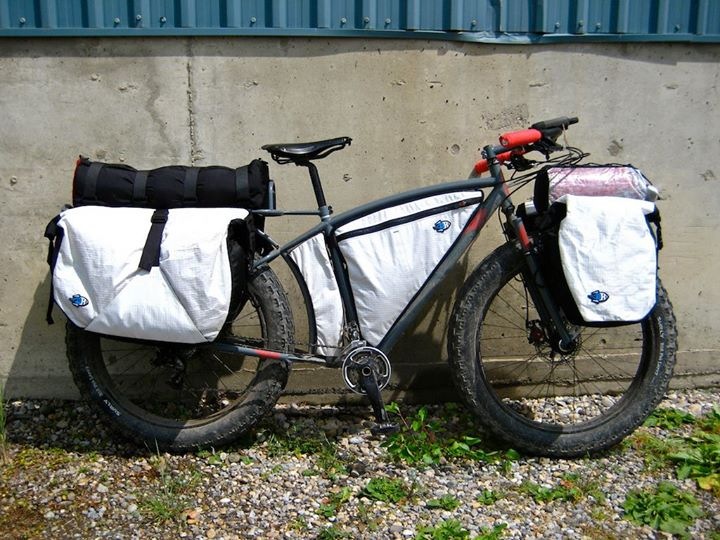 Scott Felter’s fully loaded fat bike is shown prior to the trip. Photo by Scott Felter.

Adventure cyclists Scott Felter — the creator of Porcelain Rocket custom bicycle bags in Alberta — and Tom Walwyn — a pediatric oncologist raising money to help find a cure for medulloblastoma — have spent the past three weeks making their way across a remote edge of Western Australia’s Outback on fat bikes. Their roughly-2,000-kilometer ride of the Canning Stock Route is only the fourth bicycle expedition to attempt the sandy, remote route unsupported. 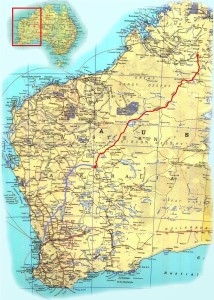 Water along the Canning Stock Route is scarce, resupply points are nonexistent, and the soft and corrugated sand of the dual-track makes for slow and difficult riding. The lack of supplies requires unsupported riders to transport food for 30 to 35 days and as many as five days worth of water. To do so, Felter and Walwyn are using custom-designed fat-tire cargo bicycles with an elongated back end and equipped with bags designed by Felter. The two originally expected to complete their ride on August 15, 25 days from their departure, but it appears from their Trackleaders tracking page that they are still a few days out.

The Canning Stock Route is one of the most remote tracks in the world. Stretching about 1,150 miles across western Australia’s outback, the route was historically used to drive cattle across the Great Sandy Desert. From 1908 to 1910, workers constructed 48 wells along the route to provide access to extremely limited water sources along the way. The soft, sandy track fell into disuse after 1959, until 1968, when the entire length of the track was driven for the first time. Today the Canning Stock Route is utilized as a challenging four-wheel-drive route.

The route has only been traversed human-powered a handful of times; the first successful walk of the Canning Stock Route was in 1976 by New Zealander Murray Rankin, after the driving the route with a Land Rover and establishing food depots along the way. Drew Kettle walked the route in 1994, and in 2004 Kate Leeming completed a successful cycling trek. In 2005, Jakub Postrzygacz became the first personal to ride the entire track without backup, traveling alone for 33 days. He used fat tires and a single-wheel trailer, carrying all of his food with him. The route has since been ridden unsupported in 2009 and 2011.

You can track Felter and Walwyn’s ride at http://trackleaders.com/csr and learn more about it at http://bicyclenomad.com/canning-stock-route.

One thought on “Riding fat bikes across the Outback”