Cold feet are the bane of any cyclist who rides when the mercury drops below freezing. Sitting in a saddle and spinning pedals does not promote circulation in the lower extremities, and cyclists are more prone to cold toes than skiers, runners, snowshoers … really, all other winter sports enthusiasts. As such, the niche but growing market of cold-climate cyclists who don’t want to hang up their bikes for the winter has spurred a few specific products, such as Lake winter cycling boots

Using heavily insulated, vapor barrier layers should be enough to trap heat and keep toes warm. Simply armoring the feet often isn’t enough, however, because body parts do not operate in their own closed system. Even slight drops in a person’s core temperature will cause the body to concentrate circulation around vital organs, robbing heat from the unessentials such as fingers and toes. The balance of keeping one’s core temperature sufficiently warm without sweating profusely and causing vapor to freeze around clothing is a difficult one to strike, made even more difficult by the fact that each individual has unique needs and there’s no single universal solution. 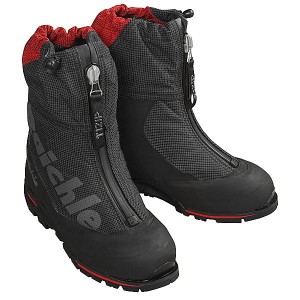 But back to feet — assuming one does have the perfect system to vent sweat and keep out cold wind, what is the best way to keep those inactive toes toasty warm on cold metal pedals? I’m not a clipless pedal rider and have never tried Lake boots, but I do use something similar — an “All Degree” mountaineering boot made by Raichle. These boots are made of thick leather with a built-in waterproof overboot, and Thinsulate insulation rated to 60 below zero. I’ve been using these with what I consider reasonable success since 2007, but they’re nearly seven years old now, the Thinsulate insulation looks worn, and I’m in the market for a new foot system. The question is, what system should I use?

The main problem with hard boots is their hardness. Feet are held inside such boots like a cast, and they don’t flex or move as well, which can reduce circulation. As long as the body’s core stays warm, this often isn’t a problem, but bursts of wind or sudden drops in temperature can cause the body to suck heat away from the toes like a straw. Once this happens, it’s much more difficult to return heat to the extremities. The quickest way to do so is to jump off the bike and run for several minutes, but in hard boots this motion doesn’t translate to rapid movement in the foot muscles themselves. Feel remain encased in their own cold shells, and even running can feel frustratingly ineffective at warming feet in extreme cold.

Still, I’d maintained that hard, waterproof boots are the way to go, until last March, when I took a trip to Nome, Alaska. My plan was to greet my boyfriend at the finish of his 1,000-mile expedition on foot in the Iditarod Trail Invitational, and I only brought minimal winter gear, thinking I wouldn’t spend much time outdoors. However, as it turned out I arrived two days early, and the friend who I stayed with allowed me to borrow his fat bike so I could embark on rides on the Iditarod Trail. At the time, Nome was experiencing an early-spring cold snap, with morning temperatures around 25 below zero F, and a stiff north wind that drove the windchill down another 20 degrees or so. It was frigid, at times close to the coldest temperatures I’ve experienced for longer blocks of time. Still, I had never before visited Alaska’s west coast, and was aching to do some exploring. I would enthusiastically head out for six-hour bike rides, but the only thing I had to wear on my feet was a pair of Montrail Mountain Masochist trail-running shoes

with Drymax liner socks and an older pair of RBH Designs vapor barrier socks — not exactly the ideal footwear for extreme cold.

My system was so not windproof that I could feel the frigid breeze tearing through the vents in the shoes’ uppers, despite a waterproof Gortex coating. I was certain my feet would freeze within minutes and I’d be forced to turn around. To attain more comfort for what would likely be a short ride, I wiggled my toes and flexed my feet as I turned the pedals. The soft shoe allowed me to work a wider range of motion into the small pedal-top space I had to work with, and soon I my toes felt satisfactorily warm again. With these occasional “foot exercises,” I was able to keep my feet comfortable for the duration of the half-day ride over 35 miles of packed snow on the Iditarod Trail, in temperatures that were consistently well below zero with windchills around minus 20 — wearing trail-running shoes.

I’m not suggesting that dancing around on platform pedals is an ideal solution to the cold foot problem. But it has got me thinking about adjusting my foot system to something more flexible to allow for more foot movement. Perhaps a winter hiking boot with a tighter, windproof and waterproof overshoe? Loose, flopping overshoes are also less than ideal for the inevitable bike pushing and hiking that often comes with any longer winter ride on snowy trails. But a flexible shoe or soft boot with an integrated overboot would be ideal. Does such a thing exist? I’m still looking into it.

Are you a winter cyclist? What is your solution for riding in cold temperatures?

5 thoughts on “Feet and winter cycling”