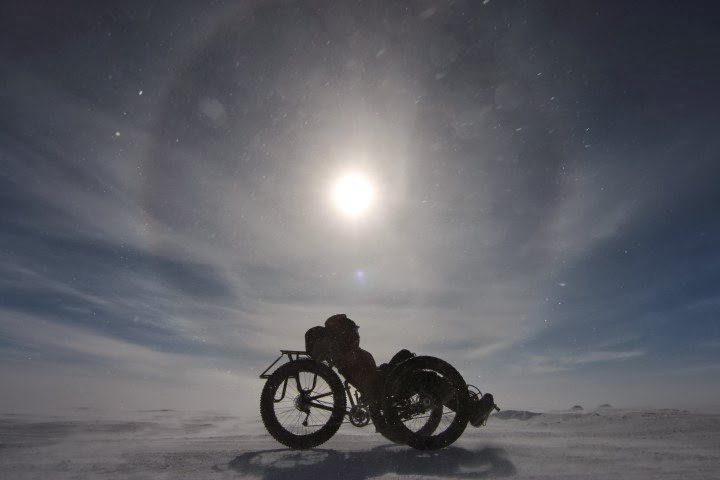 On the day after Christmas, 35-year-old British endurance cyclist Maria Leijerstam became the first person to cycle from the Antarctic Coast to the South Pole. Using a specially designed recumbent tricycle and starting at a virtual shoreline near the base of the Leverett Glacier on a research station resupply route called the South Pole Traverse, Maria completed her 400-mile ride in ten and a half days.

“First person in the world to cycle the entire way to the South Pole,” she posted on her Twitter account. “I peddled (sic) every metre!”

Leijerstam won the media-driven but otherwise mostly non-existent “race” to the pole between her two men on traditional fat bikes, American Daniel Burton and Spaniard Juan Menendez Granados. Both men started more than two weeks before Leijerstam at the more traditionally traveled South Pole route, which is closer to 700 miles in length and also starts at a virtual shoreline at the ice-bound Hercules Inlet. The men are still at least two weeks away from the South Pole, and were still slogging away between 85 and 86 degrees latitude while Leijerstam made her way back to the coast as a passenger in an Arctic Truck. For a bit of perspective, Leijerstam started her journey near Latitude 85.

Leijerstam credited the aerodynamic design of her tricycle, meticulous planning, focused training, and a carefully chosen route for her success. While not a traditional highway by any stretch of the imagination, the South Pole Traverse was developed for vehicular traffic by filling in crevasses and flagging the route around more difficult obstacles. It’s also used fairly regularly during the summer by a convoy of giant tractors, creating tracks that would offer a packed, feasibly faster and smoother surface than the sun- and wind-affected crusts of untrammeled snow.

The South Pole Traverse makes sense for human-powered travel as well, but it has not seen much use from adventurers because passage on this route can be significantly more expensive. Antarctic Logistics and Expeditions, a company that provides expedition support and tours to the interior of Antarctica, bases its operations on the Hercules route. The company charges a much higher fee to support any other part of the continent. Leijerstam’s expedition had a number of sponsors and was filmed for an upcoming television documentary.

Although she started out the expedition unsupported, meaning she was carrying all of her food and supplies for the duration of the journey, after three days of climbing more than 2,000 meters up the Leverett Glacier, she made the decision to unload all of her gear on the trucks that were shadowing her and filming the journey.

“Made the tough decision to unload my kit mid morning as my pace meant i would miss my cut off,” she tweeted.

What’s strange about this decision is that Leijerstam reached the South Pole in ten days after originally predicting that the journey would take twenty days. It seems like she was never behind schedule but opted to give up her unsupported status all the same, possibly in the interest of establishing a stout speed record. And, indeed, after she completed her journey, her support team touted two world records — not only being the first person to cycle to the pole, but also beating all other human-powered speed records.

ExplorersWeb, viewed as the top resource for polar expeditions, was quick to dispute the speed claim.

“This is a motorized expedition and should not be compared to man-hauling skiing expeditions,” the organization wrote.

ExplorersWeb tends to show no love for supported expeditions, and is quick to dispute or clarify claims of heavily media-hyped achievements, such as British television personality Helen Skelton’s “kite-ski speed record” during her 500-mile Antarctic journey in 2012. And, indeed, Leijerstam’s expedition had some of the unfortunate markers of a television stunt — extreme secrecy until the expedition actually started, press releases strung with superlatives and some inaccuracies, and, of course, the presence of a film crew. As a fan of Antarctic adventures and a fat bike enthusiast, I’m thrilled that a woman was the first to successfully pedal to the South Pole. However, I’m among those who are disappointed that it was achieved in this style — shuttling to a point hundreds of miles from open ocean, with support crews and cameras shadowing every step (or pedal stroke) of the way, in an expedition so short that, as one forum commenter put it, “there’s not even time for your underwear to start stinking.” Certainly, Leijerstam was the first and executed an impressive plan and a remarkable feat of endurance. Whatever accolades she receives are deserved, but ultimately some of us may end up viewing the resulting media and wondering how much of it was real, and how much of it was reality TV.

Truly innovative adventuring can not be easy in the modern era. It takes several hundred thousand dollars to support some of these expeditions, and as a result adventurers are heavily pressured to produce something tangible for their sponsors in return. No one in the general public will care about the “style” in which something was achieved, so long as there is a tangible achievement. Leijerstam’s world first was exactly that. She did what it took to get there.

On their return from the South Pole, Leijerstam and her team took the Hercules route, making a 1,200-kilometer journey over the ice and passing both of her “competitors’ along the way. The team passed Burton while he was in his tent, but managed to stop and chat with Granados. She reported that he was in good spirits, but cycling has been tough for him. His team wrote: “Juan met with Maria Leijerstam and her motorized equipment (two cars) returning from the Pole. The good news is that the imprint left by those cars can provide the direction and progress of Juan in the coming days.”

It’s true that nothing about Antarctica is as pure as it was in the heroic age of polar exploration, when adventurers such as Scott, Amundsen, and Shackleton were making headlines. Trucks and tractors rumble across the ice as planes buzz overhead. The South Pole is now a massive base with year-round operations, a virtual space station in one of the harshest and most inaccessible regions on the planet. But the mystique and appeal is still there, which is why dreamers will continue to draw on the pioneering expeditions to continue taking bicycles where they’ve never been taken before.