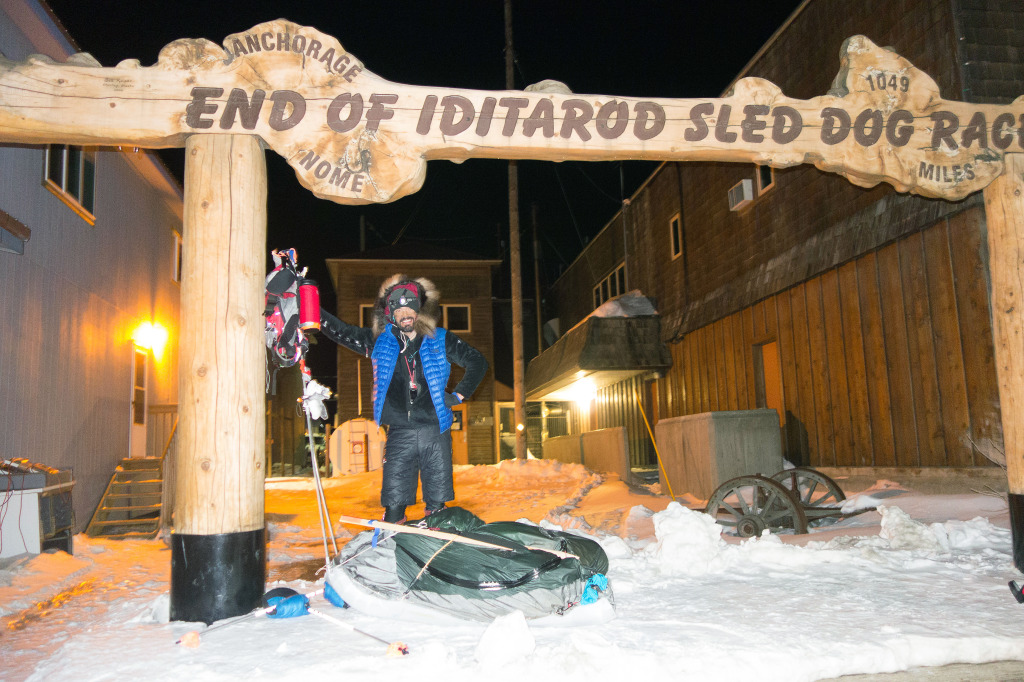 Beat Jegerlehner at the finish of a thousand-mile foot race across Alaska in March 2014. The Iditarod Dog Sled Race is often heralded as “The Last Great Race,” begging the question — what does that make the Iditarod Trail Invitational, where athletes don’t even have the support of a dog team?

Earlier this week, Outside Magazine published yet another list of “The Toughest Races in the World.” These lists have been circulating far and wide in outdoor and adventure-focused media recently, with Competitor Magazine, Adventure Journal, Men’s Fitness, The Telegraph, Red Bull, The Huffington Post, Men’s Health, CNN, National Geographic Adventure, and even the New York Times, which in separate articles has taken the time to bestow the moniker of “The World’s Toughest Race” on The Barkley Marathons, the Otillo triathlon, and The Race Across America.

Besides the obvious click-baiting nature of these lists (which usually make readers advance to a new page for each feature in an arbitrary number of rather arbitrarily chosen races), they also tend to spark dreaming and disagreements, which of course leads to more clicks. If the Tour Divide is included, commenters will wonder why the journalist left out the singletrack-focused mountain bike routes on the Colorado Trail and Arizona Trail. Any list that includes a hundred-miler, but not the Hardrock 100, is considered a joke by many North American trail runners. And while European mountain runners believe that most Alpine courses are many times “tougher” than any organized trail race in North America, they may not disagree that extreme cold-weather challenges and self-supported multi-day races are inherently more difficult.

No one is arguing that the challenges included in these lists aren’t tough. But the rush by race promotors and the media to slap this superlative on a multitude of adventure-focused endurance challenges have ensured the phrase “World’s Toughest” has all but lost its meaning. Beyond the obvious fact that any interpretation of difficulty is highly subjective, there’s also the reality that most of the races included in theses lists are eminently doable by regular people. So how can they be the toughest? There are, after all, plenty of plausible athletic challenges that have yet to be accomplished by anyone. As my boyfriend Beat sometimes jokes, “The toughest race in the world is a marathon with a two-hour time limit.”

For any of these lists, Beat has usually completed at least one of the included races, often more than one, so he’s in a decent position to judge their veracity. But he’s among those who tend to laugh and wave these lists off, while joking about the increasingly contrived efforts of race organizers to establish events as “The World’s Toughest.”

“I know an exquisite patch of poison oak on a steep hill in the East Bay,” Beat jokes. “People can run laps up and down the hill through the poison oak, and the last person to be taken to the hospital will win. Also, we’ll make them carry a refrigerator.”

I’ve thrown out the idea of organizing an “Extreme Epic Ladder 50K.” In my race, competitors will climb up and then down a 10-meter ladder bolted vertically to a wall, 2,500 times. There will be a trampoline at the bottom for safety, but every fall will result in a 10-minute time penalty. “It’s 100 percent vert, a 50K with 82,000 feet of climbing and another 82,000 feet of descent. People will eat that up.”

Beat reminded me that people would like my race even better if the ladder could somehow be 50,000 meters tall, and they could just climb straight into the Stratosphere. “Not much air up there. Way less than Hardrock.”

We joke about it because we’re just as drawn to many of these races as anyone else circulating the articles with the tagline “Bucket List” in their social media. I admit I feel a little bit of pride when races I’ve completed, such as the Tour Divide or the Iditarod Trail Invitational, show up on these lists, and bemusement when La Petite Trotte a Leon never does (that’s the toughest race I’ve ever tried — and failed — to complete.) This is more evidence of the subjectivity of it all, but it also begs a question: Why do I — and clearly so many others — express interest in any recreational experience that could be interpreted as singularly tough? What is it about an “extreme” challenge that’s so intriguing and sometimes addicting?

It’s a question rife with psychological analysis, musings on modern life, social media considerations, and introspection. Which is why it’s also a fun question to present in an open forum: Why do you think these “World’s Toughest” races are becoming increasingly more prevalent and popular?