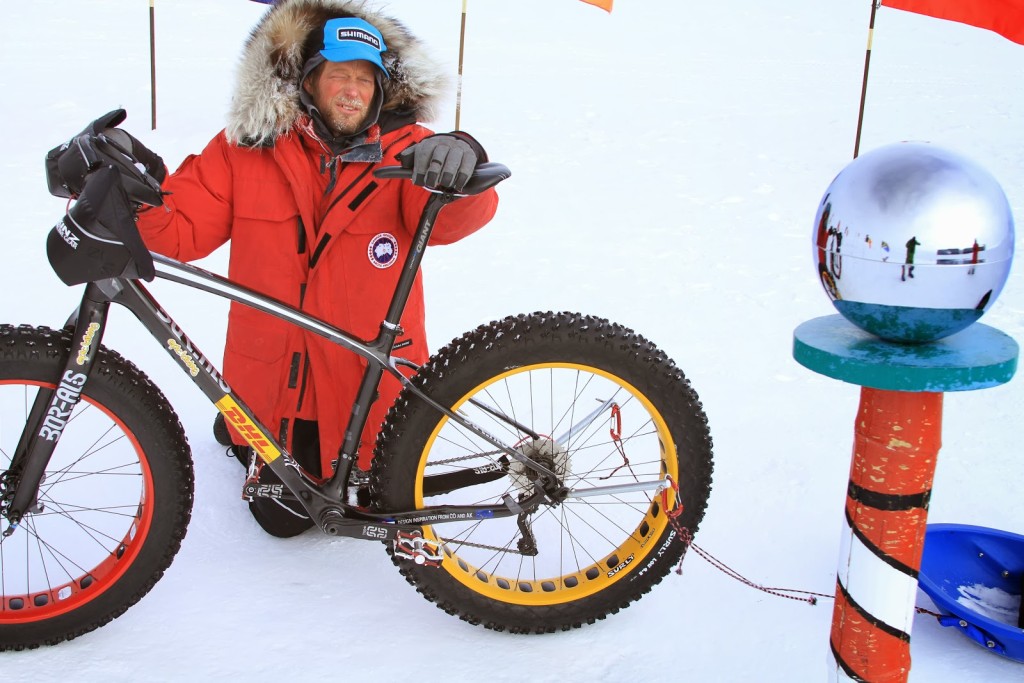 In January 2014, Daniel Burton pedaled a bicycle across Antarctica on an expedition intended to inspire others to “get out and ride.” Burton’s trip to the South Pole was the ultimate example of this — an ordinary guy who dreamed of doing something extraordinary, and then did it.

Burton recently published “South Pole Epic,” a 207-page book about his preparations and journey across the frozen continent. The book compiles handwritten journal entries, blog posts, media sources and forum comments, along with narration from a co-author, Tip Boxell, stringing to them together in a journal-like chronicle of the trip. It reads a bit like Robert F. Scott’s posthumously published diaries, with fewer references to tragedy and more references to gadgets.

Burton’s modern story is remarkable — a 50-year-old former computer programer-turned-bike shop owner, with a wife and four children, one day gets a wild hair to ride a fat bike to the South Pole. With no polar experience, and only a season of winter cycling behind him, he goes about securing funding (largely through an individual loan), supplies, and gear to embark on this massive undertaking. His inexperience earns him a chorus of detractors (who Burton addresses extensively in “South Pole Epic.”) Friends and neighbors tell him he’s going to die. He scoffs at their criticisms and goes to Antarctica anyway.

Burton started pedaling at the Hercules Inlet on Dec. 2, 2013. Over the next 51 days, he pedaled and pushed his Borealis fat bike and two sleds more than 750 miles to reach the South Pole. In the meantime, two other adventurers completed Antarctic cycling expeditions. Maria Leijerstam was the first to reach the pole, riding a recumbent tricycle from the coast along the South Pole Traverse and traveling 400 miles over 10 days. Juan Menendez Granados used a combination of skis and a bike, traveling the same route as Burton and reaching the pole a few days before him. Burton uses his platform to address these concurrent expeditions, laying out his reasons why he still believes his to be the first legitimate cycle expedition to the pole (His reasoning: Leijerstam rode on a maintained ice road and used vehicle support, and Granados only pedaled about 120 miles of the total distance and skied the rest with the bike in a pulk. Burton conjured this number himself based on his own meticulous tally of Granados’ bike tracks in the snow.)

The book leaves no question about Burton feels about the distinction of being the first person to ride a bicycle to the South Pole. However, he doesn’t resort to finger-pointing; he simply lays out his case along with his chosen set of facts, presumably leaving this distinction up to the reader to decide. Burton writes that all three explorers made a claim to the record, and a search of the Guinness Book of World Records Web site lists Leijerstam as “The first person to cycle to the South Pole,” which all of the facts verify (she started at the coast and arrived a month before Burton and Granados.)

That bit of intrigue aside, “South Pole Epic” provides insight into Burton’s process — his family background (including a handful of famous explorers he connected through extensive genealogy), his motivations for making the trip, his strong desire to set a new world record, the financial obstacles, what it’s really like to ride a bicycle on the wind crust of Antarctica, and day-to-day life on a polar expedition. It makes for quick and entertaining reading, and comes across as more candid and casual than most polar expedition literature. Burton’s dry sense of humor is good for an occasional laugh, such as when he loses a mitten again after having it returned to him by a passing truck, or compares the extreme difficulties of pedaling over sastrugi (snow drifts) to hiking to a “Y” on a mountain in Utah.

As a reader, I most enjoyed the excerpts from Burton’s handwritten journal. These offered the deepest glimpse into Burton’s mental landscape as well as his trials — coping with extraordinarily strenuous efforts, facing days of headwinds and whiteouts, navigation difficulties, drifting snow, crashing on car-sized sastrugi, the ongoing struggle to keep himself warm, equipment failures and loneliness.

Burton’s writing style is straightforward with few literary flares. He only lets readers in on a few of his emotions. The included photos help illustrate the stark beauty of the Antarctic landscape, which Burton occasionally describes. After reading the book, I felt like I had a better sense of what it might be like to ride a bicycle across Antarctica, and appreciated that Burton took the time to compile and publish his writings.

However, I do think Burton did his story a disservice by giving his detractors so much ink. Nearly every section of the book includes an excerpt from various Internet forums, and the conclusion of his book is a thinly veiled “I told you so.” I understand that Burton is trying to drive home a point — that a lot of people told him he couldn’t do it, and he did it anyway. As a reader, I feel that he could have addressed this succinctly early in the book and moved on, rather than make it a central point of focus.

Burton’s tale is one of perseverance, learning, and succeeding against odds. The take-home message is worthwhile, causing a reader to conclude, “Wow, if Daniel Burton can one day just decide he wants to ride a bicycle to the South Pole, then do it, maybe I shouldn’t give so much credence to the obstacles standing in the way of my dreams.”

For fans of polar exploration and cycling, “South Pole Epic” is a recommended read.