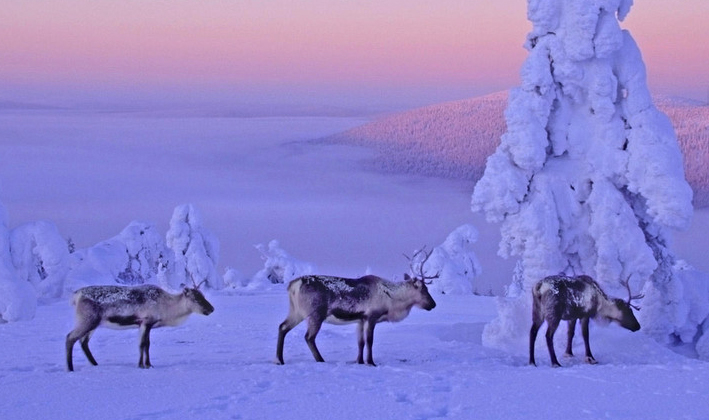 It is said to be the hometown of Santa Claus, but true magic of Finnish Lapland lies in hundreds of miles of largely untouched white wilderness. While the sparsely populated region of northern Finland draws in winter tourists with Father Christmas, Northern Lights viewing, and six months of snow, endurance athlete Àlex Simón Casanovas had a more immersive experience in mind — a 150-kilometer race across frozen lakes, forests, and tundra. 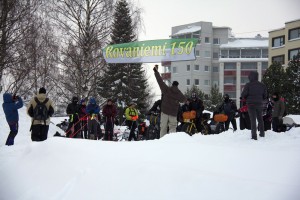 The Rovaniemi 150 is set to begin February 15, with categories for runners, cyclists, and kicksleds. The lollypop route begins in Rovaniemi and traverses the remote terrain to the north on a mixture of groomed roads and trails, all marked. About forty kilometers of the route traverse frozen rivers and lakes. There are nine checkpoints with shelter, campfires, and water along the way.

The cut-off is forty hours, and the prize for first place is a free entry the following year. Rules require competitors to carry mandatory gear including a sleeping bag, pad, headlamp, red flashing light, and reflective patches. Temperatures can drop as low as minus 30 Celsius, so the mandatory gear offers a safety buffer in the event of injury or fatigue.

Casanovas, who has worked as a team leader at the Spanish research station in Antarctica, developed the Rovaniemi 150 in the model of winter endurance races in North America such as the Susitna 100 and the Arrowhead 135. He formulated the idea for the race while competing in the 2011 Iditarod Trail Invitational, a 350-mile race in Alaska. “I realized the forest and landscape there was very similar to that in Finnish Lapland,” he said. He went to Finland and created a route that aligns with the terrain and difficulty of the North American races, in order to appeal to experienced endurance athletes looking to take the next big leap into winter racing.

“The terrain is quite hilly, but not too steep,” he said. “Rovaniemi 150 is open to everyone with experience in marathons, ultra-marathons, and long-distant traverses. Because cold-weather experience is recommended but not needed, the advice we give is to learn how to face the cold weather.”

Casanovas held the inaugural Rovaniemi 150 in February 2012. Of the thirteen starters, only three cyclists finished, all in the 32-hour range. Seven foot racers and three cyclists dropped. 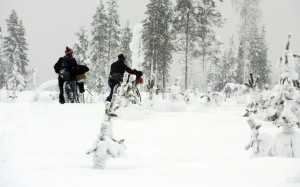 “In the last winter race, weather conditions were bad and very bad, as was the snow quality. We were working on the track for twelve days, but two days before the race temperatures went up, snow was falling, and a south warm wind came. Conditions were very tough, and three finishers had to push their bikes around seventy kilometers. The runners couldn’t keep a good speed average. Temperatures were between −5 and −10C.”

But that’s one of the challenges and some might say the appeal of winter racing — nothing is certain, and everyone must adapt to wild fluctuations in weather and terrain. Information and registration is available at http://www.rovaniemi150.com.

And for those looking for an even more extreme challenge, Casanovas is planning a self-supported race on a 900-kilometer loop through the Lapland wilderness the following year.

The Lapland Extreme Challenge Race is set to begin January 22, 2014, Rovaniemi. There is no set course; racers are only required to check in from a series of checkpoints along the way. It’s a human-powered race, but beyond that racers are required to choose their own mode of transportation, choose their own course, and are responsible for all of their gear and navigation. The only mandatory gear is a satellite tracking device and a mobile phone; all other supplies are up to the individual racer. The January start and subarctic latitudes mean racers have fewer than five hours of daylight to work with at the start, and only two in the north. The race ends February 5.

Registration for the Lapland Extreme Challenge Race opens on September 1, 2013, and entering the long race does require demonstration of prior winter racing or expedition experience. For more information, visit http://www.laplandextremerace.com.