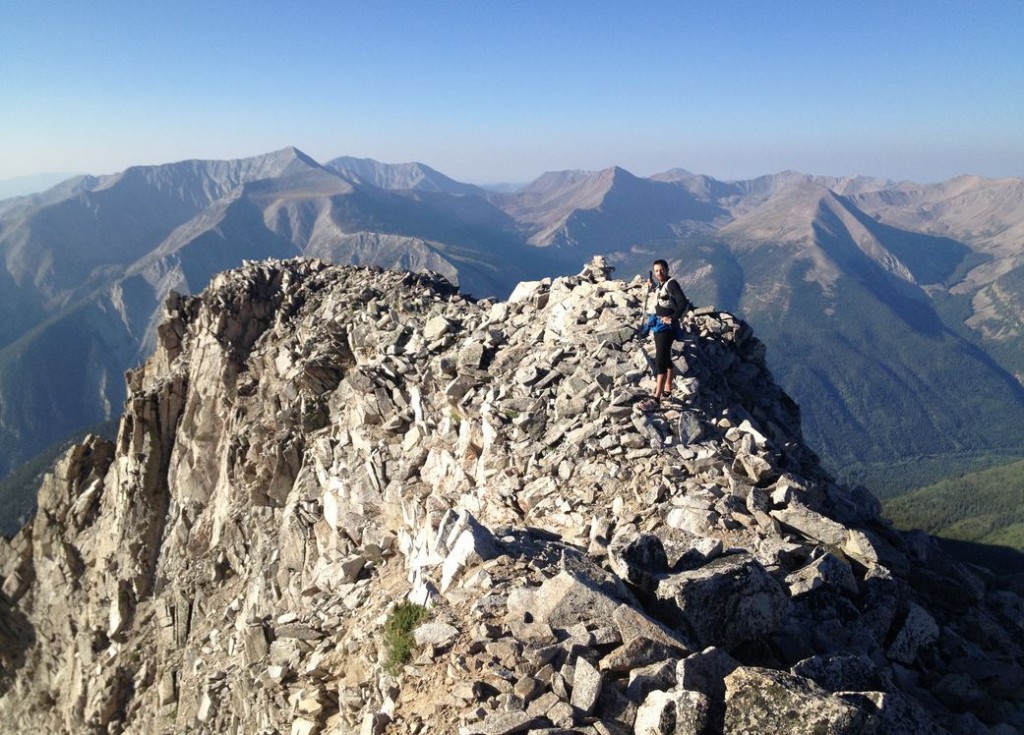 As Jared Campbell stood at the base of Tabeguache Peak, his thirteenth summit in a bid to climb fourteen Colorado fourteeners in a single sixty-hour push, there was only one thought he could piece together amid a swirl of fatigue and confusion — the climb. It was so much bigger than he imagined it would be. A line of boulders, scree, and alpine tundra seemed to stretch beyond the sky. The route was clear but his condition was increasingly murky. His heart rate and breathing felt too rapid for the limited mechanical output he could muster, and his body’s thermal regulation fluctuated wildly without regard for the outside temperature. Whether it was hot or cold, he couldn’t tell, and whether he was simply tired or potentially dying, he couldn’t know, but he did understand one simple idea — he needed to keep climbing.

“My mind instantly flashed to May 9, 2000,” he wrote in his trip report. “I was in my father’s house, surrounded by his siblings, his wife, his mother, and his children. After a long and valiant fight with ocular melanoma, the cancer he had been battling had metastasized to the plural membrane of his lungs, resulting in a very quick and lethal degradation of his health. I sat by his side, my hand on his chest, feeling every laborious breath and heart beat through his last. In incredibly depleted and emotionally taxed states, the memories burned deepest in our souls tend to rise to the surface — clear, vivid, and powerful. As my own heart raced to pull me up Tabeguache, all I could think about was this moment with my father. But the role reversed, and I envisioned him placing his hand upon my chest to help calm my heart and breathing. It gave me strength and focus, and eventually I reached the upper saddle.”

One push up to Tabeguache, elevation 14,162, and other one to Mount Shavano, elevation 14,229, put Campbell and his partner, Matt Hart, at their finish line — a mostly empty parking lot with only their small but dedicated crew to cheer them in. It had been 58 hours and 58 minutes since they set out to conquer this route in the Sawatch Range of the Colorado Rockies, this achievement that few have heard about and exponentially fewer can understand — Nolan’s 14. 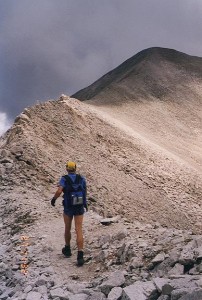 Gordon Hardman approaches the summit of Mount Antero during the first official Nolan’s 14 attempt with Blake Wood and Fred Vance in 1999. The three completed seven summits in 34 to 46 hours.

The idea of Nolan’s 14 formed in 1991, when ultrarunner Fred Vance met a mountaineer named Jim Nolan. Vance asked Nolan how many 14,000-foot summits he could fit in a single, hundred-mile course. Nolan thought about it for a week and came back to Vance with an answer — fourteen — and a map outlining a rough route through the Sawtach Range. The route connected the peaks of Massive, Elbert, La Plata, Huron, Missouri, Belford, Oxford, Harvard, Columbia, Yale, Princeton, Antero, Tabeguache, and Shavano. Nolan advocated a geographically defined course rather than a set route — just a start, finish, and fourteen summits. The approximate distance needed to reach all fourteen summits was between 90 and 110 miles, with something in the range of 45,000 feet of climbing. The experienced mountain runners who first attempted the route in 1999 called it Nolan’s 14. Jim Nolan calls it “The Death Run.”

With no stipulations besides traveling by foot and finishing in fewer than sixty hours, only seven people have achieved the status of Nolan’s 14 finishers in its twenty years of existence. Mike Tilden of Utah, Blake Wood of New Mexico, and John Robinson of Oregon cracked the sixty-hour barrier in August 2001, and Robinson came back to set the “course record” in 2002, which still stands at 54 hours and 57 minutes. Although several mountain runners came close with twelve or thirteen summits — including women Ginny LaForme of New Mexico and Betsy Kalmeyer of Colorado — no one cracked the fourteen-piece puzzle for a decade, until this year. Three runners — Campbell and Hart, as well as Colorado runner Eric Lee — brought the number up to seven. All told, it’s about a 15 percent finisher rate. 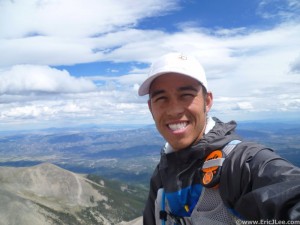 Eric Lee takes a self portrait atop Mount Shavano.

Lee tackled the route with single-minded focus, setting his starting date for late August and dedicating his entire year of training to the goal. He had already scouted the route in pieces, achieving four summits in 2008, five in 2009, and nine in 2011. Between Jan. 1 and Aug. 5, he ran or hiked 1,800 miles with 500,000 feet of elevation gain. For the rest of the month he tapered, studied, and planned. At 6 a.m. August 31, he set out from the Leadville Fish Hatchery, en route to his first peak, Mount Massive, elevation 14,421. He had a small crew at road crossings and a few friends to accompany him on some of the peaks, but in keeping with the aesthetic of the event, he always hiked or ran in front, and often alone.

In his trip report, Lee describes a moment in the pre-dawn hours of day two when he had to decide whether to attempt a rugged bushwhacking route toward Mount Harvard in the dark, or take a nap and wait for daylight.

“Amazingly I wasn’t tired, so opted to try my luck hacking through the forest,” he wrote. “I thrashed my way past several cliff bands and across an ascending traverse southwest. I located a steep grassy gully that looked very familiar, and as the sun rose a smile grew on my face as I realized I’d nailed the ascent route in the dark, only losing a little time thrashing in the brush down low. I trudged my way up the west edge of the north slope, greeted by a huge herd of mountain goats at 13,200 feet, and a fantastic sunrise/moonset behind me. This is what Nolan’s is about — just me, the mountain goats, the soft glow of sunrise illuminating the setting full moon and dead silence. I scrambled the last bit of rock to the summit of Mount Harvard at 7:26 a.m., once again all alone on the summit.” 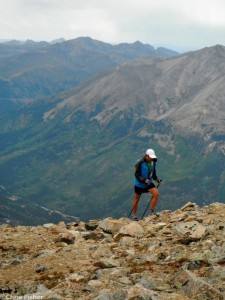 Lee reached the finish in 57 hours and 27 minutes, the second-fastest known time on the route. “The entire 57 hours is a blur, even though I remember every moment it seems more like a dream than a reality,” he wrote. “The tough thing with Nolan’s 14 is that fifty-plus hours is a long time, and most likely something will go wrong. Your legs can give out, your lungs can give out, there are route-finding issues, sleep deprivation, altitude sickness, physical bonks, bad weather, missed crew resupplies. To break the fastest known time would take not only a very strong mountain runner, but a little luck to avoid most of these issues. I have no doubt it can definitely be done.”

Campbell and Hart’s journey wasn’t without mishaps. They mapped out a route that was around ninety miles and initially aimed for a 45-hour finish, starting on Aug. 17. Hart felt weak in the early stages of the route, and Campbell became sick later. Their planned route proved to be unworkable in places, and they found themselves tacking several miles onto several summits when they had to deviate to find a better way, which set them increasingly behind their planned schedule. At least once, they ran out of food and water for hours before reaching their crew. They took two planned naps, each less than two hours.

“Nolans is unique in that many of the routes you take up and down the peaks are not common routes,” Campbell wrote. “This is largely because you’d prefer to keep the route as short as possible, but try to do so while not selecting completely ridiculous routes that would provide an unnecessary thrashing. It’s a tough balance and we certainly did not do it perfectly. But this is why I like the challenge so much — it’s up to you to figure out what route makes the most sense. If you prefer technical terrain, take the class-five ridge connecting Harvard to Columbia. If you think you’re faster or safer boulder hopping, drop off the east side and contour around. And, if you prefer something that resembles a trail, well, I suppose you might be able to figure something else out.”

Campbell and Hart’s route ended up being about 104 miles, with about 46,000 feet of elevation gain. Lee managed a reported 91.5 miles with 47,000 feet of elevation gain. Many of the specifics of their journeys are described on Campbell’s and Lee’s trip reports, but only a skilled navigator with knowledge of the region would have any chance of retracing their routes. And through it all they’d have to manage supplies, crew schedules, nutrition, weather planning, safety, and rest. That’s the true challenge of Nolan’s 14 — it’s not only a physical unravelling; it’s also a logistical nightmare.

But therein lies the intrigue, and the likelihood that more mountain runners and skilled hikers will attempt Nolan’s 14 in the coming years. With a stunning route, a pure mountain line, a minimally supported ethic, and a truly monstrous physical effort, there is much about Nolan’s 14 to appeal to those looking for a life-altering challenge.

“I loved everything about it from the extreme highs to the extreme lows, each providing contrast for the other,” Campbell wrote. “Tackling this with Matt was a real treat and gave me a heightened respect for him as a person and as an athlete. Will I be back? Absolutely.  It truly is one of the finest mountain challenges I’ve experienced to date and there is so much more I need to see, experience and learn in the Sawatch.”