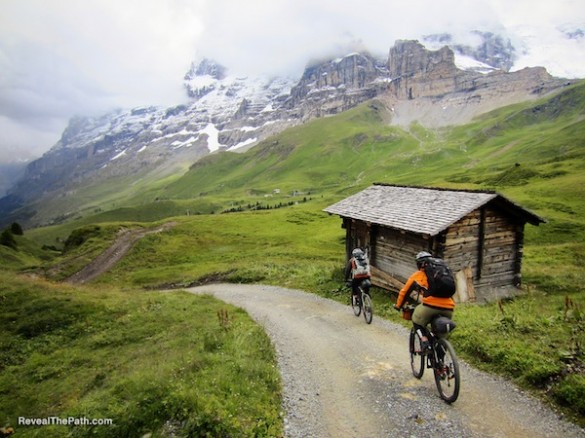 Riders coast along a mountain road in the Swiss Alps while filming the documentary “Reveal the Path.”

As an avid consumer of outdoor media, I’ve read a small library’s worth of adventure books, but I have yet to cultivate a similar passion for adventure films. I think the reason for this is because several years ago, I grew bored. Bored with all of the adrenaline pandering, the “Xtreme” films that were full of superlatives but empty of substance. Bored of gnar-factor focus that seemed to highlight an industry-wide belief that writing, story arcs, and even compelling cinematography were optional. And I admit, in this post-YouTube era, I’ve developed the opinion that this ever-widening pool of adventure movies is becoming more shallow. So I would never claim to be knowledgeable critic of outdoor films. I simply haven’t seen that many.

And yet, I do occasionally stumble across films that seem to have been made specifically for my admittedly esoteric tastes. One of these movies was “Ride the Divide,” a documentary about the 2008 Tour Divide. The film about the 2,745-mile mountain bike race along the Continental Divide was released on DVD around the same time I completed the 2009 event. I ended up watching it with friends only a few weeks after my own Tour Divide adventure. As the story about three people racing the Divide unfolded, I got lost in the images, excitedly pointing out the places I had visited and interjecting my own stories as my friends repeatedly hit the pause button. Because of this, I could never offer an objective view of “Ride the Divide.” I was simply too close to the subject matter. 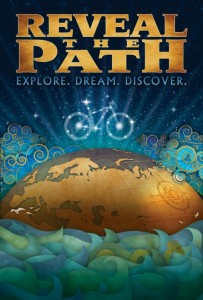 When I learned the filmmakers who created “Ride the Divide” had made another film about cycling adventure, I was excited to see it. “Reveal The Path” is advertised as “a genre-defying adventure film that contemplates what it means to live an inspired life using the bicycle as a mechanism to explore, dream and discover.” Having few preconceptions about the specifics of the film, I expected the same stunning cinematography I had seen in “Ride the Divide,” minus the barrage of memories. I expected to see incredible locations to stage bike adventures, hear a little about the riders’ motivations and background stories, and perhaps see a few impressive endurance moments. After all, the movie featured two cyclists who are well-known in the endurance mountain bike community — past Tour Divide winners Matthew Lee and Kurt Refsnider.

Director Mike Dion offered some background on the film that redirected some of my expectations. “The project was not created with the hardcore cyclist in mind,” he said. “In fact the core audience seems to be having trouble digesting the deeper message. We received lots of emails from folks who, after watching ‘Ride the Divide,’ bought their first mountain bike or started training for their first hundred-mile race. I felt compelled to continue that inspired feeling of hopping on your bicycle and feeling the freedom of travel and adventure it can provide. There is no longest in the world, hardest in the world, pushing yourself to the brink of collapse with this film. My goal was to inspire the casual cyclist or even non-cyclist to want to get on a bike and go somewhere they’ve never been. To explore and dream of possibilities.”

So “Reveal the Path” is not directed at an endurance-focused audience, which is fine. I resolved to view the film from the perspective of a casual cyclist, one who is perhaps feeling uninspired with my hobby and looking for inspiration to try new adventures. And I will say that “Reveal the Path” did make me want to get on my bike right away and explore local nooks that I have yet to visit — just to savor the world around me. The film was consistently gorgeous, the adventure locations were enviable, and the soundtrack was enjoyable. However, the endurance junkie in me was frustrated by the absence of location specifics, the writer in me was disappointed by the lack of character development, and the inexperienced film critic in me wondered if the creators had perhaps focused too heavily on the message, and not enough on the story.

“Reveal the Path” opens with Dion, producer Hunter Weeks, Mike Riemer (who represents one of the film’s major underwriters, Salsa Cycles) and endurance cyclist Matthew Lee enjoying a winter cabin getaway by candlelight and a brainstorming session about the possibilities of the as-yet-unconceptualized film. The overarching question — “If you could ride anywhere in your world, where would you go?” — leads them to a world tour of lush valleys in Scotland, a stage of the Tour de France, the Swiss Alps, the high deserts of Morocco, the rain-drenched Kathmandu Valley in Nepal, and the wild coast of Alaska’s Kenai Peninsula. It’s a dream tour for any adventure cyclist, and the sheer vicarious-living factor is enough for a compelling premise. Endurance cyclist Kurt Refsnider is invited along after he wins the 2011 Tour Divide, a feat that is only briefly alluded to early in the film, and the four set out to “explore, dream, and discover.”

The fact that they’re endurance cyclists and winners of the Tour Divide are just about all we ever learn about Lee and Refsnider throughout the film. Dion and Weeks are also prominent characters, but little personal information is revealed about them as well. A multitude of other characters are introduced, and we end up learning a fair amount about a woman who teaches Kurt how to wash his gloves in a Moroccan river, a farmer named Hari who was their host in Nepal, and Pat and Kathy Irwin, a couple who joined the group on a tour of the Alaskan coast. I can understand that Dion didn’t want to let multiple story lines muddy a relatively brief, seventy-minute-long movie. But I would have liked to learn a little more about the riders themselves.

Another aspect of the film that seemed rushed was the presentation of the filming locations. Rugged trails in Scotland, a beautiful canyon in Morocco, and stunning mountain vistas in the Swiss Alps are all presented generically, as though they were secret locations. Again, I suspect the filmmakers were  aiming not to overload the film with details. And, as a casual viewer, there’s a good chance I wouldn’t care. But as a cyclist, I wanted to vicariously visit these places on a deeper level. I wanted to know where they were.

There are several laugh-out-loud moments sprinkled throughout “Reveal the Path.” While pushing their bikes along a craggy trail in Scotland, Refsinder quips, “Two miles an hour; fifty miles to go today. So we’ll be there tomorrow?” Matt Lee time-trials a section of the famous Alpe D’Huez stage of the Tour de France on his loaded mountain bike and describes the effort in his casual monotone: “It was hard.” And while trying to determine a descriptive for the leech-infested mud they’re mired in while riding in Nepal, Lee decides on “juicy” because “juicy is more positive than greasy.” There are also some fantastic details, such as the sound of slapping feet as barefoot Nepali children chase the cyclists down a muddy road.

Throughout the film, there are moments of introspection from each of the cyclists, reflecting on what it means to “follow the path” as an abstract, self-actualizing concept. Lee often waxes philosophical — “If you try to be to change you want to see in yourself, as you travel, you’re going to be open to more magical experiences.” I felt many of these quotes were vague or statements of the obvious, but Dion later pointed out to another viewer that, for many people, they’re not.

“(Reveal the Path) is about that inspired feeling of … adventure and wanderlust. It seems folks who already embody this lifestyle and know this freedom, feel the way you do about the film (this viewer compared it to “a home movie of someone else’s holiday.”) This is a good thing, because I’m sure you already have amazing experiences from your own adventures. Others, however, are finding a deeper meaning and pick out messages of living life to the fullest and motivation to make a change in their life that involves more time on the bicycle and dreaming of their own adventures.”

Personally, I enjoyed “Reveal the Path” precisely because the filmmakers dared to step out of the adrenaline, travel, and even endurance adventure mold and try something different — a kind of open-ended fantasy scenario for the everyday cyclist. The fact that they’re trying to fit a broad concept into a short seventy minutes does make the story and characters seem underdeveloped. But I suspect this may have been Dion’s intention all along. Like an accompanying “Reveal the Path” book that is full of stunning photographs but light on words, it seems Dion set out to present a visual world of adventure where the ultimate story, and inspiration, belongs to the viewer.

Click here for more information about Reveal The Path.