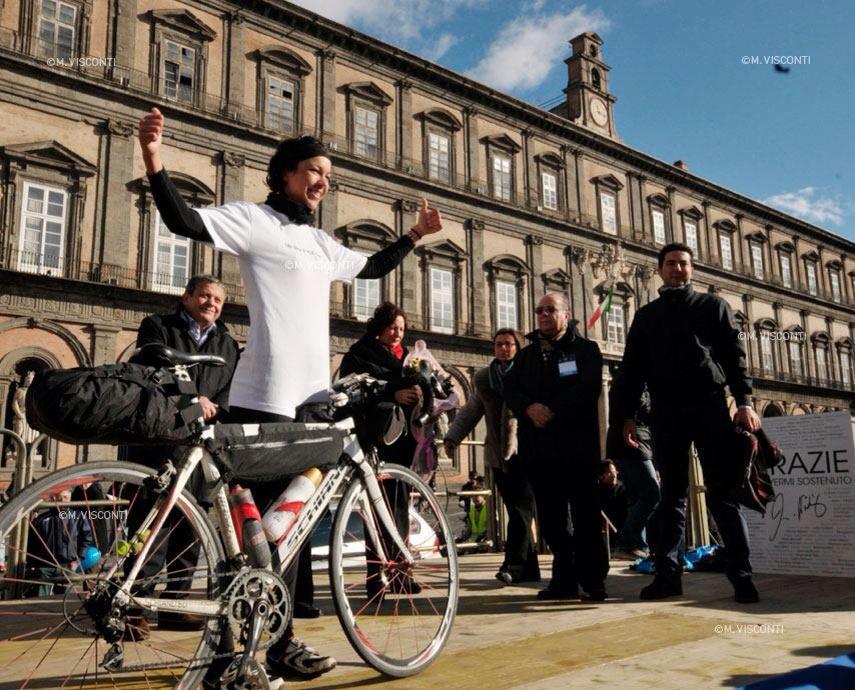 After pedaling more than 18,000 miles around the world in 152 days, becoming the first woman to complete the challenge within the “world record” parameters, Juliana Buhring emerged with this insight: There’s no such thing as the right time to chase a dream.

“From the beginning, everybody told me I was not ready,” she said. “Without a sponsor or money, without a technical and medical support team, with only eight months of training on a bicycle, I was not ready to leave and should delay the entire endeavor for at least another year. I got a lot of laughs in the early days. Nobody believed I would make it, certainly not all the way around the world, averaging 200 kilometers per day without rest. I was not an athlete and not a cyclist. In fact, there was nothing to qualify me for such a huge undertaking. Nothing but the willpower and determination to finish no matter what. I was out to test everything is possible. That we can do things greater than ourselves.”

The 32-year-old Italian teacher set out from Naples, Italy, on July 23, 2012. With less than a year of training, a basic road bike she called Pegasus, minimal gear, no backers, and little money, Buhring’s aim from the beginning was to set a round-the-world record, defined by Guinness Book of World Records as a trip that equals the circumference of the Earth — 24,900 miles — in one direction, with no fewer than 18,000 of those miles pedaled. The overall record under these rules is 127 days, held by Alan Bate, who completed the journey in August 2010. No woman has claimed the challenge under these parameters. Buhring planned to average 120 miles a day. Unsurprisingly, few took Buhring seriously in the beginning.

“From the get-go, there were problems,” she said. “My shifter broke and I cycled two weeks in either the highest or lowest gear. My iPhone fell and the screen smashed. The first month involved a lot of adjusting to just being on the road, ironing out all the kinks and problems that are impossible to predict.”

On top of shifter problems, Buhring reported 29 flat tires, six broken spokes, a broken pedal, a throat infection in India, magpie attacks in Australia, and four serious falls. Headwinds bogged her down for an estimated 70 percent of the journey, and she nearly froze on top of a high pass in New Zealand before a couple in a camper van took her in. She pedaled through 18 countries, up and over six mountain ranges, and across four continents before pedaling through a snowstorm to finish in Naples on December 22.

“More often than not, I wondered whether I had what it took to see this endeavor through to the end,” she said. “I guess I have my answer. And I guess I’ve proved my point — we can do things that are greater than ourselves. You do not need to be rich, famous, talented, or anybody at all to do something extraordinary. The sky is not the limit. There are no limits — only social, cultural, religious and self-imposed limitations. If we can break through those, I believe humans are capable of going much further both as individuals and as a species.”