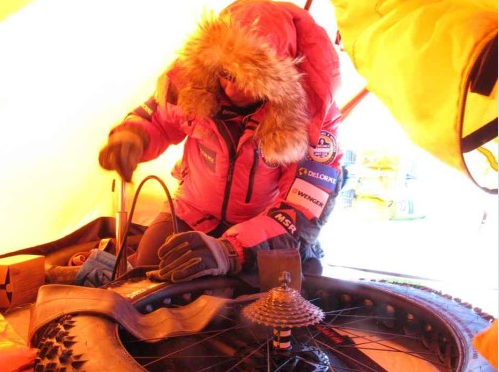 Eric Larsen repairs a flat tire in his tent shortly after making the decision to turn around on his bike expedition to the South Pole.

While we were away on holiday break here at Half Past Done, Antarctic cyclist Eric Larsen decided to halt his ride toward the South Pole and turn around to pedal back to the coast. He was ten days into his expedition when he made the decision to abort, citing slowing progress and the mathematical likelihood that he would run out of food and supplies before he reached the pole.

“As I started to calculate my mileage south of 85 degrees, I realized that due to an increased amount of climbing, headwinds, and consequently sastrugi and drifts, my daily mileage would realistically be closer to 10 nautical miles per day,” he reported. “At that rate, my chances of making the pole before my food ran out (as well as the end of the season) would be zero — odds that would basically mean a costly extraction somewhere before the pole.”

Larsen had been pedaling somewhere in the range of twenty miles a day since he left Hercules Inlet on December 21. He reported the weather was relatively “good” in the early days of the expedition, and he had been able to follow an old CAT trail that offered a relatively stable surface of packed snow. But his progress continued to slow as drifting snow filled in the track and wind “picked up substantially.” After several days of frustrating battles with the conditions, Larsen conceded that he had fallen too far behind schedule.

The end of Larsen’s expedition leaves open the question of whether it’s even possible, let alone practical, to use a bicycle for a self-supported Antarctic expedition. Heavy wind and drifting snow are the only two weather conditions that are all but guaranteed on the continent. Frigid air from the pole slides down the gently sloping ice sheet toward the warmer coast, resulting in a near-constant headwind for anyone traveling south. The wind also forms challenging surface conditions — grains of dry snow are tossed for miles, until they are rounded into perfect spheres, impossible to adhere or “pack” on the surface crust. When these sand-like grains of snow catch on something, they tend to gather until they form sastrugi, or odd-shaped snow formations that range from ripples to large boulder-like obstacles. The combination of a soft, uneven surface and the halting wind was enough to slow Larsen’s average speed to two miles per hour or less, even when pedaling. Of course this kind of progress begs the question — “if riding a bike is consistently slower and harder than walking, why use a bike?”

“Of all the things that I planned and prepared to get ready for Cycle South, I didn’t give much extra thought to the wind,” Larsen wrote. “And it’s not that I didn’t know that Antarctica isn’t windy either, I’ve skied over 2,000 miles into the wind here on several expeditions. Ultimately, I was surprised at the debilitating effect of the wind on me and my snow bike as well as the surface conditions.”

Larsen is currently making his way back toward the Hercules Inlet. Despite what is now a tailwind, he reported that pedaling is still difficult due to drifting snow. Back at home, his crew is mulling what could be done differently to increase the chance of success in a future expedition. Dropping weight on the bike is one solution — Larsen estimated his bike weighed more than a hundred pounds at the onset of the expedition. But as it stands, Larsen attempted to cut weight anywhere he could, and set a schedule that could be considered overly ambitious. The current ski record from Hercules Inlet to the South Pole stands at 24 days, and Larsen planned supplies with the hope that he could pedal to the pole in 22 days or less. Ski expeditions typically take more than 40 days. Realistically, the amount of supplies needed to support a five-week expedition would far exceed a hundred pounds.

“The bike itself is doing pretty well, but the wind was a huge factor on a bike that weighed that much,” said Tim Harincar, Larsen’s technology advisor. “So the question kind of becomes how to cut the weight and wind resistance down so that the team can make more miles with less energy. Adding team members is a possibility — but with that you add fuel, food and more gear, so adding another person doesn’t split the weight, but rather you might see a gain of only 25 percent — not to mention you also have just doubled of the overall cost of the expedition. A third person might see some additional benefit, but after that you get diminishing returns fast. Changing the profile would also help, but the question is how and it what form. Sleds probably will never work because of friction, but a trailer with a ski or wheel might. But either changes bike handling a lot and adds dead weight.”

Since heavy weight and headwinds are the nemesis of efficient travel by wheels, Antarctic bike travel is a complicated puzzle. Soft and uneven snow conditions add another layer of difficulty, but perhaps not the most problematic layer. The answer of how to ride a bicycle to the South Pole may not lie in simply finding a fatter tire or sleeker profile for the bike. There may not be an answer. But Larsen has gotten farther in a solo Antarctic bike expedition than anyone has in ten years, and it will be interesting, in the coming weeks, to hear his thoughts about future possibilities.