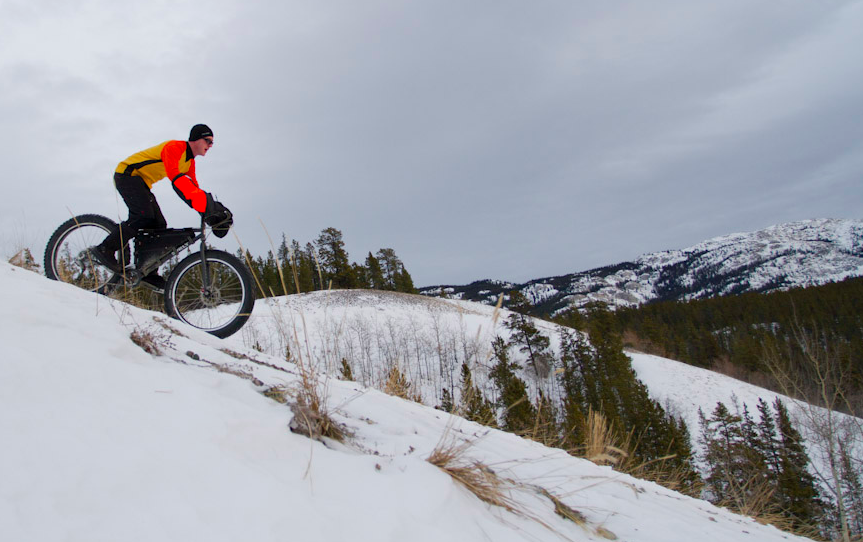 Mario Villeneuve participates in the 2011 5+ Hours of Light Fat Tire Festival in Whitehorse, Yukon, in December 2011. Photo by Tim Hogan

Dustin Rainey pops a backward wheelie during the 2011 5+ Hours of Light. Photo from Jenn Roberts.

It’s the Land of the Midnight Sun, so it makes sense that Whitehorse, Yukon, is home to the only 24-hour mountain bike race where headlights are not only unnecessary, they’re forbidden. But where there is abundant daylight in the summer, there’s an equally extreme dearth in the winter. The dry singletrack and warm evenings of the summer solstice are replaced with snow and bone-chilling cold, but the intrepid mountain bikers of the Yukon are still out there, pedaling laps through the trees beneath the low winter sun.

In celebration of the winter solstice, the members of Whitehorse’s Contagious Mountain Bike Club put together a sister event to the 24 Hours of Light Mountain Bike Festival. The second annual 5+ Hours of Light Fat Tire Festival, planned for January 12, has riders competing to see how many laps they can ride a fat bike around a 6.5-kilometer, snow-covered course from sunrise to sunset, exactly 5 hours and 37 minutes. The event is structured similar to the 24 Hours of Light, with the same single rule — no artificial lights. 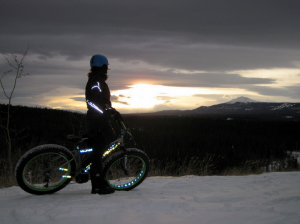 Sierra Van de Meer pauses in the “high noon” sun during the 2011 5+ Hours of Light. Photo from Jenn Roberts.

Mario Villeneuve, one of the event’s co-coordinators, said the race began as a joke. “We were meeting with the (Contagious Mountain Bike Club) and we were saying how we have a race for the longest day of the year so we should do something for the shortest day.”

Twenty-six riders participated in the first annual event on December 18, 2011, where warmer temperatures and soft snow made for challenging riding conditions, and wind gusted as high as 65 kilometers per hour. Local rider Jonah Clark won the event with seven laps for a total of 46 kilometres, and Sierra van der Meer led all female riders with three laps. The four-person team “Pearsons and a Girl” led their field with seven laps.

Fat bikes are lined up at the start of the 2011 5+ Hours of Light. Photo from Jenn Roberts.

This year’s event was postponed to January because a cold snap during the winter solstice plunged temperatures below minus 30 Celcius, which co-coordinator Sierra Van der Meer said was well below the margin for the intended fun factor of the event. Partly cloudy skies and temperatures near -12C (11F) are expected for Saturday’s event.

More information about the Contagious Mountain Bike Club is available at http://cmbcyukon.ca.