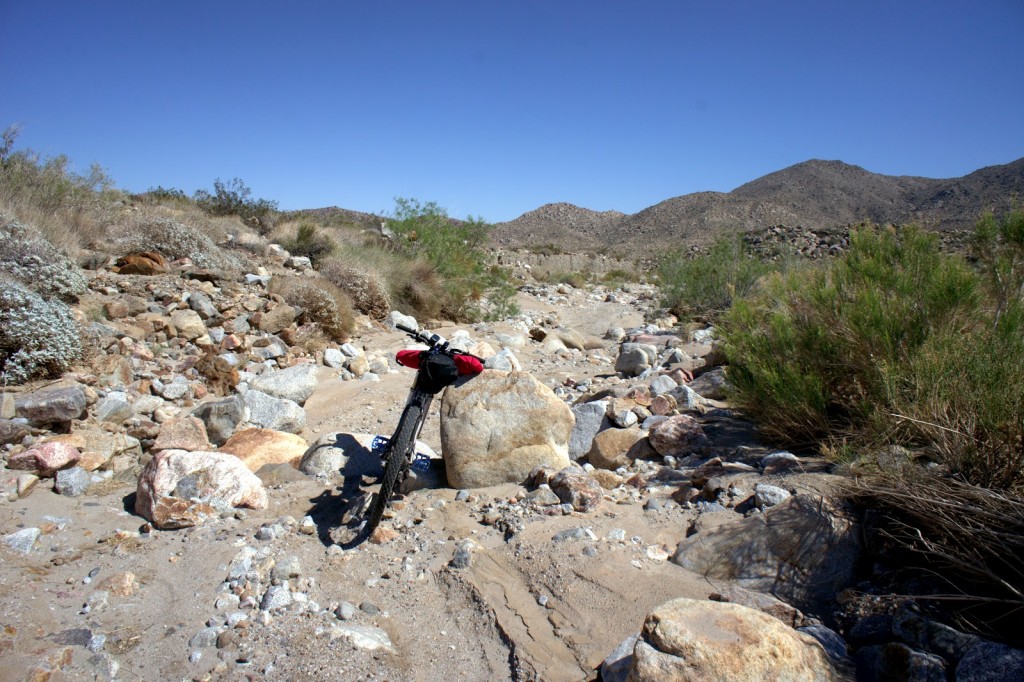 Desert wash riding in Coyote Canyon during the 2012 Stagecoach 400. Photo by Jill Homer

Driven toward the gold fields of California, miners, adventurers, and fortune seekers blazed a path across the scorched earth of the Anza-Borrego desert, a route now known as the Great Overland Stage Route of 1849. Along parts of this route, little has changed in 164 years. The soft desert sand, rocks, ruts, and cacti that plagued wagon wheels and horse hooves remain to challenge a modern version of adventure seekers — mountain bikers.

The Stagecoach 400 bikepacking race, a loop through Southern California that loosely follows the historic Great Overland Stage Route and others, is set to begin at 9 a.m. April 26 in Idyllwild, California. This is the second year for the event, which hosted more than fifty participants in 2012.

A cool oasis in the Anza-Borrego Desert. Photo by Jill Homer.

Brendan and Mary Collier of Idyllwild, California, designed the route to “highlight Southern California’s geographic and cultural diversity.” The approximately 400-mile route descends the alpine slopes of the San Jacinto Mountains and plunges into the sandy washes of the Anza-Borrego desert. A rugged climb over the Laguna Mountains takes riders into the heart of downtown San Diego and along the Pacific Coast, where they’ll wind through urban singletrack before venturing back into remote desert canyons and native villages that seem almost lost in time. The Stagecoach 400 loop has approximately 32,000 feet of climbing.

“The route illustrates our area’s unique proximity to mountains, desert, and ocean … and likewise stands out among peer events for it’s challenges,” the Colliers stated on the event’s Web site.

They warn prospective riders to not underestimate the difficulties of the route despite its sometimes urban setting. The Stagecoach 400 is a self-supported race, and riders are expected to adhere to the ethos and independence of an unsupported bikepacking event.

“Participants will be required to carry overnight gear and other items to safely and successfully complete the route,” the said. “The commitment level is very high despite going near several population areas. Food and water will be hard to come by for long sections.”

The Colliers made a few changes to the course since the inaugural event. The initial trail out of Idyllwild has been rerouted to avoid private property, and a hike-a-bike outside of Alpine has been removed, among a few other changes. 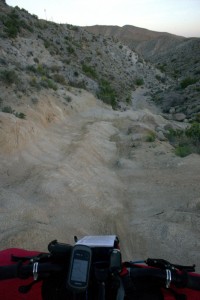 The Colliers offer this route description: “Starting in Idyllwild, we will ride through the San Jacintos to Borrego Springs by way of Coyote Canyon, geographically diverse and a historic part of the Juan Bautista de Anza expeditions. The riding here will vary from jeep road to cross country. We’ll ride sand washes through the Anza Borrego desert, up rugged doubltrack into the Lagunas, through the mountains on singletrack and west to the San Diego Bay on doubletrack, singletrack, and paved bike paths. The route brings us north along the Pacific Ocean and turns inland at Torrey Pines State Beach. From there we’ll ride singletrack through Penasquitos Canyon, Black Mountain Open Space, Lake Hodges, and the San Pasqual Valley Trail, entirely on singletrack. The route climbs high back into the mountains through Pamo Valley, Black Canyon, and Lost Valley on long stretches of doubletrack before bringing us back home on the California Riding and Hiking Trail.”

The route is unmarked and while the Stagecoach 400 organizers provide cues, Brendan Collier said that “GPS navigation devices are strongly recommended.” Eszter Horanyi, the women’s winner of the 2012 event, added, “It should come with the addendum of: “You will be completely lost without a GPS because Brendan likes to send the route through the strangest of little places, many places that the rational brain simply will not comprehend. Just bring it.”

More information and a sign-up sheet are available at http://socalenduro.wordpress.com/stagecoach-400. The event has no cost, but the organizers suggest s $20 donation to the Idyllwild Community Fund.

3 thoughts on “Mark your calendar: Stagecoach 400”