The round-trip, solo, unsupported journey from land to the North Pole and back has been described as “the last great challenge left to man” — one of the few large expeditions on Earth that has yet to be completed. The reason for this is that many consider the route impossible for a person to complete alone without any outside support. The distance is more than 2,000 miles, and at the pace of a typical polar skier, requires a timeframe that outlasts the Arctic season, while hoisting months’ worth of gear and supplies. Anyone attempting this journey would have to start in the cold and complete darkness of the Arctic winter, and from day one would be locked in a race against the deteriorating ice conditions of the coming Arctic summer.

It would be a foolhardy attempt for even the most experienced polar explorers. But British ultrarunner Tim Williamson reasoned that such a long and arduous trek wasn’t necessarily the realm of a seasoned explorer. Success, he said, would require the quickness and agility of an endurance athlete.

“The majority fail because they aren’t built for walking long distances,” Williamson said of prior attempts. “This is the thing I’m especially built for. The North Pole holds a great amount of wonder to me, and as an ultrarunner, it is the ultimate challenge.” 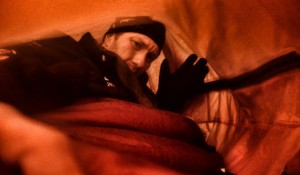 Tim Williamson inside his bivy sack during a storm while training in Iceland.

The 25-year-old had planned to set out on January 13 from Resolute Bay in northern Canada and walk, without skis, at least 2,200 miles in a journey that would take between 100 and 120 days. Williamson has since decided to postpone his trip because the record high temperatures of summer 2012 left the Arctic Ocean with dangerous ice conditions that will likely prevent any successful expeditions to the North Pole this year. Several Arctic expedition groups told Williamson that rough and broken ice would make his trek difficult from the start, with zero chance of success.

Williamson and his backers from the British adventure organization Chillisauce decided to delay the attempt indefinitely, but insisted it will still happen when Arctic ice conditions allow. In the meantime, Williamson decided to use his four-month break from his job at Newcastle University to travel to Keflavik, Iceland, where he planned to train to condition himself for prolonged isolation, sustained cold, and navigating in barren, featureless landscapes. He also hoped to push for a record for a solo, unsupported trek on foot.

“The purpose of this trip is to get a sense of the isolation and test some bits of kit,” he said of his Iceland training expedition. “I’ll be over the moon if I manage 1,000 miles since I’m carrying everything in a backpack.”

Whether they’re justified or not, Williamson’s ambitions represent another crossover in the blurring line between expedition travel and endurance sports. When it comes to long-distance expeditions such as crossing oceans or continents, the conceivable journeys that remain uncompleted stay that way because of their perceived or real physical impossibility. Williamson’s North Pole plan required an average pace of 22 miles a day, dragging what would likely be hundreds of pounds of supplies at the start, through the notoriously difficult obstacles of the Arctic icecap. For more than a hundred days, he’d face complete isolation and constant danger from polar bears, storms, and open water. And where polar explorers throughout modern history have deemed this journey impossible, all it took was a 25-year-old English ultrarunner with barely more than two years of running experience to find the motivation and financial backing to set his plan in motion. 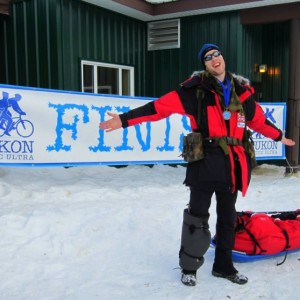 Tim Williamson at the finish line of the 2012 Yukon Arctic Ultra, a 300-mile winter trail race.

Williamson first conceived a North Pole expedition shortly after finishing the Yukon Arctic Ultra 300-mile race in February 2012. “I was lying in my sleeping bag on the hard floor of the storage room trying to get to sleep,” he said. “Out in the main hall I could hear the media guys talking to each other about the dog sled teams and how fast they travelled. Listening to this, I asked myself whether a human being could outrun a dog sled team. I knew the North Pole Speed Record had been made with dogs. Right there and then I told myself I would try and break that record.”

The North Pole speed record, set in 2005 by a dogsled team led by Tom Avery, is just shy of 37 days. The ski record was 41 and a half days. Both of these expeditions had been resupplied team efforts, and one-way, with a total distance of about 500 miles. Experienced polar skiers such as British adventurer Ben Saunders have attempted the route unsupported, but so far haven’t been successful. It had just taken Williamson 7 days and 5 hours to race 300 miles on the established path of the Dawson Trail, and he finished the race with a stress fracture. But from this experience, he determined that not only could he take on a challenge that had stymied explorers for decades, but constructed his journey to be as long as arduous as possible. He wanted take a polar expedition “farther, faster, and greener than it has ever gone before.”

As it turned out, these weren’t just the feverous dreams of a post-endurance race mental fog. Williamson set out to make his plan a reality, and continues to insist that the completion of his trek “isn’t a matter of if, but when.”

“This challenge requires a lot of radical thinking,” he admitted. Many critics weighed in, pointing out that all it required was a lot of hubris, and Williamson was in for a rude awakening.

Time will tell whether Williamson can ever get his expedition off the ground, or whether funding, motivation, and the unfortunate changes in ice conditions caused by a warming Arctic climate may forever keep such an ambitious journey solidly lodged in the pipe-dream category. Not much information has been posted about his current Iceland expedition yet, but recent tweets from his Twitter account indicate that he is receiving the harsh education he hoped for:

“I’m trying to break the 1,000 barrier for a solo unassisted trek. I must be mad for doing this!”

“Soaked and tired, I trudge into Reykjavik a day behind schedule. Skinned my ankle when my leg fell thru a fissure hidden by snow.” 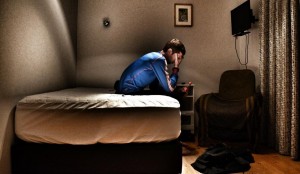 From Tim Williamson’s Twitter page, with the caption, “Heartbreaking; in a hotel room after giving it everything I had.”

“The wind has increased to storm force. I’m being knocked around in my bivvy.”

“The rocks and ice tore thru 3 layers of clothing.”

“I was having a bad time since my stove failed on day 4, forcing me to eat snow for water.”

“The expedition is over. I went down, ice axe swinging, in 75mph hailstorm at Kistufell. I’m now back on home turf.”