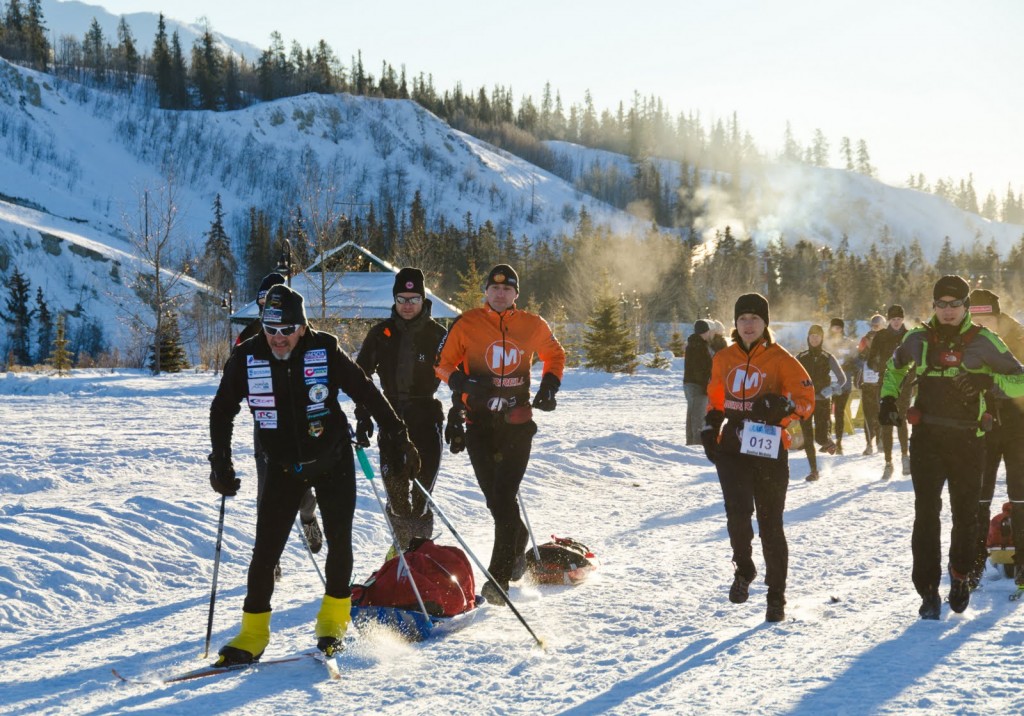 Competitors in the 2011 Yukon Arctic Ultra.

Beneath gray skies and a swirl of snow flurries, roughly sixty runners, skiers, and cyclists embarked on an ultra-distance race along a route regarded for its rough conditions and extreme weather. The Yukon Arctic Ultra in Yukon, Canada, is touted as “the world’s coldest ultra,” although the 2013 event brought mild temperatures and light snow that left competitors fretting more about soft and difficult trail conditions than cold.

The Yukon Arctic Ultra began Sunday morning, one day after the more well-known Yukon Quest sled dog race. Both follow the Dawson Overland Trail. Once a well-traveled trade route during the Klondike Gold Rush era, the winter trail contours the bluffs and channels of the Yukon River between Whitehorse and Dawson City, Yukon. The cold in this subarctic Interior valley can be extreme, sometimes reaching 60 below zero, but this weekend saw unseasonably mild temperatures in the 20s and light snow.

The race progress indicates soft and slow trail conditions. After 24 hours of racing, no one had yet reached the hundred-mile finish/checkpoint in Braeburn. Italian Enrico Ghidoni, who is competing in the 430-mile event on cross-country skis, was leading the pack about 25 miles outside Braeburn. Close behind were 100-mile foot racers Verena Koenig and Laura Sly, both Whitehorse locals. Italian cyclist Aldo Mazzocchi, the sole 430-mile bike competitor, was in fourth position. There is only one American competing in the ultra-distance events, 300-mile foot racer Jason Carpenter of San Diego. He was in 29th position as of the 24-hour mark.

Tracking for the 2013 Yukon Arctic Ultra is available at http://trackleaders.com/yukonultra13.