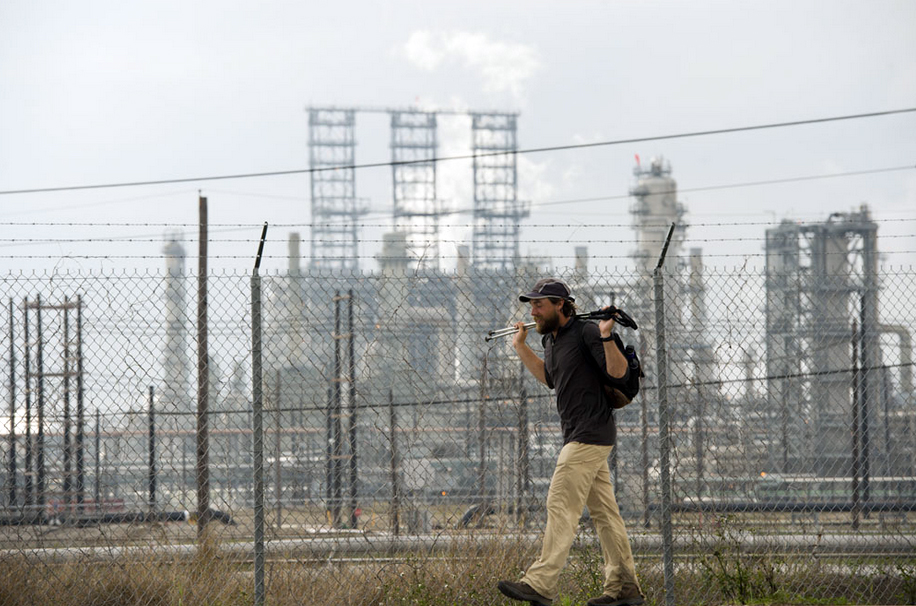 Ken Ilgunas passes a Texas oil refinery on the final leg of his walk along the length of the proposed Keystone XL Pipeline project. Photo by Woody Welch

“To get to the heart of America, we cannot simply walk its forests and fields; rather, we must cut through its industrial underbelly and pull out and examine its ugly organs: its railways and refineries, its coal plants and pipelines. Its guts.”

Late last week, Ken Ilgunas reached the end of his 1,700-mile hike across North America’s heartland, dipping his toes in the Sabine-Neches waterway near Port Arthur, Texas. The final leg of his trek was the antithesis of a typical through-hiker’s destination — a sprawl of chain store districts and oil refineries patrolled by suspicious police officers and a driver who interrogated him about attempting to jump off a bridge. Chemicals in the air made his tongue tingle as smokestacks spewed yellow smog into a colorless sky.

“I was in Mordor, on the last leg of my journey, heading toward the summit of Mount Doom: The Valero Refinery, with its billowing smokestacks and spouting towers of fire, where the XL oil would be refined and shipped off to foreign markets,” he wrote. 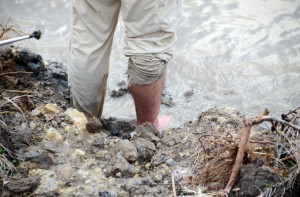 Ilgunas began his hike 136 days earlier in Northern Alberta, and hiked through the winter along the proposed path of the Keystone XL oil pipeline, a controversial project that Ilgunas believes will have grave environmental and cultural implications. He fashioned his hike as an awareness-raising venture to call attention to the pipeline proposal, as well as a personal exploration of an often overlooked segment of North America — the “fly-over states.”

His walk across the prairie began with the usual challenges of a body adjusting to the rigors of constant movement — blisters, muscle soreness, shin splints, crushing fatigue. As winter set in, he dealt with ice storms, gale-force winds and nights in subzero cold. Soon the challenges became more unique to his brand of Midwestern adventure — suspicious landowners, run-ins with law enforcement, aggressive herds of cattle, and as he moved south, increasing presence of bewildering poverty. But he also found ongoing examples of human kindness that impressed him more than all of the trials of his nonexistent trail.

“Each time I had imagined the end, I’d come close to tears thinking about all the people I’d met,” he wrote. … “I would feel this deep sorrowful love for my fellow man, and this anachronistic, but very real, pride for being North American. I’d think about how I came on this journey to learn about pipelines, but how I would learn more about the goodness of mankind.”

Ilgunas’s prairie walk provides insight into the path of modern adventure. In a world where most geographical discoveries have been achieved and scientific discoveries take place on increasingly microscopic scales, the best insight the modern explorer can provide is personal and cultural discovery. Ilgunas went for a long walk across a part of North America that many have written off as uninteresting or unimportant, and brought it to life with photographs of sweeping skies and open space, as well as poetic musings about “the long grainy tails of your green grass waving against my legs, the cloud mountains, moving mountain chains, sailing across the deep blue sky, the chatter of coyotes, the groans of cattle, the stars, oh the stars.” Soon, his growing number of readers shared his insights about the plight of the prairie and the potential environmental devastation of the Tar Sands of Alberta or the Keystone XL Pipeline.

“What we ultimately need, it seems, is what no pipeline can bring because it’s already here,” he wrote. “Walk across America, and view the paths that were once been blazed by hand tool, the wilderness tamed by pluck, the tree roots yanked out by grit, and see, within us all, the deep reservoirs of goodness, the wellsprings of love, and you can’t help but believe that — with our nimble hands, inventive minds, compassionate souls, and a good pair of feet — we can go far.”

To read more about Ilgunas’s journey, visit his blog at http://www.kenilgunas.com.