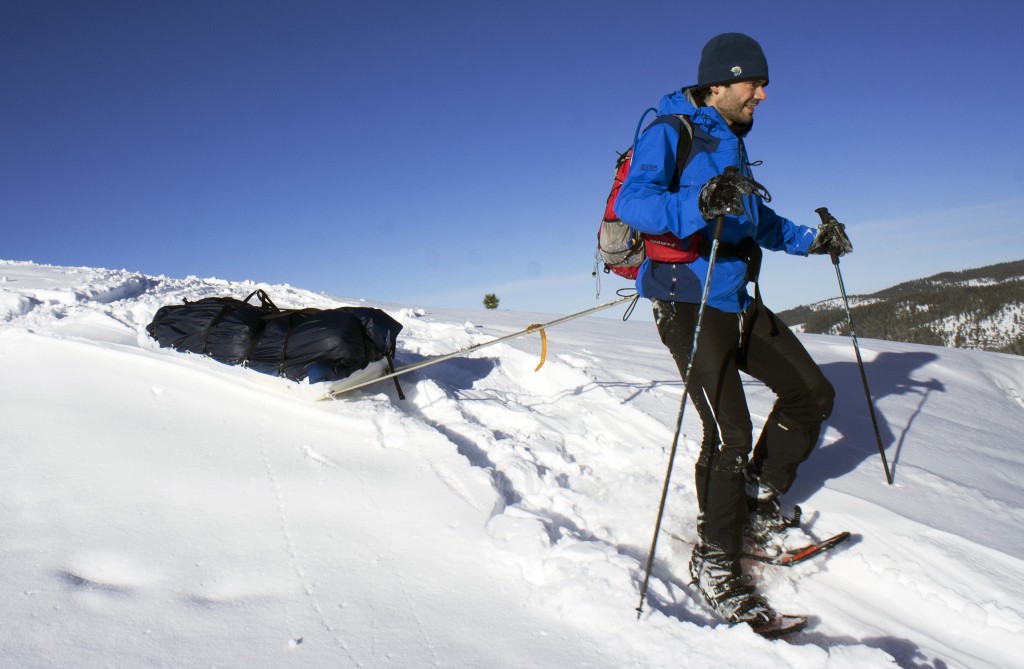 Editor’s note: Beat Jegerlehner is preparing to compete in the Iditarod Trail Invitational, a thousand-mile, human-powered trek across frozen Alaska on the famed Iditarod Trail. The race begins Feb. 24 in Knik, Alaska, and Beat will be competing on foot. This post is the second in a series covering his preparation and participation in the race. View the first post here.

When Beat Jegerlehner goes for training runs on the Glacier Point ski trail in Yosemite National Park, he often gets inquisitive looks and comments from other trail users. Because while others glide down the trail on skis with lightweight backpacks, Beat is marching along the rough edge while dragging a six-foot sled loaded with what looks like, as he calls it, “a dead body builder.” 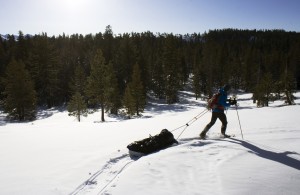 The long sled and its many supplies are a necessary component of his thousand-mile trek to Nome, Alaska, which begins Feb. 24. In order to acquire a design that fits his exact needs, he constructed his own sled, pole, and harness system from lightweight materials. The harness is made from nylon webbing attached to a thirty-liter Raidlight backpack. The poles are constructed form hollow aluminum tubbing, and the sled is made from a single sheet of Ultra High Molecular Weight Polyethylene — as Beat calls it “The material of Greek Gods. Thor’s hammer’s handle is made of it.” UHMW Polyethylene is both strong, light, and low friction — allowing for better glide over even rough snow and exposed ground. He added a couple of plastic runners to the bottom for better tracking on smooth surfaces.

The sled is six feet in length to allow him to sleep inside when needed — all he has to do is remove his duffel bag and unroll his sleeping bag bundle for a quick nap. And although it looks bulky enough to hold the remains of a deceased body builder, the components of the sled are much lighter — somewhere in the range of 40 to 45 pounds including food weight. The six-foot length allows him to loosely distribute his gear for easy access without fussing with compression bags.

The following is a list of Beat’s planned gear for survival and athletic performance in temperatures that will likely range from 40 above to 50 below zero, precipitation that can range from rain to ice pellets to white-out blizzards, wind speeds that will top sixty miles and hour, and trail conditions that can range from powder snow to glare ice to exposed dirt and frozen tussocks:

Cooking coffee and breakfast at 15 degrees on top of Sentinel Dome in Yosemite National Park.

What do you think of Beat’s gear list? What would you include or leave behind for a month-long, thousand-mile trek across the frozen Alaskan wilderness?

Joe Grant of Colorado, who is preparing to race the 350-mile distance to McGrath, Alaska, on foot in this year’s race, also posted his own gear list. The link is here.