Overlooking Washoe Valley and Carson City, Nevada, on the route for the California Sierra Trail Race. Photo by Sean Allan.

With multi-day events spread out from February (Iditarod Trail Invitational) to July (Colorado Trail Race), the North American bikepacking season now has another extension in a Labor Day challenge that’s sure to be laborious — the California Sierra Trail Race.

With more than 400 miles of mostly trail and nearly 80,000 feet of climbing along the granite hills and rugged mountains of the Sierras, this new independent, self-supported race promises to test the mettle of even the strongest and most avid mountain bikers. The race begins at 6 a.m. August 31 at Raley’s Shopping Center in Auburn, California. 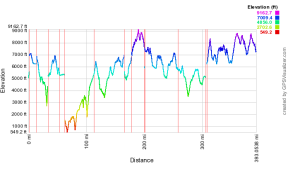 A plug-in of the GPX track to GPSvisualizer.com reveals this rugged elevation profile.

The California Sierra Trail Race begins in the lower foothills of the Sierra Nevada mountains outside Auburn, traversing historic mining trails and routes from the 1850s. It then moves up the west slope of the Sierras to the Rubicon Trail, the original stage route from the foothills to Lake Tahoe. At Tahoe Lake, the route joins the famed Tahoe Rim Trail in a circle around the lake before linking back to mining trails on the return to Auburn. The route mainly utilizes singletrack and dirt trails with some gravel road and short pavement connectors.

Sean Allan of Foresthill, California, pioneered the route and set up the Web site and start date. But he emphasizes that the California Sierra Trail Race is an independent venture and he is not a “race director.” The race’s minimal rules follow the self-supported bikepacking ethos: No outside support, no trail markings, carry what you need from the start or purchase it from commercial sources along the way, and take care of yourself because no one is coming to rescue you. A GPS is necessary equipment for navigation of route. Allan “may or may not” track progress or list finishing times following the race, “but we will absolutely keep track of the experiences and stories of all involved.”

“This is a self-supported race, which means you are in charge of yourself and no one else is allowed to help you during the race,” Allan said. “Take as long as you like. The general consensus is between 410 and 430 miles with around 80,000 feet of elevation gain and loss. If you can bust that out in a couple of days you might want to talk to some Pro-Tour teams about a little race in France in the coming months. I would say a pretty fit person with proper gear, riding sixteen hours a day will be looking at somewhere around five to seven days. A world-class multi-day racer might be looking at three and a half to five days.”

Allan has been plotting a multiday race in the Sierras for several years now, and gathered quite a bit of feedback from the community on the potential route and time of year before setting an official date for the race.

“I let those interested in racing this year pick the date; Labor Day weekend seemed to be the date all who gave input wanted, so I went with it,” Allan said. “There’s not really a ton of difference between late July and late August as far as normal temps go. September is about 5 degrees less, but way less daylight and much colder temps up high. Plus it doesn’t conflict with Colorado Trail Race. While I doubt anyone would do both, there are those who think they can so who am I to say?”

Allan scouted much of the route last summer and posted his report and pictures at this link. More information about the race can be found here.