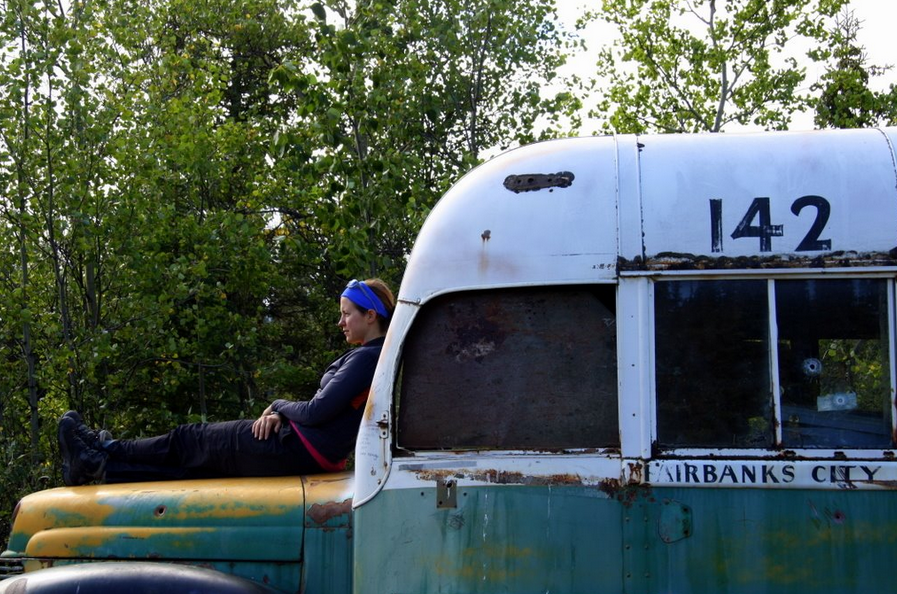 Heather Horton rests on the hood of the “Magic Bus” once occupied by Christopher McCandless near Healy, Alaska. Photo by Ed Plumb

Earlier this week, a man’s 27-year escape into the solitude of the Maine woods came to an end when police arrested 47-year-old Christopher Knight after he tripped a surveillance sensor while burglarizing private property. Knight — who resided in the same campsite, stayed warm during the winter by wrapping himself in sleeping bags, and utilized local cabins and camps to steal food and supplies — had evaded capture and avoided human contact for nearly three decades.

Now that he’s in public custody, the lore of the “North Pond Hermit” is spreading across the world. As with most outliers in society, public opinion came down hard on Knight, with the labels “severe mental illness,” “sociopath” and “thief” being tossed around by those who can’t imagine why anyone would shun human relationships and live without basic modern comforts. But there are others who sympathize with a man who may have simply wanted to live off the grid, far away from what many perceive as a sick and destructive society, and used the means he had to go about doing that — successfully, one might add — for his entire adult life until now.

“For me, hermits, tramps and assorted train-hoppers are a source of hope,” Guardian columnist Jessica Reed wrote. “They remind me that no matter how caught up we might be in the rat race, there is always a way out. If towering buildings, fumes and overcrowded buses become too overwhelming, those freedom seekers remind us that we can make the choice to just opt out and hit the road.” 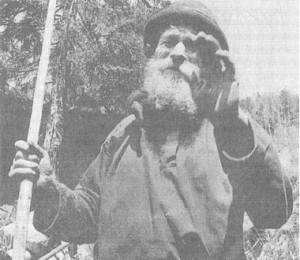 Karp Lykov, in a photo taken shortly after his “capture” in Siberia.

In 1978, Russian authorities uprooted a family who cut themselves off from the outside world for nearly forty years in Siberia. At the base of a mountain that was 150 miles from the nearest settlement, in a spot that had never been explored, four geologists spotted wood stove smoke billowing through the taiga forest while they flew over in a helicopter. After they landed to investigate, they encountered a “very old man” and his family of five — including two adult children who had never seen another human outside their own family.

The “very old man” was Karp Lykov, a devout Old Believer who escaped into the woods with his family after the atheist Bolsheviks took power in Russia in the 1930s. With only meager possessions and some seeds, Lykov, his wife, and then two young children traveled deep into the taiga and erected a crude dwelling from forest materials. Two more children were born in the wild, and for decades the family wrung out a living from the forest, battling harsh winters and the threat of starvation without any intervention from the outside world.

The family depended solely on their own resources. As the things they brought into the forest with them began to wear out, they were replaced with makeshift creations. The adults fashioned birch-bark galoshes in place of shoes. Clothes were patched until they fell apart, then replaced with hemp cloth from ground seed. Although they were industrious and had occasional abundance from berries and meat they gathered on the taiga, the Lykovs lived constantly on the edge of famine. In 1961, the mother, Akulina, died of starvation. But Karp chose to continue raising his children amid the hardship rather than return to the culture that forbade their religious beliefs. The family’s eventual discovery sparked a similar public fascination, because the Lykovs were a rarity even during the last century — a modern family who successfully managed to cut all ties from society. 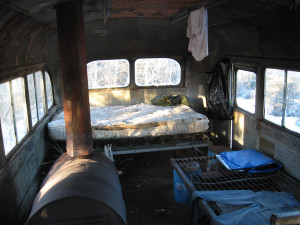 The interior of the “Magic Bus” where Chris McCandless lived for four months before dying of starvation on the edge of civilization in Alaska. Photo by Ed Plumb.

In current times, people who seek this extremely unconventional lifestyle are met with equally extreme reactions — from deep admiration to suspicion to unveiled hatred. A well-known example is Christopher McCandless, whose self-styled hermit life and subsequent death in the Alaskan wilderness was documented in the book and movie “Into the Wild.” In April 1992, McCandless disappeared into the woods outside Denali National Park with few provisions and even less experience, and eked out a living on the land until succumbing to starvation in August.

McCandless gained national notoriety after John Krakauer’s book was released in 1996. Some people admired McCandless’s bold idealism and willingness to put it all on the line to sustain his perceived journey toward a “true life.” But many more reviled him, questioning his intelligence and criticizing his lack of resourcefulness and clear amateurism. 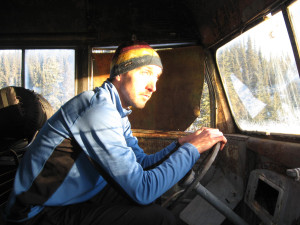 Ed Plumb at the helm of the abandoned “magic bus,” which remains in the same spot where McCandless found it two decades ago.

Ed Plumb, a Fairbanks, Alaska, resident with a long resume of wilderness and backcountry experience, said he read the initial newspaper reports of McCandless’s death and had the same reaction as most other Alaskans — “another careless person went out into the wilderness unprepared and suffered the consequences.” Krakauer’s book put a human face onto the story, but Plumb still didn’t understand why people would revere McCandless as a prodigy or hero of sorts. Still, the tale captured Plumb’s imagination. He and some friends made at least two subsequent trips onto the Stampede Trail to visit the “magic bus” that McCandless made his home for four months before he died.

“I very much admire his sense of adventure and I can relate to his desire to remove oneself from the pressures and expectations of society — and live simply in the wild where the chores of survival become daily routine,” Plumb wrote about one trip. “I am intrigued and inspired by the powerfulness of the wilderness and I understand the allure this has for others making their way north to see the bus and wilderness that McCandless found so special.”

McCandless himself wrote in a letter to his friend Ron Franz, “So many people live within unhappy circumstances and yet will not take the initiative to change their situation because they are conditioned to a life of security, conformity, and conservatism, all of which may appear to give one peace of mind, but in reality nothing is more dangerous to the adventurous spirit within a man than a secure future. The very basic core of a man’s living spirit is his passion for adventure. The joy of life comes from our encounters with new experiences, and hence there is no greater joy than to have an endlessly changing horizon, for each day to have a new and different sun.”

Although “adventure” and “escape” are clearly two different things, this core desire does perpetuate fascination with those few people who find a way to subsist “in the wild.” Even though Knight is an admitted —but as yet unconvicted — “thief,” there are plenty of people who wish he’d never been caught. Why did we have to go looking for Knight? Surely the resources our society spent hunting this man could have fed many people for decades, and at the very least paid back the people he robbed many times over. And now the world has one less “hermit” as an example that it is indeed possible to escape the shackles of civilization. But he did take things that did not belong to him. And he wouldn’t have survived otherwise. Still, what can be said about the others? Why do they spark a strong reaction from us?

A few years ago, while I was living in Alaska, I revisited McCandless’s story and concluded, “Extreme actions tend to evoke extreme reactions. Chris McCandless has a volatile place in American history because his simple but stark story causes us, whether consciously or subconsciously, to ask some unsettling questions of ourselves. His extreme convictions cause us to question our own faith. His extreme passion causes us to ask where our own passion lies. His extreme solitude causes us to take stock of our own relationships. His extreme death causes us to consider our own mortality. I think Chris angers us not because he failed in his quest to live what was, at least in his mind, a true existence. It’s because he succeeded.”