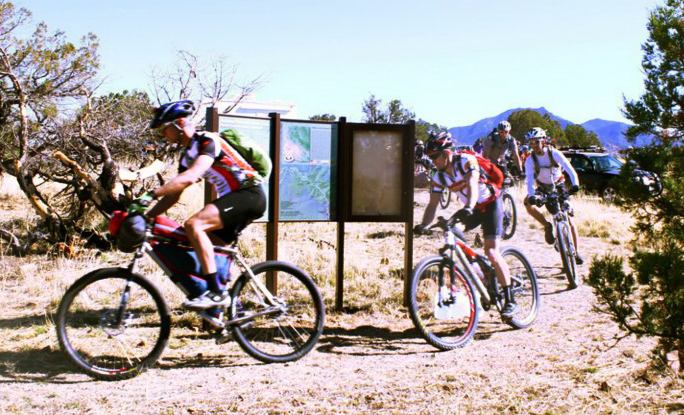 Aaron Gulley and others take off at the start of the 300-mile Arizona Trail Race on Friday morning. Photo by Scott Morris

Aaron Gulley, a journalist from Santa Fe, New Mexico, appears to have finished the 300-mile Arizona Trail mountain bike race under the current record of 2 days, 5 hours, and 10 minutes. According to the race tracker, Gulley arrived at the finish around 1 p.m. Sunday, which would have shaved about an hour off the old record. Race organizer Scott Morris was still awaiting a call-in from Gulley to register an official finish time.

Close behind Gulley are Alaska rider Pete Basinger and Eszter Horanyi of Colorado, who is well on pace to break the women’s record of 3 days, 4 hours. Aaron Boatman leads the 750-mile race and is fourth overall.

Although the front runners appear to be having nearly flawless races, this year’s Arizona Trail Race has not been without its trials. At the start of the event, 51 racers were being tracked online. So far six people have officially bailed, citing stomach issues, sidewall tears, crashes, and dehydration. On the first day, Sean Allan of Foresthill, California, did a barrel roll into a prickly bear cactus and endured quite a few needle punctures, including some that were broken off and inches deep in his skin. In order to avoid an infection, he bailed on Highway 83 and went to the hospital. AZT 750-mile racer Justin Simoni received aid from a passing border patrol officer after stomach issues caused serious dehydration. He is also out of the race now.

One thought on “Gulley blazes possible new record on AZT”