After finishing up a “monster hike-a-bike,” Scott Jones presents the “easy” button he’d been carrying for the occasion. Photo by John Schilling.

The stories that have emerged from this year’s Arizona Trail Race are gruesome and beautiful, often at the same time — a man using pliers to pry cholla balls out of his wife’s thighs; doctors surgically removing more than 50 needles from another man’s backside; shoes torn to shreds on a rugged hike-a-bike atop Oracle Ridge; Gila monster sightings; giant insects and creepy cacti; rippling mountain ridges and sunsets that drench the sky in blood light. If the reports serve as any indication, a grand adventure was had by all.

And a number of impressive performances emerged in this year’s race. Of the fifty or so riders who started the 300-mile race, 22 have officially finished with a few more still coming in. At least seven have gone on to challenge the 750-mile full distance of the trail, with Tucson rider Max Morris leading the charge. Aaron Gulley took an hour off the men’s record in 2:03:59; Eszter Horanyi shaved 15 hours off the former women’s record in 2:13:15, and was third overall. Pete Basinger arrived an hour ahead of Eszter for second place in 2:12:18. Aaron Boatman (2:17:31) and Dave Wilson (2:21:23) rounded out the top five.

“Aaron Gulley put to rest his AZT demons (he had multiple DNFs prior to this year) and came out over an hour ahead of record pace,” said Scott Morris, who has organized the Arizona Trail Race each April since 2006. “His persistence over the years is inspirational to see.”

“On the women’s side, Eszter Horanyi put in a near perfect race. She slept minimally, made no mistakes, and rode steady throughout.  This led her to take an astonishing 15 hours off the record.  I’ve never seen a rookie execute such a flawless race before. Second place finisher Pete Basinger admitted to hiding his lights when he saw Eszter’s in the distance behind him, fearing she would ‘catch and bury’ him. She finished less than an hour behind Pete.”

“Of course the 750 is still going on, with Max Morris in the lead. He looks to be on pace to finish in nine or less days, leading to a swift start to his Triple Crown. Aaron Boatman was ahead of Max, but dropped in Apache Junction.”

Morris said the weather during the first five days of the race was average for April, which is generally favorable for going fast. The third day was the warmest and racers were subject to the worst heat at some of the lower elevations on the route. Nearly half the field dropped from the race; many citing heat or dehydration as reasons they couldn’t continue. Others reported destroyed tires, stomach issues, too much hike-a-bike, boredom, and lack of drive as their reasons for scratching. 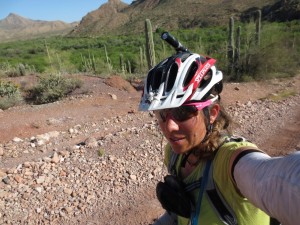 Self-portrait by Eszter Horanyi during her record run in the Arizona Trail 300-mile race.

“Physically, the hardest part of the course was along the Gila River the final day,” Horanyi said. “The temperatures were verging on unbearable and I had to scale back my effort big time to keep my head from boiling over. I definitely spent some time sitting in the shade feeling sorry for myself and trying not to lose my lunch. Mentally, the final seven miles to the finish were killer. It was dark and I was so ready to be done but the trail just refused to end. Oracle Ridge wasn’t exactly easy, but it was more of a mental challenge of staying positive while hiking my bike both up and down hill than a physical one.”

Still, beautiful photos and awestruck recollections of beauty outnumber the tales of woe from this year’s race.

“The sheer amount of fun that I had out there was a little unexpected for a race that has the lowest finishing rate of any of the major bikepacking races,” Horanyi said. “I had sort of braced myself for some pain and suffering, but the riding was so fun, and so much of it was so mentally engaging, that I spent at least 90 percent of the time simply having a really good time riding amazing trails on my bike.”

“I’m incredibly satisfied with how my race unfolded. I knew I had good fitness going into the event, but I had no clue I’d be able to put together that good of a ride. As far as race execution went, I made very few mistakes, wasted very little time, and minimized my trailside fits. While I’m sure I could find a few places to shave a few minutes here and there, I feel like I got pretty close to my speed limit on the route.”

Congrats to everyone who finished this year. The 750-mile race is still going on and can be tracked at http://trackleaders.com/aztr13.