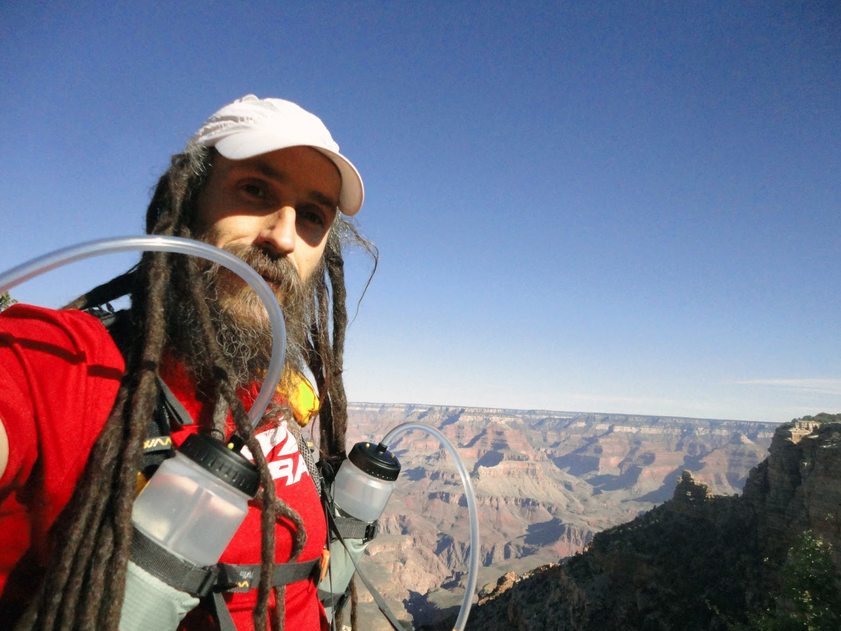 Earlier this week, while Googling the phrase “addicted to endorphins,” I came across the blog of a lanky trail runner with knee-length dreadlocks who adopted the moniker “Ultrapedestrian.” Without yet knowing anything else about him, my first thought was, “Yes, Ultrapedestrian — what a perfect phrase to describe the running/ jogging / power-hiking / scrambling / shuffling / trudging / side-hilling / occasionally-sled-dragging combination that I practice.” Ultrarunning is not nearly descriptive enough when it comes to the beautiful struggle and challenge that is locomotion over long distances.

As I came to learn more about the Ultrapedestrian, Jason “Ras” Vaughn, I learned he recently completed a six-time traverse of the Grand Canyon, a triple rim-to-rim-to-rim in a continuous time of 68 hours and 10 minutes. The effort was part of Ras’s ongoing pursuit of “Only Known Times” — or completion of solo endeavors so outlandish that no one else has ever attempted them. Such unique challenges capture my imagination, and when I learned Ras was a vocal proponent of “slow running,” my intrigue was sealed.

The 41-year-old Rastafarian from Central Washington gave an interview to TrailRunner Magazine this week, expanding on his position:

“My philosophy of running/adventuring/bipedalism is to use the most efficient, enjoyable and sustainable form of movement for reaching the specific goal in those specific environs. I occasionally do put up a respectable time. … But for me it comes down to fast running not being sustainable running. Just like Nascar driving is not sustainable driving. A competitive runner may have only one or two goal races for the year, and they train and run according to that goal: putting up one or two outstanding performances a year. But I think most runners would rather run well a hundred times a year. From my experience, slower running correlates with fewer injuries and faster recovery, and is optimal for fat-based fueling versus carbohydrate-centric fueling.”

Ras entered the world of trail running as a backpacker who strove to increase his efficiency in order to achieve longer distances in less time. He admits the practices and accoutrements of road and track racing are foreign to him. “My worldview presupposes the need or desire to cover the same amount of mileage again this afternoon, and tomorrow,” he explains.

“But I am not against fast running,” he told TrailRunner. “I don’t think it’s wrong. I am as impressed and inspired by and in awe of the elite runners as anyone else, and I respect and admire them. What I take issue with is a culture that worships speed as the only standard by which to judge achievement. It’s time for Trail Culture to democratize running.”

Democratization of trail running — it’s a concept that makes you think. In trail running, as in any human endeavor, there are elite runners, and then there is the vast majority that is everyone else — as Ras aptly put it, “Running’s 99 percent.” Within the 99 percent there are a wide range of abilities, desires, goals, and limitations — and yet cultural conventions assume everyone aspires to mimic the 1 percent elite. Runners such as Ras occasionally step into the spotlight to remind us that it’s okay to be different, and it’s okay to aspire to unique and occasionally outlandish goals that bring personal fulfillment rather than parsing out the hierarchy of the 99 percent.

Ras’ philosophies are compelling, and could be seen as Zen questions for other runners searching for their own way in the democracy of trail running:

On trail running developing into an unhealthy addiction:

“Whether running can be an addiction or not is immaterial. Trail running predates the cultivation of poppies or marijuana or any other form of agriculture. It predates religion. It predates human speech. Trail running is an essential and quintessential human activity, an artifact from the Savannah, from when we were just distinguishing ourselves from the broader designation of ‘hominid’. Trail running cannot become an unhealthy addiction because it is neither unhealthy nor addicting. It is a proto-human behavior, a thing so deeply ingrained in us that the two cannot be separated, we from it. And there’s little profit in accusing us of being addicted to our own humanity.

On deciding to not use his usual minimalist shoes for a 200-mile trail run:

“When retrieving a piping hot casserole from the oven one uses an oven mitt; there’s no possibility of going ‘minimal’, one needs a tool to do something with one’s hand that would otherwise cause harm or damage.”

“Another mental technique I use when I am losing the drive to keep moving, or am tempted to stop, or feel overwhelmed by the distance, is that I consider Sisyphus. Rolling a rock uphill only to watch it roll back down, then again roll it up, for all eternity would be a rather brutal form of fartlek, a punishing type of interval, a star-crossed sort of cross training. In comparison, spending eternity hiking uphill simply to run back down and then began hiking up once more doesn’t sound all that bad. In fact, it’s a fairly apt trail description for the Wonderland Trail. If this was all I was going to do for the rest of eternity, I was okay with that. I could settle into that, find my pace, and keep moving.”

“Ultrarunning is a search for one’s own personal limits. Before I began running crazy distances, I never thought I could complete a marathon. Then I did. But I still thought there was no way I could run 50 kilometers or 50 miles. But it turns out I can. So as I continue to find out what things I CAN do, the question remains; what is it that I CAN’T do? I entered this race partly because last year, before the start of the Cascade Crest Classic 100 Mile Endurance Run in Easton, Washington, race director Charlie Crissman had said, “If you have never DNF’d then you need to run harder races.” Well, Charlie, I still haven’t DNF’d. What’s the next test?”

On the future of Ultrarunning:

“Competitive Running will continue toward homogeneity. As sponsors invest more and more money into athletes and races, they will expect those athletes and races to produce more and more money. This will be accomplished not by bringing the average person onto the trail, but by bringing trail running into the average person’s living room via television and internet.

Multiple loop courses will become de rigueur because they facilitate broadcasting. The smaller the loop, and the more laps required to make the distance, the less race and media infrastructure will be needed to create a network quality sports show. A fleet of cameramen is far more affordable than a fleet of helicopters, which would be needed to film a point to point 100 miler. Profits will increase, and with them will come all the baggage and benefits of any professional sport.

Conversely, Adventure Running, running for challenge, achievement, and experience, will follow its bliss away from the trappings and limitations of Competitive Running.

I foresee the advent of the Age of the Non-Standard Distance, organic distances based on geographic features. Classic trails, mountains, and rivers will define race courses. Upon completion of the 93 mile Wonderland Trail around the base of Mount Rainier, in Washington State, one doesn’t think, “Just seven more miles and it would have been perfect.” Running around The Mountain is enough, and if 93 is the number, then 93 is just fine. In trail culture each trail stands on it’s own as a test piece. How does the Tahoe Rim Trail compare to the Rim to Rim to Rim? It doesn’t. It doesn’t have to. The trail, the environs, and the geographic features define the course. The measurement is an afterthought.

New paradigms of achievement will arise. Speed will still be valued, but not at the expense of everything else, more in terms of efficiency. Style, in the alpine sense of technique or methodology, will be more highly revered. Sustainability in every sense will become a paramount ethic; not only in terms of making use of the natural world in a way that preserves it, but also in a way that preserves the athlete and promotes their well being and continued striving. Unsupported, self supported, and multi-day events will proliferate, allowing fastpackers and hikers to participate in some of the same events as ultrarunners and trail runners. Fastest Known Times, Only Known Times, Thruhikes, and Peak Bagging will capture the imagination and ambitions of greater numbers of runners.”

6 thoughts on “The philosophies of Ras”