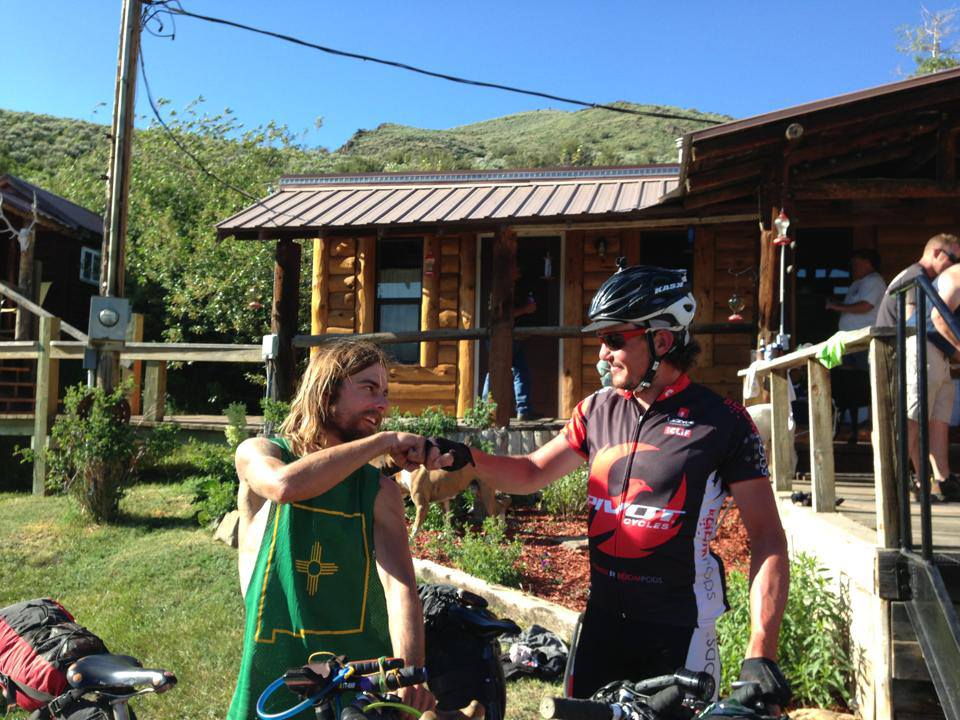 Tour Divide riders pedaling into Saturday night were treated to a rare “Supermoon” — when the moon reaches its closest point to the Earth while full, making it appear larger and brighter than usual. It might provide some relief to tired eyes as Tour Dividers approach their ninth long day on the route.

Leader Mike Hall put a considerable gap on second position rider Craig Stappler. Hall credited Thursday/Friday’s “all-day attack” across the Great Divide Basin into Rawlins for the big lead. “I couldn’t shake him riding into Atlantic City,” Hall said. Hall rode through the night and into the next day, taking a short respite at the Brush Mountain Lodge, where an unknown prankster allegedly filled his saddlebag with rocks. “Thanks for that,” Hall said after he discovered the extra cargo in Steamboat Springs.

Hall reached the town of Silverthorne, Colorado, more than 24 hours ahead of record pace, and continued beyond Breckenridge toward the high alpine plateaus of central Colorado. He enjoyed riding a technical segment of singletrack called the Gold Dust Trail after dark. “Super fun adrenaline night cap,” he tweeted. “Here come the endorphins woo.” Hall now has fewer than a thousand miles to ride to Antelope Wells, and has been averaging 212 miles per day. If he continues at this pace, he could shatter an already stout record pace, provided he can hold off mechanicals, injuries, wildfires, and of course, his competition.

Stappler, however, appears to be slowing down right now. “I made a bad mistake, spent a brutal night on Union Pass,” he reported. Union Pass is a high, windy plateau in Wyoming and Stappler was up there on a particularly cold night. Since then, Stappler said need to take some more rest in order to recover. On Saturday, he spent time in Steamboat Springs to get new tires, and appeared to be spending the night in Kremmling, about eighty miles behind Hall.

In third position, Jesse Carlsson continued his steady grind and was about eighty miles behind Stappler. Triple Crown rider Forrest Baker had jumped into sixth position, and is currently the top American in the race. Not bad for a guy who’s already put in a steady spring of hard racing with the Stagecoach 400 in California and the Arizona Trail Race 750.

In the northbound race, the two remaining racers, Cjell Money and Dylan Stewart, face a potential (many might say likely) roadblock once they cross the Canadian border. Record flooding across a wide swath of the region has caused extensive damage to road and trail infrastructure, which officials are only beginning to assess. Highway 1 into the Bow Valley from Calgary remained closed, and the extent of damage to segments of the Great Divide Mountain Bike route is unknown. However, Jason Kucey, owner of Soul Ski and Bike in Banff, reported the access was likely treacherous at best. “If NoBo’s can even get through Kananaskis all 3 bridges on Goat Creek are washed out and will not be replaced for some time, he reported. “This trail is closed indefinitely with excessive damage to trail and surrounding infrastructure.” Potential detour options are being explored.

In the women’s race, Sara Dallman was still about 90 miles in front of Kristen Arnold, and remains on about a 24-day pace.