The northbound and southbound Tour Divide race came together on Friday afternoon when southbound leader Mike Hall and northbound leader Cjell Money met at the iconic respite of the Brush Mountain Lodge. The meeting is known to fans as the “Golden Spoke,” and this year it was symbolically driven into the route at the same spot as the 2011 race — when the southbound route was shorter due to snow detours.

Thursday had been a big night of racing as Hall continued pedaling across the Great Divide Basin while Craig Stappler slept, putting as many as eighty miles on nearest chaser by morning.

“Figured I may as well get the basin done and roll into Rawlins for brekko,” Hall posted on Twitter. Still had two full water bottles when I got there.”

It appeared Stappler was falling off the back, but then Hall finally stopped for a longer rest at Brush Mountain Lodge, where he ate, showered, laundered some clothing, caught up with lodge owner and Tour Divide fan Kirsten Hendrickson, learned that Cjell Money was nearing the lodge, and decided to stick around for a photo op. Hall reportedly left the lodge around 6 p.m. Friday, about three or four hours before Stappler arrived.

Not to be discounted is third position rider Jesse Carlsson, who as of Friday night was in Rawlins, Wyoming, about 90 miles behind Stappler. The Australian has put in a persistant effort, staying ahead of record pace with little rest. His stop time was a mere 1:22, for a moving average of 11.2 mph. The fourth position rider, James Olsen, was nearly 200 miles behind him. 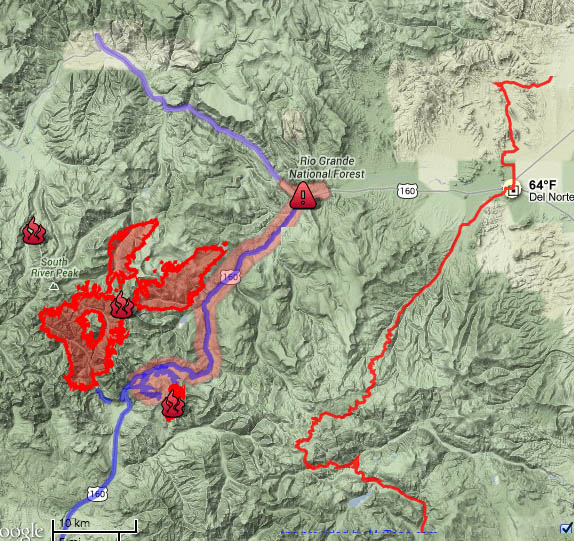 Fire danger continues to be a major concern as the leaders approach the southern portions of the Tour Divide. About 400 miles away in Del Norte, Colorado, the West Fork fire is raging in close proximity to the route. Crews were still fighting to protect the neighboring community of South Fork, which faces obliteration if the wildfire continues on its current path. Above is a graphic of the fire complex from the Denver Post, with the Great Divide Mountain Bike Route overlaid to show its proximity. Some actively burning areas are fewer than ten miles from the route; smoke and newly sparked blazes could become a major hazard. How these and other fires will affect this year’s Tour Divide is unknown.

While rain is desperately needed in southern Colorado, the major storm in the north seems to be drying out, giving riders back in Montana some respite. However, much of the region surrounding the Flathead Valley of Canada experienced major storm damage, with bridges washing out, flooding, and landslides burying roads. The extent of damage on the northern section of the route is also unknown.

Cjell Money continued pedaling late into the evening and may reach Rawlins before morning. Mike Hall reached Steamboat Springs at 10:25 p.m. and reported that his SPOT tracker doesn’t seem to be working.

Track the Tour Divide at this link.