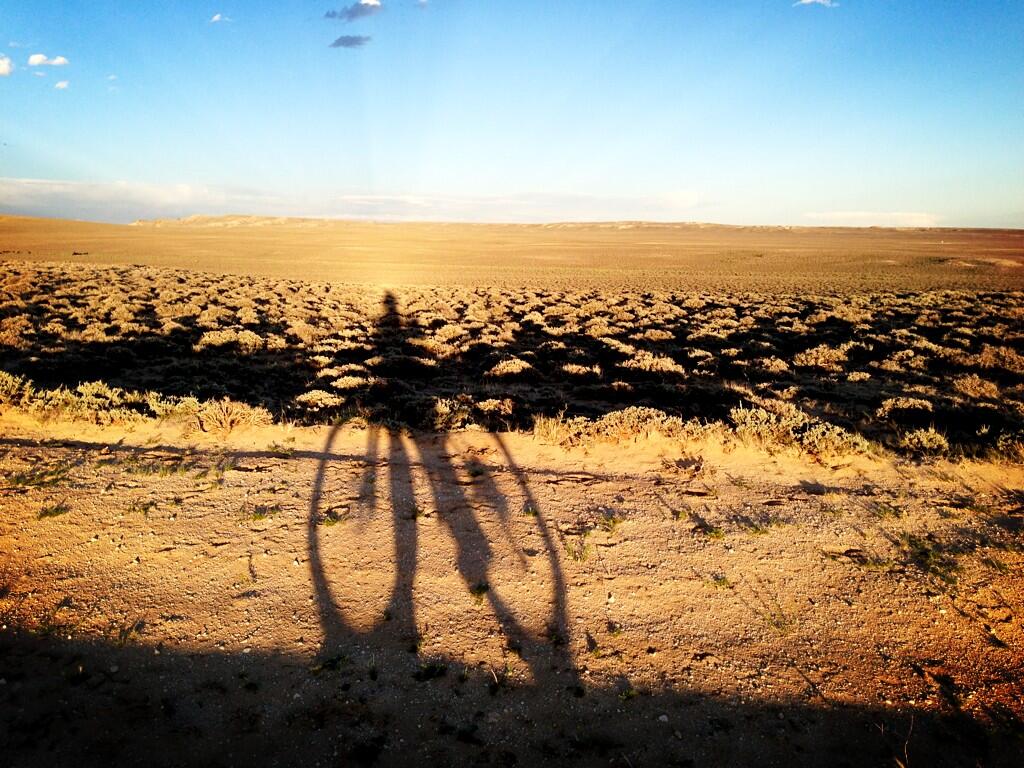 Alex Harris captures his shadow in the evening light over the Great Divide Basin on June 23.

As Tour Divide leader Mike Hall neared new Mexico well ahead of record pace, the likelihood that he’ll be able to set an official course record this year was further diminished by an announcement that part of the route near Silver City, New Mexico, would be closed to the public due to fire danger. Also on Monday, Santa Fe National Forest — which is a couple hundred miles north — officially closed to the public. Both regions include forest roads that are part of the Great Divide Mountain Bike Route.

“We just got word that the Silver Fire has closed Forest Service Road 150 which runs between The Gila and Aldo Leopold Wilderness Areas,” reported Casey Greene, a cartographer with Adventure Cycling Association. “The closure is between the Beaverhead Work Center and Highway 35. This will require a massive road detour to the west. Roads to the south are still closed as well, including those on our Southern Tier Route. We are looking into detours for ACA tourists, but racers should wait for an official TD detour (they may be the same).”

Although there’s no word yet on whether the Tour Divide has established an official race detour or acquired a special use permit for mountain bikers in Santa Fe National Forest between Abiquiu and Cuba, it seems as though all riders will have to reroute around the Gila National Forest farther south. Either way, the bikepacking community has established that new records must be set on the most recent official GDMBR route as set by Adventure Cycling Association. Any temporary detours would preclude 2013 race results from the overall record classification, which unfortunately could also preclude Hall’s unprecedented ride should he reach Antelope Wells faster than Jay Petervary did in September 2012. But Hall can still establish a blazingly fast win for the 2013 Grande Depart, and he appears to be seeking just that.

Hall called in from Del Norte in the morning after spending a night high on a pass north of town to escape the wildfire smoke he could see filling the valleys. However, during the night winds shifted and he found Del Norte to be relatively clear. “It’s a lot less smokey that previously advertised here,” he said. “The wind seemed to have changed direction.” He also reported a minor incident riding into town. “I took a little tumble in the gravel this morning, but bike and body are all right.”

Hall remains on a 200-plus mile-per-day average pace. About 200 miles behind him, second position rider Jesse Carlsson was continuing on the route after a crash and possible encounter with lightning during an electrical storm in Como on Sunday night. After determining his body and bike were in good shape on Monday morning, he set out with ITT rider Kerrin Walker. The two appeared to ride together for most of the day.

There appears to be a closer race among third, fourth, fifth, and sixth position riders Alex Harris, James Olsen, Liam Crowley, and Forrest Baker, who were within 100 miles of each other — about 400 miles behind Hall.

With flood damage in Canada still promising unknown obstacles for northbound riders Cjell Money and Dylan Stewart, it appears that potentially the only current Tour Divide rider who might ride the whole route is yo-yo rider Billy Rice, who already completed a single run of the GDMBR when he finished his Mexico-to-Banff ride last week. Now that he has turned south, he will also have to face detours if conditions don’t change in the next week. For having so many miles on his legs, Rice continues to make impressive progress, and is now more than 1,000 miles into his southbound return.