After taking a highway detour from Abiquiu to Cuba, New Mexico, Mike Hall posted this picture to his Twitter account with the caption, “Buy a massive ice cream and think it over obviously.”

Tour Divide leader Mike Hall arrived in Abiquiu, New Mexico, on Tuesday afternoon after more than a day without contact with outside world. It was there he learned his former closest competitor, Craig Stappler, had withdrawn from the race, and that the National Forest Service had closed the next segment of fire road into Santa Fe National Forest.

“They have told me that Santa Fe National Forest is in complete closure, and I’m going to need to go around on the 96 to Cuba,” he reported, and apologized for a scratchy voice from days of pedaling through the smokey, dusty heat. 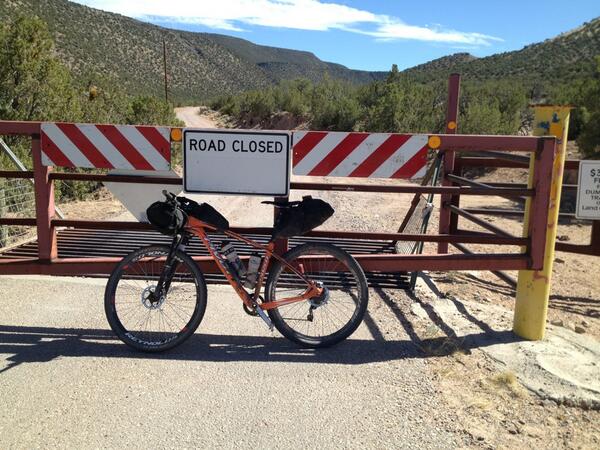 Another photo from Mike Hall of his bike at the road closure. “And no sneaking through either, the forestry called the place I had lunch at, they were obviously following.”

Hall took the highway detour and arrived in Cuba on Tuesday evening. A Twitter post indicated that he needed to “think it over.” The detour, which all Tour Divide racers will likely have to take this year, means that Hall’s likely fast finish won’t be classified as a course record. Established Tour Divide rules stipulate that: “Aside from four permitted deviations, challengers must always ride 100 percent of the Great Divide ‘main route’ as denoted by the most current map edition published by Adventure Cycling Association.” Although road closures and impassable obstacles allow riders to legally take alternative routes within the context of the 2013 race, the overall record becomes unobtainable. As of Abiquiu, Hall was still 24 hours ahead of record pace, with fewer than 600 miles left in the race.

“So when your main rival has gone home, the route is on lock down and your nearest competitor is 200 miles away, what do you do?” he wrote.

Back in Wyoming, another Tour Divide rider was apparently hit by a car and injured while riding a paved road into Rawlins, Wyoming. Australians Walter Brumniach and Hugh Harvey were riding together when Brumniach was reportedly stuck by a pickup. Harvey accompanied him in an ambulance to a hospital in Rawlins, where Brumniach was transported to Fort Collins, Colorado. Zac Brumniach posted to his Trackleaders page: “Wal is in the orthopaedic centre of the Rockies, Fort Collins, Colorado. Hit by car yesterday. Surgery tomorrow on elbow, he will be okay.”

Harvey returned to the point where Brumniach was struck and continued his ride. He posted an update: “All okay here. Some drama yesterday that has delayed me a day. The weather and good fortune I had been enjoying made me look like a much better cyclist than I am. Original schedule was 21 days. Doesn’t matter about where I finish but still have desire to finish this really difficult race.” As of Tuesday night, Harvey had just crossed the Colorado border.

Northbound leader Cjell Money also checked in on Tuesday to chat about the southbounders he’d met as he makes his way north, but lamented that “since I can’t make it to Banff, I’m not sure what I’m going to do.” However, Money said he plans to keep pushing toward Canada.

Track the race at Trackleaders.com.