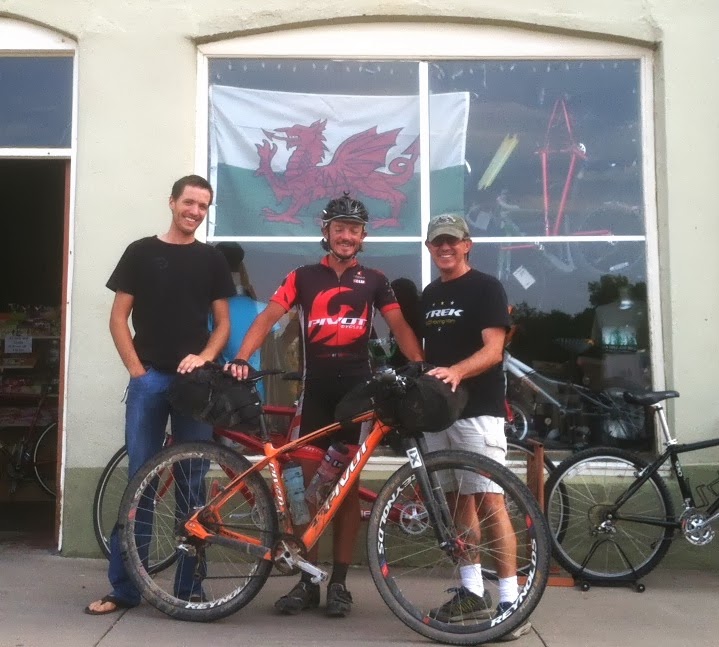 Jack Brennan, race director of Tour of the Gila and proprietor of Gila Hike & Bike in Silver City, ordered a Welsh flag to fly at the shop in honor of Mike Hall, center. Photo via Matt Lee.

With just over 14 days on the Tour Divide race clock, leader Mike Hall was making his way down the home stretch south of Silver City — the last 125 miles to the U.S./Mexican border at Antelope Wells. He should have no problem wrapping up his ride in less than 15 days, despite wildfire detours and the resulting relaxation of his pace. And although detours preclude the official record, it will be the fastest recorded ride on the Great Divide Mountain Bike Route yet — including previous border-to-border finishes in the Great Divide Race.

About 200 miles back, second position rider Jesse Carlsson was leaving Grants. The weather across New Mexico was rough on Friday, with temperatures in the mid- to high-90s and south-east winds (often headwinds) blowing to 20 mph.

In third and fourth, Alex Harris and Liam Crowley were both back in Abiquiu, where the first fire detour begins. It’s unclear whether ITT rider Kerrin Walker took this detour, as his GPS tracker didn’t register for that entire section from Abiquiu to Cuba, but is back on again as he makes his way toward Grants.

In the women’s race, Sara Dallman was making strong progress toward Kremmling, Colorado. Kristen Arnold is holding steady about fifty miles behind Dallman, but maintaining an impressive pace after taking nearly a full day off back in Montana to deal with ankle issues.

I apologize for the short update, as I’m preparing for weekend plans. I won’t be able to post updates for the rest of the weekend, as I’m headed to the Western States 100 to crew for a runner. Perhaps a kind reader could post in the comments when Mike Hall finishes. Thanks for reading.