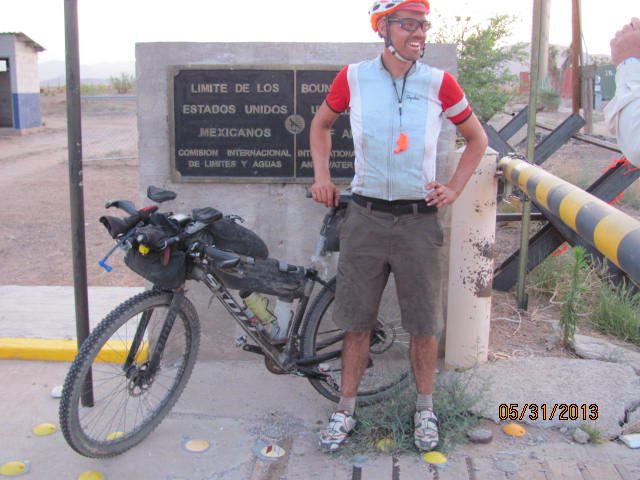 Jesse Carlsson at the finish Saturday in Antelope Wells.

Day 17 of the Tour Divide brought a tight international race for a podium spot that may have ended in a sprint finish between James Olsen, Alex Harris, and Liam Crowley. Trackleaders recorded Harris of South Africa into Antelope Wells at 1:28 p.m. for a finish of 17 days, 5 hours, and 28 minutes. Olsen, from the United Kingdom, tracked about a minute late in 17 days, 5 hours, and 29 minutes, and Crowley of Australia tracked about 5 minutes later at 1:36. Official finishing postions will have to wait until the guys call in with their standings.

Nearly three days in front of them, Mike Hall finished on Friday in the fastest time ever posted along any variation of the Great Divide Mountain Bike Route, 14 days, 11 hours, and 28 minutes. Jesse Carlsson of Australia finished second in 15 days, 12 hours, and 8 minutes.

Also this weekend, Cjell Money won the northbound race, finishing at 6:58 p.m. Saturday at the U.S.-Canada border. He stopped 270 miles short of Banff because of flooding damage, but his finish followed the same route as the Great Divide Race. This would put his finishing time on that route under 16 days, faster than Mike Curiak’s record in the original Great Divide Race in 2004.

“My best times of the entire trip were sunrises and sunsets,” Money reported. “The worst would be night riding. Being exhausted, being tired, and not being able to see well, and they all come together in night riding. I’m pretty sure I’m done night riding.”

Although no one was at the border to see Money finish, he said he did manage a quick celebration. “It was me and a drunk Canadian man at the bar up there, and we celebrated together. He did buy me a beer, so I guess that counts.”

Jesse Carlsson said he fought “incredible winds” for the final miles into Antelope Wells. He also reported that the reroutes around sections closed due to wildfire danger weren’t as simple as he expected. “The reroute — 159 is a number I won’t forget for a long time. There’s a lovely climb back about 9,000 feet and a fantastic descent that took me through a small town that makes you feel like one of those time-trial motorbike riders,” he said. But endless rolling hills into Silver City wore him down. “Nothing is easy on the Tour Divide, even the easy parts.”

There’s still a spot open for “first American” in the 2013 Tour Divide, which appears to be going to Brian Pal of Washington, who was about 65 miles from the border as of Monday afternoon and well on his way to a sixth-place finish.

Hall reported minimal equipment damage during his ride — just some slow leaks in his tires and chain skipping after 2,700 miles. He was riding a Pivot Les hardtail with a a Kinesis IX carbon 29er fork and 1 x 10 speed XTR transmission. The wheels were Reynolds 29er carbon rims drilled with 32 holes for extra strength. Hall also reported losing three kilograms during the ride. “I should have a three kilo pie then!” he said.