The starters of the 2013 Alaska Wilderness Summer Classic. Photo from Luc Mehl.

Earlier this week, the summer 2013 version of the Alaska Wilderness Classic came to its quiet conclusion, and those who track the officially unofficial event posted a preliminary report: “This just in. The 2013 Classic took 7 1/2 days to finish this year. Five out of thirteen racers finished.”

Seven and a half days. For approximately 150 miles. That’s race pace. That’s the Wilderness Classic. 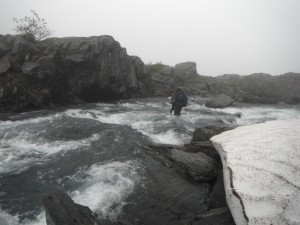 Luc Mehl posted the basic information for the event, along with applications, on his blog: “We will keep the same start and end points, Thompson Pass and McCarthy. The overland option is a candidate for the hardest Classic route to date. If you are looking to test your wilderness skill set, this is a good one. As usual, the Classic doesn’t formally exist. We learned a lot about the course options in 2012; namely that the brush is bad. All non-glacier teams encountered the same minimum rate of progress: 3 miles in 12 hours. The glacier options are 50 miles longer and require winter gear and crevasse rescue equipment.”

Launched in 1982, the Alaska Wilderness Classic is considered the first true wilderness race. The race has a starting point and a finish point, somewhere in Alaska, with no required or set route. No traveling on roads. No motorized vehicles. Carry everything. Drop nothing. No food or equipment pick-ups or drops. Grizzly bear country, and bears are the least of the hazards. The race region changes every three years, and usually takes three to six days to traverse.

Another, less harrowing, description of the race is “Just a group of friends who like to party in two places, 150 miles and a week apart.”

“None of the finishers from 2012 returned this year. Makes you wonder,” wrote Mehl, who helped create that diabolical route across the Wrangell mountains. “The five finishers (effectively seven) travelled the Bremner Brush route, 150 miles from Thompson Pass to McCarthy, in nearly 7.5 days. The route was even harder this year due to less snow and higher water.” 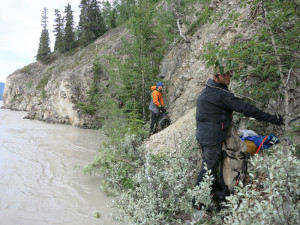 The winners of the race in 7 days, 8 hours, and 42 minutes were Lee Helzer, Steve Duby, and Lee Jenkins. Helzer and Duby teamed up at the last minute after both of their partners dropped before the event. Both took a swim early in the race while packrafting the upper Tasnuna River, but recovered their gear and went onto a strong finish. Jenkins was a solo entry from South Africa who joined the team just a few miles before the finish.

“Everyone was nervous how he would handle the wilderness,” Mehl wrote. “He travelled alone and the guys that saw him on the course said he was ‘legit,’ with exceptional strength in the water; he is a competitive kayaker in South Africa. Even so, he lost his paddle and stove on the Tasnuna (while trying to use his Jetboil in the boat) and finished the race hand-paddling the rest of the rivers. He was wide-eyed at the end, convinced that this was as much a mental as a physical challenge, and very grateful for the experience. He was also convinced that he didn’t need a zero-degree sleeping bag.”

Rob Kehrer and Greg Mills finished in 7 days, 11 hours, and 15 minutes. The men, who call themselves “Team Heavy,” had attempted and fallen short on the McCarthy route before, in the 2012 summer race and 2013 winter race, and were determined to finish this time around.

“Team Heavy is also becoming a misnomer,” Mehl wrote. “They cut gear comforts and don’t sleep much. Near the end of this course Greg was mapping their location while Rob read coordinates off the GPS. Rob would read, “61 …” and fall asleep. Greg would wake him, and ask for the coordinates again. “61 …” asleep. This happened for several minutes. Later, the roles were reversed. Greg would nod off for 15 seconds, snap-to, and demand of Rob, “How long was I out for!?” “Uh… I don’t know man, maybe like 15 seconds?” Repeat.”

The team of Danny Powers and Wyatt Mayo of Fairbanks flew out from Lakina Lake after Powers developed a seriously infected rash on his butt. Powers arrived at the hospital with a fever of 104.

Toby Schwoener and Tory Dugan, brothers from Anchorage and Valdez, ran into uncrossable terrain while attempting to pioneer an alpine route to avoid the heinous brush section.

Kalin King and Chris Shumate, police officers in Valdez, assisted Duby after his swim but ultimately had to scratch due to injury.

John Lapkass of Anchorage and Michael Martin of Seattle also tried to pioneer a different route to avoid brush, only to encounter even thicker brush in the Tiekle River drainage.

Thank you to Luc Mehl for providing such great coverage of this low-key event. Check out more pictures and in-depth reporting at his blog.

One thought on “Wilderness Classic: A race at 1.2 mph”