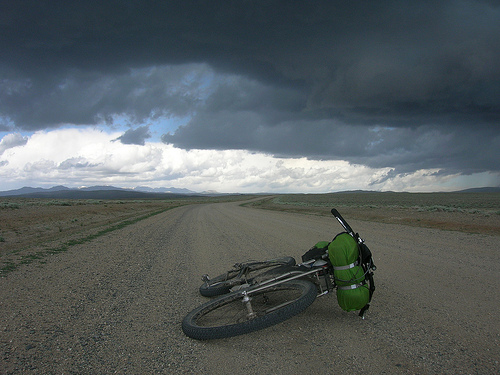 A barrage of mountain bikers reached Antelope Wells on July 4 and 5, bringing the total finishers of the Tour Divide to 22 so far.

James Olsen provided confirmation of the podium sprint, reporting that “Alex was third, Liam was fourth pretty much on his wheel, and I got fifth a 100 meters or more back. We’d been within less than an hour of each other since Pie Town and formed a bunch again with thirty or so miles to go. We agreed that to sprint out the last mile was more fitting than cruising over the line together – damn my 34T single ring as we wound up the sprint! After racing so closely with riders of Liam and Alex’s class I’m totally happy with the way it all went. Congratulations to Alex for taking the podium spot, he’s a great guy, a tough rider and his experience came through so many times on the TDR. I wouldn’t have ridden as well without him on my case so often. And to Mike and Jesse – what can I say. We were simply amazed by how you rode. Congratulations!” The three reached the finish in 17 days, five hours, and about 30 minutes.

Brian Pal of Medina, Washington, was the first U.S. resident to reach the finish in 17 days, 9 hours and 28 minutes. Leo Pershall of San Anselmo, California, was seventh in 18 days, 1 hour, and 35 minutes, followed by the “Swiss Train” of Saemi Burkart and Reto Koller in 18 days, 12 hours, and 10 minutes. “Triple Crown” rider Forrest Baker of Sunnyvale, California, rounded out the top ten right behind them in 18 days, 12 hours, and 22 minutes. This is the first time in Divide racing that not a single top-ten finisher hailed from the Rocky Mountain region.

In other news, yo-yo rider Billy Rice was able to secure a permit from the U.S. Forest Service to ride through the closed segments of the Great Divide Mountain Bike Route in New Mexico. He rode over the Polvadera Mesa on July 4 and reported that while he secured a permit for the closed F.R. 150 through the Gila National Forest, there were also rumors that the region has re-opened to the public. Either way, this means he will be able to complete the entire course both directions and establish an “official” record for an out-and-back ride of the GDMBR. Rice’s permit was an enter-at-your-own-risk special case, so other Tour Divide riders will continue to detour around the still-blockaded Polvadera Mesa, which was closed due to fire danger. Rice was able to secure his permit through a combination of legwork and timing — the parched deserts have received some rain since winner Mike Hall was forced to detour around the mesa. The rain events persuaded Forest Service officials to ease their absolute restriction. But Rice still had to secure all of the permissions on his own. That kind of initiative and planning is just part of racing the Tour Divide.

Rice also has been steadily moving through the field after leaving Banff nearly two days after the Grande Depart, and will likely finish this weekend.

In what has been a topsy-turvy year for the Tour Divide, Matt Lee reported another roadblock caused by extreme weather, this one on the second detour through the Gila National Forest in New Mexico. “Last night the Bursom Road detour (FR28/NM159), which is the 2nd NM detour (in the Gila), washed away in the ghost town of Mogollon due to a flash flood. It has at least four to five guys stopped there currently, but just as of late, it appears they are getting across. It’s only a few miles from NM180,” Lee wrote.

“This new closure precipitated a serious look by USFS at the FR150 closure from Beaverhead Work Ctr to NM35 on the main ACA route. It was deemed ready to reopen, despite some flash-flooding of it’s own last night.”

Lee said he made an effort to contact individual racers, but it is likely some won’t receive the news. Either way, both routes are open for riders to attempt within the constructs of the race rules. Hopefully the flash flooded sections are not too dangerous.

Here are the current unoffocial (Trackleaders-derived) standings in the Tour Divide as of Friday afternoon: