Heather “Anish” Anderson takes a self portrait on top of Glenn Pass in California.

“My day starts at 5 am. I will walk all day at 3 mph, stopping only to get water, dump sand from my shoes or such. Each stop lasts but a few minutes. I walk until the miles pile up, until night falls and my headlamp comes out, until the aching in my feet and legs seems unbearable. The last miles I am stumbling, tripping. Finally, I pitch my tent on whatever surface is available. It may be flat, or not, or rock hard, but it is home for the next few hours. Inside I struggle to choke down a protein shake; my exhaustion overrides my hunger. I peel socks off from blistered swollen feet. I crawl into my sleeping bag and prop my feet on my food bag. Pain, spasms, cramps, sharp cries that shoot along my nerves; my legs and feet make it hard for me to sleep. I clench my teeth against the jolts and wait for exhaustion to overcome me again.”

Heather Anderson, trail name “Anish,” is currently on a journey to establish a new overall speed record for the Pacific Crest Trail, a 2,655-mile mountainous route that runs the length of the Sierra Nevada and Cascade mountain ranges in California, Oregon, and Washington. The current fastest known time, established by Scott Williamson and Adam Bradley in 2009 in a similar unsupported effort, stands at 65 days, 9 hours. There is no official women’s FKT. To pursue this goal, Anish has been hiking an average of about 40 miles a day, every day. She started June 8 at the Mexican border, and after five weeks of searing heat in the Sonoran and Mojave deserts, altitude and thunderstorms in the high Sierra, and bugs and fatigue in northern California, reached the Oregon border on July 17.

“I go into this adventure to challenge myself — to push beyond my perceived limits,” she wrote when announcing her intentions on the Fastest Known Time message board. “I will approach this hike as a solo thru-hiker, carrying all of my gear and supplies. My steps will connect from monument to monument. I will not ride in a car until I am done, walking into and out of towns (along the same route) to obtain what I need along the way. I will not have pre-arranged support meeting me with anything. I will carry a SPOT beacon and check in on a regular basis for verification purposes.” 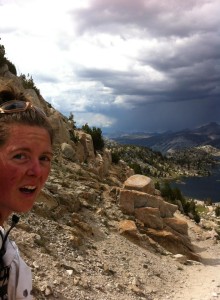 Personally, I find efforts such as Anish’s PCT attempt to be deeply intriguing, perhaps more so than any other human athletic endeavor. A solo through-hike is a puzzle with so many compelling layers — the solitude, the self-sufficiency, the strategy, the adaptation, the staggering distances, the necessary sustainability, the force of imagination and the unceasing willpower. Not to mention the “everywoman” aspect of those who attempt such journeys. People who aim for fastest known times on long-distance trails are rarely the genetically gifted and fine-tuned athletes who can be more difficult to relate to on a human level. No, through-hikers are often people like Heather Anderson, who hails from Washington state, who likes to eat Oreos dipped in coconut oil for dinner, and who simply “longs for a never-ending trail and everlasting lungs.” Me too, Anish. Me too.

Of course, those who set out to push boundaries will always have critics. When the Pacific Crest Trail Association announced Anish’s progress on Facebook, a man named Mike Webb wrote a scathing response: “These trail speed demons need to stop getting attention. It is completely against the spirit of the wilderness. I am sure this person will hire a ghostwriter to make up things that they ‘saw’ while hiking. ‘Hike Your Own Hike’ is great until it begins to give the wrong impression of what a long distance trail really is.”

It’s a common impression that, unless you stop moving all together, it’s impossible to appreciate or even look at the scenery. That somehow by hiking 40-plus miles a day, for upwards of 16 hours a day, a person can travel 2,600 miles without seeing anything. That because Anish has blisters and tired legs and dinners comprised of Oreos smeared in almond butter and wrapped in tortillas, that she is certainly not having any “fun.”

I wonder if these critics could imagine how Anish might draw deeper inspiration from her surroundings by moving through the world rather than standing still; how solitude gives her the freedom to soak everything in without distraction; how fatigue helps her shed ego and expectations so she can experience each moment with the wide-eyed awe of a child; how “pushing the envelope” of human endurance also helps individuals break through the hard plaster shells — the habits, the routines, the prejudices — that have formed around their own lives.

Although people can certainly push limits without specific numbers and goals, speed records provide something of a benchmark — an idea that a far edge has been approached before, and can be approached again and possibly surpassed. It’s a common belief that people who chase “records” — whether or not they’re deemed legitimate or arbitrary — do so only for external validation. And while this is always partially true, internal motivations usually play a much greater role in endeavors that demand so much energy, take so many resources, and provide so few “rewards.” Should Anish reach Canada faster than 65 days, there will be nothing waiting for her at the border besides rocks, trees, and perhaps a close friend or two. She will receive no award besides a plain-text listing on an obscure Web forum. Gear companies won’t line up to sponsor her because the public at large has minimal understanding, and therefore minimal interest, in what it takes to grind out 40 miles a day, day after day after day. So why does Anish hike? Only Anish really knows, and I find this fascinating.

“A few hours later, I am awakened by my alarm. Bleary eyed, I wish to go back to sleep, but then I remember all who believe in me, everyone cheering me on. I think of the sticker on the back of my phone (Never, never, never give up) and the bracelet on my wrist (Nothing great is easy) and I sit up. Bolstered by my task and those who support me I have the courage to put my battered feet back in my worn out shoes and give ‘er hell once again.”

One thought on “Anish Hikes — the quiet pursuit of an FKT”