Billy Rice and his daughter Lina celebrate at the finish in Antelope Wells.

Billy Rice, a tall and unassuming flight paramedic from Bryan, Texas, recently completed a massive 5,500-mile mountain bike ride along the Continental Divide from Mexico to Banff and back in just 44 days. His official completion of the Great Divide Mountain Bike Route was 22 days, 18 hours, and 41 minutes for the northbound ride, and 20 days and 13 hours for the southbound return, for a total time of 44 days and 42 minutes.

“I really tried to shave those 42 minutes,” he said.

To put that in perspective, his southbound ride would have put him in the top 15 of this year’s Tour Divide field, after he’d already completed the entire route northbound. In addition, he was able to obtain permission from the U.S. Forest Service to ride through two previously closed areas of the route, using initiative and ingenuity to attain an official completion and record for the yo-yo Divide.

It’s an impressive ride no matter how you slice it, and yet Rice is almost nonchalant about about his achievement, posting humorous videos on his Facebook page and musings about the strange juxtaposition of technology and solitude as he pedals through rainstorms and films himself with his phone. Rice’s frequent Web postings really brought the scope of his ride into perspective — “Wow, he’s still out there. And it’s still raining. But it looks like he’s still having fun.” 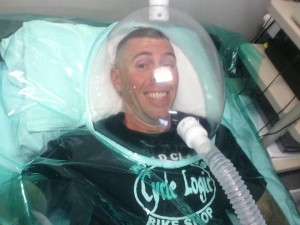 Billy Rice “recovers” in the name of science at Texas A&M University.

In addition to stretching the limits of the fun factor for a single mountain bike ride, Rice is also participating in endurance research at Texas A&M University. After 44 days of consistent movement, he has some unique data to provide to science that will be interesting to learn more about. I caught up with him shortly after he returned from Antelope Wells to ask a few questions:

HPD: First of all, what’s it like to be done? How did you spend your first days off the Divide, and how did you feel?

BR: Done is a very odd thing after racing the Divide. Glad? Yes, but sad at the same time. It’s hard to stop. When you find a great groove out there it’s hard to transition. Great to be home but hard to be back in reality.

HPD: How much weight did you lose?

BR: I lost 22.5 lbs overall. Most of that was southbound when the crazy cold front hit. I did pretty well with my weight management up until then. I started at 212 so I’m not one of those little fast guys up front. It’s hard to maintain weight for me. In Banff, I was around 200. Cold front hit me on Red Meadow Pass and my arm warmers immediately fell off and my suspenders wouldn’t stay up

HPD: I see you’re contributing to some scientific research. There’s got to be some unique data there. Do you mind sharing what exactly you’re researching?

BR: So my degree is in exercise physiology and I’m working on a fellowship in wilderness medicine. It’s like the perfect blend for what we do. I wanted to do something in 2012 but couldn’t get enough attention. There is almost no research on multiday athletes and races like the Tour Divide. Stage races are totally different. They get rest and nutrition. Marathons and even ultras are all just too short to use for what we do.

The number one medical question I get is “did you get rhabdo?” (A condition in which damaged muscle tissue breaks down. Products of damaged muscle cells are released into the bloodstream and may lead to kidney failure.) It has no real relevance for someone who’s been out for weeks. It’s just what people associate with racing. So we need to step up the research game. We are not exactly sure what we are looking for. We don’t really know what Tour Divide racers go through or what adaptations they acquire. So we are looking at everything. The most interesting thing in my file so far is that my resting metabolic rate went up 400 kcal in 44 days. That’s a lot! More to come when we publish. We may even try to expand the research next year. Who knows.

HPD: So, you rode the entire distance on one drivetrain. Was this part of your endurance challenge, or just something that worked out?

BR: So the drivetrain thing kinda started as a joke. I knew from last year that drivetrains could go a long way. After the 2012 Tour Divide, I did several 100-mile races on the same drivetrain. Bike shops always measure my chain and give me some percentage number that I’ve always thought odd. They are always like “it’s more than 80 percent so you need to change your chain”. And I’m always like, “but it rides great …” So I’m just not sure. Scot at Absolute actually turned me onto the idea that drivetrains could do a lot. When I arrived in Banff and it still worked, I decided to go with it. Now I will say by the time I got back to New Mexico, the drivetrain was in rough shape. I wouldn’t do it again but it did do it. I just had to be gentle.

HPD: What would you say was your biggest challenge on your Divide ride? Was this challenge unique to the out-and-back nature of your ride, or was it similar to the tough parts of your first Divide ride?

BR: The biggest challenge was the cold front and rain that followed. It rained on me EVERY day southbound. Like a lot. It rained on me all the way to Antelope Wells! It just never stopped. That gets hard to deal with. It was cold and rainy. So it really had nothing to do with the yo-yo nature of the ride. I’ve always said time on the Divide doesn’t mean much. It seems to go by arbitrarily for me. Doesn’t really connect with me. I would do 40-hour runs in the saddle then do 16, and it all felt the same.

HPD: What was your longest day? Shortest day?

BR: Longest day was riding 260 miles from Eureka, Montana, to Banff (guess I wanted to be there. The shortest, like 65, was Silver City to Beaverhead, New Mexico, during the northbound ride. It was hot and I totally underestimated a northbound start. It’s higher, hotter and dryer. It was a rough day two.

HPD: Did you have any big setbacks such as mechanicals or injury along the way?

BR: Lots of mechanicals. My rear wheel was built improperly which was a major problem. I had it rebuilt in Silver City, but then I had crazy tire problems. I was able to fix my tire in Salida, and in southern Montana I began having crazy rear hub issues. Those cost me serious time. I changed my wheels in Eureka and finally felt squared away. After that, there were no other real issues on the route. I had no injuries, though. I felt fantastic!

HPD: Will you go back?

BR: I want to go back of course but a lot will have to line up. It’s pretty hard on the folks at home. Hopefully next year but we will see.