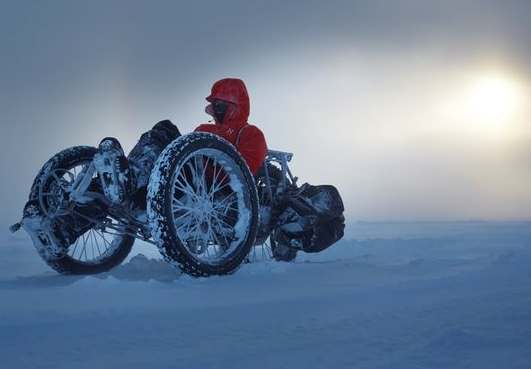 This year’s Antarctic season is gearing up to be an entertaining one for cycling enthusiasts, with three adventurers planning separate solo expeditions in an effort to become the first person to take a bicycle (or tricycle) from the edge of the continent to the South Pole.

Currently, Spanish explorer Juan Menendez Granados and Utah bike shop owner Daniel Burton are waiting out a storm in Punta Arenas, Chile, while they make final preparations to start their trips at the Hercules Inlet. Meanwhile, a British woman, Maria Leijerstam, has recently announced her own attempt, which will begin December 18 on a different, apparently untested route. She plans to traverse the crevasse-ridden Leverett Glacier for 150 kilometers before turning due south on the polar plateau toward the South Pole, some 650 kilometers ahead. Leijerstam’s 800-kilometer route is shorter, mileage-wise, than the route Granados and Burton will travel. And unlike the men, who will be riding standard fat bikes, Leijerstam will be using a recumbent tricycle, developed by experts from Inspired Cycle Engineering of Cornwall with the challenges of Antarctic travel in mind.

“Given the extreme strong winds that blow from the Pole, Maria has decided to cycle in a recumbent position to make herself more aerodynamic,” her team announced in a press release. “She has also chosen three wheels over two due to the fact that there is far less stability in snow when riding at very slow speeds. She has added a pair of 4.5-inch wide tyres to allow for traction and float.”

Maria’s White Ice Cycle expedition has apparently been kept a secret as she’s developed the plan and the equipment, and trained by participating in endurance races such as the Black Ice Race, pedaling a studded-tire bicycle across the 650 kilometers of wind-blown ice on Lake Baikal in Siberia. She’s trained with her tricycle in Iceland and Norway, spent an entire day riding a bike trainer in a freezer at 20 below, and has sought coaching from seasoned Antarctic travelers. For all of the unknowns ahead, she’s set an ambitious schedule — around 20 days — and will carry 45 kilograms of food and supplies — somewhat light relative to other unsupported treks across Antarctica. It will be a race against dwindling food and fuel to pedal 500 miles to the South Pole — and, like Granados and Burton, she hopes to be the first to get there.

As a winter bicycle touring enthusiast, I’ll be most interested to see not only whether these cycle trips to the South Pole will prove successful, but also how they’re achieved. Each participant has a slightly different strategy: Granados will be dragging two sleds at the start and using skis, while Burton will have a sled and pannier gear set-up and carbon fat bike. All set-ups will likely have both advantages and disadvantages in terms of float on the snow crust. However, it seems likely that the most difficult obstacle will be wind, which blows at near-constant gales from the south — meaning the cyclists will have to deal with the challenge of consistent strong headwinds in addition to deep subzero cold, occasional whiteout fog, and blizzards.

Any bicycle tourist who’s pedaled a loaded bike into a headwind on an open plain will understand just how debilitating wind can be. A few years back, while on a bicycle tour across Nebraska, I encountered a south wind blowing sustained at 40 to 45 mph and gusting up to 60 mph — enough to blow me off my bike if it blasted from the side. Pedaling directly into the wind, I struggled to achieve a pedaling speed of 5 mph, despite a lung-busting effort. And this was the case on hard pavement, with gear and a bike that, while heavy for a bike tourist, only added up to about 80 pounds. Add the abrasive resistance of sand-like snow, loose snow on the surface of the harder crust, frequent sastrugi — or wind-hardened snow formations, and expedition loads, and you have an equation for an extremely strenuous undertaking. Given the human limitations of even the most trained endurance athletes, one wonders just how fast a bicycle can even move in Antarctica, or how much ground it can cover. Based on the handful of expeditions attempted so far, it seems distances around 15 to 20 miles a day — a standard skier’s pace — are to be expected. Although Leijerstam’s recumbent position will likely provide an aerodynamic advantage, it goes without saying that the strongest cyclists will prevail in the face of relentless winds.

Not that pedaling a bicycle at walking pace is a bad thing, but it does beg the question of whether cycling is really a reasonable form of travel in Antarctica, or just a novelty or something to be sought after right now because it hasn’t been done before. With three expeditions setting out soon, there should be more insight into the puzzle of bicycle travel in Antarctica after this season.

9 thoughts on “Three cyclists gear up for Antarctica”