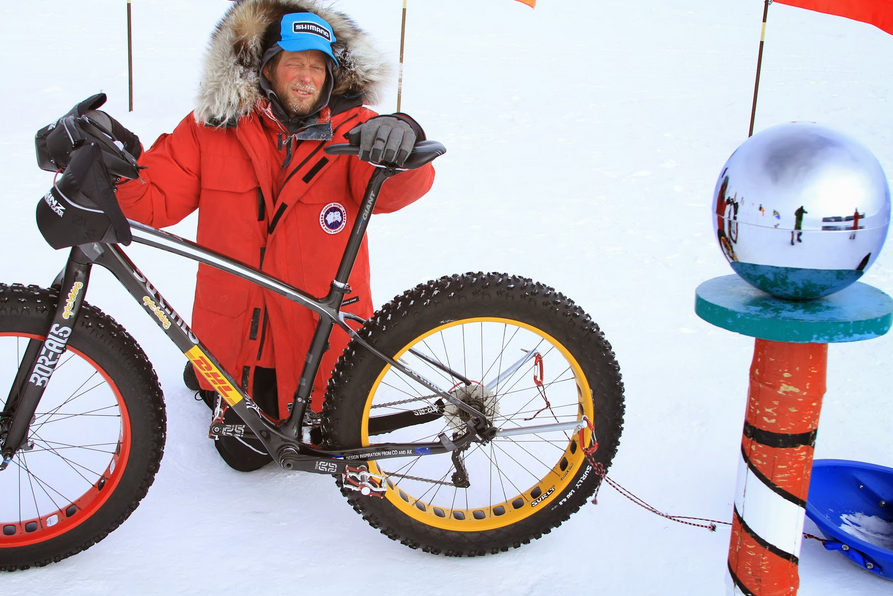 Daniel Burton at the South Pole. Photo from http://epicsouthpole.blogspot.com.

This year brought a new landmark in both fat biking and Antarctic exploration with not just one, but three successful cycling expeditions from the Antarctic coast to the South Pole. Each one was achieved in a different style that has brought inevitable squabbling about the details, but each one stands outright as an impressive achievement and a first in unique ways.

British endurance cyclist Maria Leijerstam was the first to arrive at the South Pole on Dec. 26, spending a speedy ten days riding her custom tricycle on the 400-mile Leverett route in a supported expedition. Spaniard Juan Menendez Granados, who used a combination of skis and a fat bike, arrived the South Pole on Jan. 17 in a solo, unassisted and unsupported expedition, traveling 700 miles in 46 days from Hercules Inlet. Granados was determined to pull all his food, fuel and gear from the start to the end, even after the trip took longer than expected and he began to run low on supplies. For the final days of the journey, Granados survived on a mix of leftover nuts, cocoa powder and sunflower oil, while traveling 15 hours each day and sleeping only four to five hours.

Daniel Burton, a bike shop owner from Utah, was the third to arrive at the South Pole on Jan. 21. Burton’s journey stands out because he comes across as a conventional family man and small-business owner who one day decided, “I’m going to ride a bike to the South Pole.” And, less than a year later, he actually did it — defying the expectations of critics who pointed out that he lacked polar experience, expedition experience, or even much in the way of winter cycling experience. With a Borealis Yampa attached to two sleds, Burton set out from the Hercules Inlet in early December and churned out 12- to 14-hour days of strenuous cycling for 51 days, minus four rest days (Burton, a member of the Church of Jesus Christ of Latter-day Saints, chose to log zero miles on Sundays as a religious observance.)

During his 700-mile journey across the frozen continent, Burton leveraged an impressive amount of grit and determination, proving that cliched mantra that “you can do anything you set your mind to.” Now, with that achievement behind him, he plans to go back to focusing on his family and business, as well as launching a foundation to donate mountain bikes to teenagers who demonstrate a strong interest in using them.

“Riding a bike to the end of the world changed my life, now I want to use my life to change the world,” Burton said. “I had a lot of time to think about things. I am determined to be a better father and husband, and I am working on my South Pole Epic Foundation to get more people biking.”

Since he returned to Utah, Burton has come out publicly with criticism about the number of miles Granados apparently skied while dragging his fat bike behind him in a sled. Based on tracks in the snow and reports from ALE, the Antarctic expedition provider, Burton estimated Granados only rode about 120 nautical miles of more than 650. Burton is quick to acknowledge that he also didn’t ride his bike the entire distance — soft snow, high winds, and whiteout conditions sometimes necessitated pushing his bike, which is a common practice in winter cycling. Traveling on skis with a bike in a sled has less precedence, and is bound to be controversial, especially when the transitions between cycling and skiing are more complicated than simply stepping off a bike and walking with it for a while. Leijerstam, on the other hand, claimed she “pedaled every meter” of her route on her tricycle, and never had to tow or push it at any point.

“My personal definition of biking to the South Pole was that I would ride whenever possible, and push when I had to, and never put the bike in the sled,” Burton said. “After I got going and I realized that there would be more pushing than I had realized, so I add to my personal requirements that I also had to ride every day. I am happy that I was able to complete the expedition by my definition of biking. There were plenty of times it would have been easier to just throw the bike into the sled and pull it, and I was really tempted to do it at times, but I stayed true to my commitment of not doing that.”

Burton said when he first started out, there was thick, soft snow on top of the surface crust. He would push most of the day and make ten miles or less. As time went on, sun hardened the fresh snow, and Burton would work to the limits of his abilities to pedal about one-tenth of a mile, stop to catch his breath, and try pedaling again.

“As the biking conditions improved, I went from biking 15 miles a day to getting around 18,” Burton said. “At this point when I would call in to ALE they would tell me that I was consistently getting more miles than any of the other expeditions. I could tell by how fresh Juan’s ski tracks were that I was gaining on him. He would try out the bike most days but never got many miles on the bike. I knew the bike was working better than skis at this point, and so when I would see Juan try out the bike, I would hope that he would give up on it before he figured out how much better it was working versus skiing.”

Toward the end, when Granados began to run out of food, his pace slowed considerably. At that point, Burton was logging more miles per day, and occasionally stopped within sight of Granados’ camp. When asked whether he ever attempted to pass Granados, Burton said, “Just before I was going to make my move, the weather got me. First, we had a couple of days of whiteout with soft snow. It was hard for me to follow the truck tracks Juan and I were following, and going outside of the truck tracks was more difficult, and so I was worth it to me to do everything I could to follow the tracks. With no contrast, I could not see the tracks and would get off of them a lot.

“Then the light snow started making the snow soft again. It got back to where I had to run pretty close to 0 psi in my tires. At this point I saw Juan riding his bike, get a few hundred feet and then switch to skis. I was able to keep riding because I had really low air pressure, and had gotten very good at biking in soft snow earlier in the expedition. But still the snow was soft and several days of low contrast meant that we were back to the conditions where skiing was more efficient than biking.”

At this point, Burton ran low on food himself. He had eaten all of his snack foods — Honey Stinger Waffles and Sport Beans — and was limited to three 500-calorie meals per day. He said he could only squeeze about 11 miles out of a meal before he had to quit pedaling because he felt so dizzy.

“One night I went through all my garbage and cut open the packages and ate the frozen remains of meals that were stuck in the corners, and that was my dinner. I figured I had just barely enough food to make it. If I could get 11.6 miles between meals I would eat my last meal 11.6 miles before the pole. I told ALE I was out of food, and they said they would send Hannah (an ALE employee stationed at the South Pole) down with more food for me. The dumb thing is I had plenty of food for the trip, I had just figured I would be done a couple of weeks earlier because I was moving so well in the middle of the expedition, so I sent a whole cache worth of food back at the half way point. Anyway, Hannah gave me what seemed like about fifty pounds of food when I was 19.1 miles from the pole. It had a lot of candy and chocolate and carrot cake in it. It was great and let me finish the expedition with a lot more energy.”

Burton’s trip was a “solo, assisted” trip, meaning he received several supply drops from ALE. The eleventh-hour food delivery from Hannah, as well as a delivery of a new wheel in a scheduled supply cache after Burton’s hub on his real wheel failed, were part of this assistance, and by Antarctic record-keeping definitions do not change the status of his trip.

I also asked Burton something I have been very curious about for years — whether, in his opinion, a bicycle is an efficient vehicle for Antarctic use. In many cases of winter travel on a compacted surface, bicycles provide advantages that no other form of human-powered travel can match. But I wondered if the combination of challenges in Antarctica — high winds, whiteouts, sasturgi, wind-drifted power, lack of compacted trail, remoteness, and extreme cold, would render a bicycle more of a liability than anything.

“One of the arguments Juan made is that it is that it is about what is most efficient, and it isn’t his fault that I chose to bike when skiing was more efficient,” Burton said. “But my expedition was not about what was the best way to get there. If you want the easiest way to get there, then fly. I think overall the skis are probably better than bike, however someone better than me could prove that wrong. I was very inefficient at the start in part because I needed to figure out how to get my clothing to work right. The first 40 miles skiing was by far better than biking, but from there until the last 40 miles I think biking was more efficient. So I think the right person may be able to bike faster than ski, but maybe not.”

Learn more about Burton’s expedition and new foundation at his Web site, or visit his GoFundMe Page to support future projects.