Eric Larsen rides his Surly Moonlander during a training ride in Canada. He is now set to begin his ride across Antarctica.

Antarctic cyclist Eric Larsen took advantage of a brief break in the coastal fog to fly into Hercules Inlet on Thursday, completing the last leg of a long journey just to begin his ride toward the South Pole. 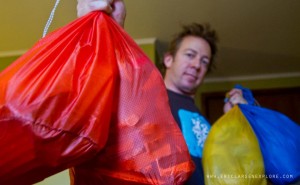 “The last week has been very intense with prep and getting the bike ready,” said Larsen’s technology advisor, Tim Harincar, who accompanied him to Punta Arenas, Chile. “The bike prep included repacking all the bearings and wheels with a light coat of teflon grease that has a -65F rating. Wheels and tires were separated for transport, and the rear derailleur removed. We just didn’t want the chance of it breaking (though a spare is along to the start, but is being left behind at base camp.) Once we arrived in Punta, out hotel room at the Condor became a bike shop. We fitted the racks, mated the (tires) to the rims, removed the rear brake, added three fixed camera mounts, a compass mount, and a host of smaller things.”

Harincar and Larsen test-loaded the bike with ten days worth of food to form a rough idea of the weight and bulk that Larsen will have to maneuver during his journey. They estimated the loaded Surly Moonlander came in just under a hundred pounds, although they were not able to weigh it. Larsen will begin his ride with about ten days worth of supplies, and plans to refill at a base that is roughly halfway to the pole.

While waiting out the weather delay at a camp on Union Glacier, Larsen said he wrestled with stress and doubt about the ride. The months of preparations, his family in Colorado, the expanse of white landscape in front of him, and the weight of what he was about to attempt settled in like an ice fog. In an effort to calm his swirling anxieties, he loaded up his bike and set out on the packed snow for a spin around the base.

“Moving was the only thing that seemed to ease my mind,” he said. “The stress of organizing, planning and preparing for this trip had reached a peak, and given the option, I may have pulled the plug then and there. It would be one thing simply skiing to the pole (something I have done several times) but biking nearly 750 miles involves so many more variables. ‘What am I doing here.’ I thought to myself over and over. Self doubt is my most enduring expedition partner.”

Larsen woke up the following day feeling a sense of peace about the unknowns, and set to making last-minute preparations in his gear. He practiced replacing his panniers, and tied lanyards to his ThermaRest, shovel and sleeping bag so they wouldn’t fall off the racks. “The wind here can be brutal on a good day, so keeping track of this equipment is critical to my survival here,” he said.

The wind is a big factor in the CycleSouth bike expedition. Antarctic winds typically blow from the polar plateau in the interior of the continent, toward the coastline. The altitude at the pole is about 10,000 feet above sea level; as cold air pools in the interior, it begins to slide downhill toward the coast, with few landmasses to get in its way. In other words, the wind almost always blows north — and, when pedaling south, is almost always a headwind.

“One idea i had for him in regard to getting this vehicle rolling was to always start off going down wind, then making a loop back around into the wind, rather than trying to start from zero with a headwind,” Harincar said. “An interesting part of this trip will be to see what sort of daily system Eric is able to work out to deal with these specific Antarctica challenges.”

If Larsen can reach the pole within his 22-day schedule, he plans to turn around and pedal back toward Hercules Inlet for a complete out-and-back journey. So if all goes well, he’ll be able to enjoy the rewards of a 750-mile climb into the fierce wind — downhill, with a tailwind.

More on the journey:

Gearing Up For a Ride to the South Pole