Eric Larsen’s Surly Moonlander is loaded with some of the gear he plans to take to the South Pole. The custom Granite Gear panniers have since been updated.

Eric Larsen’s satellite tracking  and other equipment, bound for Antarctica.

This Thursday, polar explorer Eric Larsen will depart Colorado and travel toward Antarctica to begin his bicycle expedition to the South Pole and back. He’s making his final preparations with lists that detail his bicycle, equipment, camping gear, clothing, tools, and food.

“Written out it seems like a ton of stuff, but realistically the amount of gear that I will use to live and survive over the next six weeks is minimal at best,” Larsen said. “Still, if I was skiing to the South Pole, all this would be a breeze; however, doing something that no one has ever done before poses more than a few logistical and gear-related questions.”

Larsen’s Surly Moonlander will be equipped with 4.8-inch “Bud and Lou” Surly tires with tubes. He will replace all grease with a synthetic lubricant. Other unique features of the bike include a single mechanical disc brake on the front (because he said he’ll rarely reach speeds faster than five or six miles per hour), and interchangeable front and rear wheels. He will use custom wide racks from A-Train Cycles, and custom pogies and a frame bag from Revelate Designs. He also said he will be using clipless pedals with a custom-designed pair of boots outfitted with cleats. 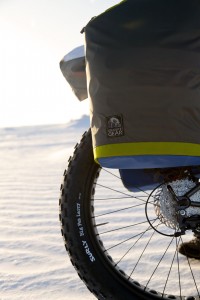 Larsen does not plan to drag a sled behind the bike, but instead carry all of his gear and clothing on the racks and inside custom-designed panniers from Granite Gear. Dan Cruikshank designed the panniers out of Cordura, a lightweight but durable fabric.

For camping, Larsen is packing a Hilleberg Atko single-person, single-pole tent. He’ll cook with an MSR stove, and use a Goal Zero solar panel to recharge batteries. Some of is clothing is being provided by Bergans, which Larsen has used on his past polar expeditions and said he’s satisfied with its performance. He also worked with Minnesota-based gear company Ergodyne to custom-develop some of his layers, which he’ll be testing in Antarctica. He’ll use Yaktrax on his boots to aid in traction on the ice, and Optic Nerve goggles with a nose beak. He plans to carry water in small, tubeless hydration bladders made by Vapur.

Food — because of the sheer amount the must be carried in a relatively small space — is one of the most difficult challenges in packing for a polar expedition. Larsen had to choose high-calorie density, compact foods that he can cook quickly or consume on the go. He pared his fuel and food down to “a bare minimum,” meaning he has to stick closely to his planned schedule to prevent his energy and water sources from running out. For breakfast and dinner, Larsen will cook Mountain House freeze-dried meals, which have been crushed into powder to fit more compactly in the bike’s panniers.

During the day, he’ll snack on five or six Clif Bars, chocolate, cheese, and salami, and nuts, as well as an energy drink mix. Larsen’s meticulously planned meals include Mountain House freeze-dried Neapolitan ice cream and Skratch Labs “energy candy.” “It’s not all going to be hardship and suffering in Antarctica. I’m pretty excited about my desert,” Larsen said. He estimates he’ll consume between 5,000 and 7,000 calories per day.

For tracking, Larsen will use a DeLorme InReach, a two-way satellite communication device, to send out his position location as well as occasional text updates. He will also be able to receive texts on the ice. 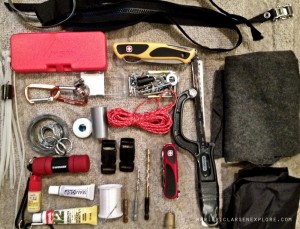 In his tool kit, Larsen is packing nuts, bolts, glue, duct tape, zip ties, dental floss, a Swiss Army Knife, whistles, and wire for the fixing of his gear, as well as bike-specific items such as spare tubes, spare chain links, cables and housing, wrenches, and a few other odds and ends.

He’ll have a scant few luxury items on board, but one of these are sport-specific disposable cleansing wipes called Action Wipes.

“My current no-shower record stands at 72 days (set in 2006),” he said. “Six out of the twelve months in 2010 were showerless as well (during the three legs of the Save the Poles expedition). Six weeks in Antarctica during Cycle South, while bath-free, will be quite clean thanks to Action Wipes.”

Larsen’s expedition is set to begin at the Hercules Inlet on Dec. 21. Live tracking will be broadcast at http://www.ericlarsenexplore.com/expedition/maps/current.