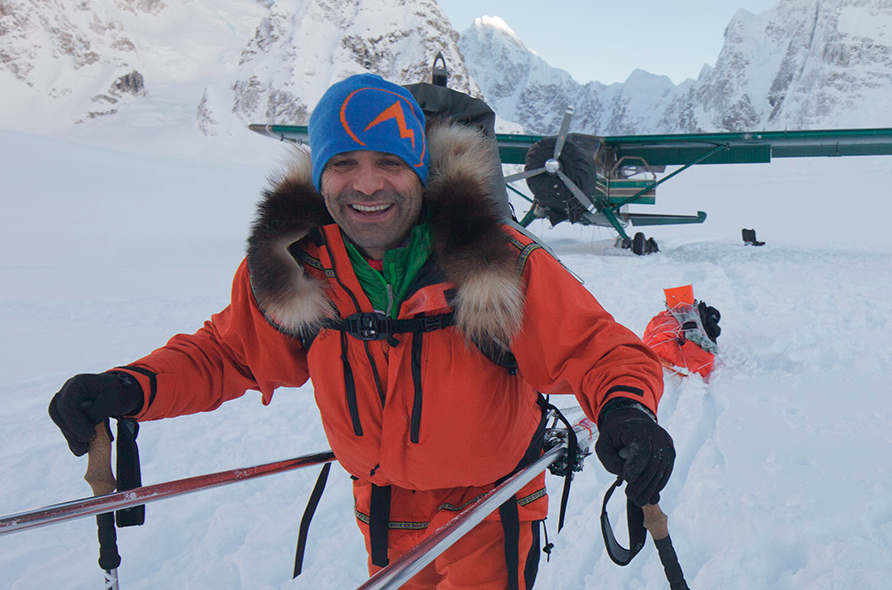 Lonnie Dupre sets out Tuesday afternoon, shortly after landing on Denali’s Kahiltna Glacier, where he buried a cache of supplies and established a base camp at 7,200 feet. Photo courtesy One World Endeavors.

After a week of waiting out weather delays in Talkeetna, Alaska, climber and polar guide Lonnie Dupre successfully reached the Kahiltna Glacier on Tuesday, the first step in a bid to become the first solo climber to reach the summit of North America’s highest mountain in January.

Of the thousands of climbers who have reached the 20,320-foot summit of Mount McKinley (also known as Denali to most climbers and locals), only sixteen have successfully climbed the mountain during the winter season. The high latitude and sheer mass of Denali contributes to extreme and volatile weather year round; winter temperatures can drop lower than 60 below zero, and winds can exceed a hundred miles per hour. January is typically the darkest and coldest time on the mountain, with less than six hours of daylight.

This will be Dupre’s third attempt at a solo ascent in January. In 2011, he was shut down by a storm when he was just hours from reaching the summit. Dupre huddled in his snow cave for seven days, but the window of stable weather he needed to continue to the summit never came. In 2012, he tried again. This time, weather trapped him lower on the mountain. Dupre said that each attempt served to teach him more about the equipment and weather he needed to reach the summit, and said he’s confident his experience will push him closer to success in 2013.

Dupre is traveling with a five-foot sled and a backpack, which together weigh 225 pounds. Attached to his sled are fourteen-foot aluminum poles that will allow him to span a crevasse should he slip into one. Up to 11,200 feet, he will also use long skis for bridging hidden crevasses, switching to exclusively crampons and a backpack for the steeper terrain above 14,000 feet. He plans to consume about 5,000 calories a day, saving on fuel by carrying food that can be eaten without cooking. He will also build snow caves as shelters, which he said are more reliable than a tent in a winter storm.

Dupre said the goal of his expedition is to create a platform to raise awareness about Alaska’s vanishing glaciers. Through his organization, One World Endeavors, he plans to produce a documentary called “Cold Love” about the fragile state of Earth’s frozen places. The organization is hosting a Kickstarter project to raise funds for the production.

Dupre will provide regular updates during his climb in his journal, http://www.oneworldendeavors.com/journal.