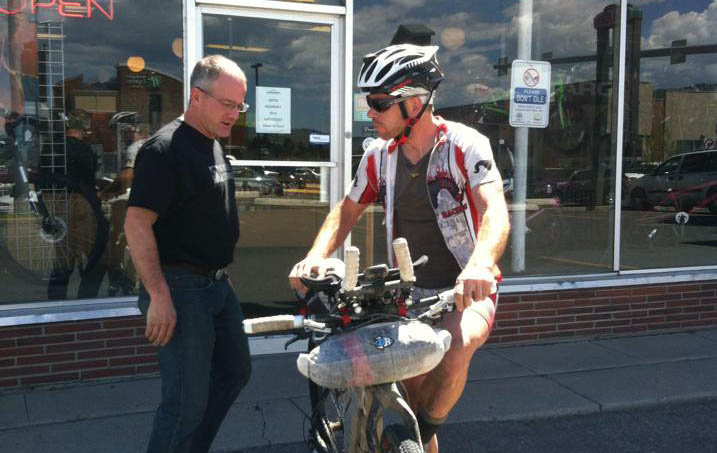 Craig Stappler leaves The Outdoorsman in Butte after getting some work done on his bike. Photo by Gunnar Fehlau / Overnighter.de

On a day when several Tour Divide riders are reporting body and bike issues are forcing them to cut back on their speed, race leader Craig Stappler is showing no signs of slowing an ambitious pace that has him riding nearly 250 miles a day and sleeping fewer than three hours each night.

Stappler left Butte, Montana, on Monday afternoon, with nearly 750 miles on the route and just over three days on the race clock. His nearest chaser, Mike Hall, is about 40 miles behind and falling farther back. Hall has reported breathing problems and other issues that have forced him to slow his pace. “Craig got away but I’m still on record pace or thereabouts,” he reported. “See if I can cough up some of this dust; it’s like breathing through a there-foot straw.” Hall said he suspects an allergy for his breathing issues.

Stappler reported he is feeling good and remains optimistic about his break-neck pace. “I haven’t allowed myself any frills,” he reported. “Mike Hall’s a beast; he’s making me ride my bike too fast. … I was starting to become afraid that he was stronger than me and I figured I better attack him. It looks like it’s working.” Both Hall and Stappler are still riding faster than Jay Petervary’s 2012 record pace.

In the women’s race, Sara Dallman has moved into the lead and is close to Eszter Horanyi’s record pace as she pedals through the Swan River region. Fellow Ohio resident Kristen Arnold is apparently holed up in Big Fork, Montana, although that may be a case of a SPOT tracking hiccup. So far she has not called in to report any issues.

Yo-yo rider Billy Rice left Banff late Monday morning after getting some work done on his bike. He reported that he rode all the way from Eureka, Montana, to Banff — 253 miles — in a single push without sleep and “I don’t recommend doing that.” He said he needed a good night’s sleep before starting the southbound segment of his ride. He is now pedaling south toward Elkford.

The three “triple crown” racers — Eric Foster, Max Morris, and Forrest Baker — are all pedaling in close proximity to each other ahead of 20-day pace. Morris reported he’s been having achilles tendon pain and plans to slow down a bit despite a friendly rivalry with Foster. Baker is leading the triple-crowners.

In the northbound race, Cjell Money is far off the front in Abiquiu, New Mexico. Wade Larsen and sole northbound female rider Lindsay Shepard have not recorded movement in nearly a day; their last recorded points are in a remote area of the Gila National Forest, north of Silver City.

The big question on blue-dot watchers’ minds right now is whether Stappler can maintain his unprecedented pace. The next section of the Great Divide Mountain Bike Route in southern Montana features more gentle terrain and fewer mountain passes  — a “downhill” run where riders can often bank a lot of time. The boondoggle in this section is the weather — thunderstorms move in without much warning and precipitation can render the clay-surfaced roads into unrideable muck for hours. Current forecasts are not calling for much of the way of wet weather for the next few days, so Stappler and others should have a smooth ride into Idaho.

Weather on the Divide has been uncharacteristically friendly with almost no snow on the higher passes, and no big storms so far. It’s telling that of the 130-plus starters, only four Grand Depart riders have scratched as of Monday afternoon. Track the 2013 Tour Divide at this link.