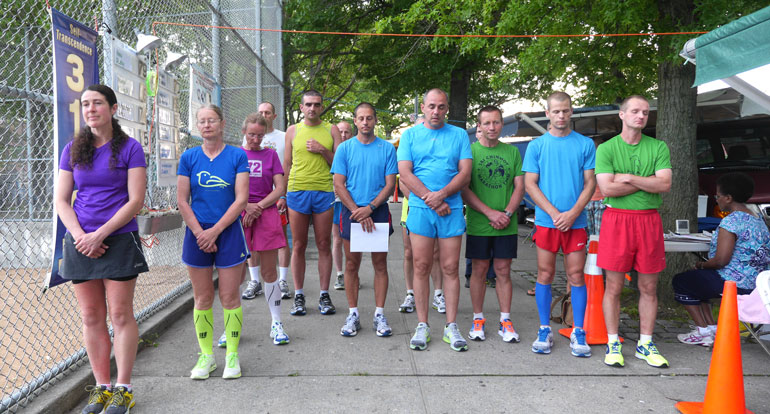 Participants in the Self-Transcendence 3,100-mile race share a quiet moment at the start of the race in Queens, New York.

It’s a footrace designed by a guru and touted as the longest in the world — but for the thousands of miles runners will travel in the Self-Transcendence race, the only ground they’ll cover encompasses a single city block in Queens, New York. There are no mountains to conquer, no continents to cross, and after thousands of laps amid the same urban scenery, nowhere to look but inside their own heads. That’s the whole point for these runners who commit to more than seven weeks of rounding the block, day after day after day — not only to test their capacity for physical endurance, but also self control and spiritual enlightenment.

On Sunday, June 16, twelve runners — nine men and three women — lined up for the seventeenth annual Self-Transcendence 3,100 Mile Race. The objective of the race is simple if staggering — 5,649 laps of a 0.5488-mile course (883 meters) in a timespan of 52 days. Sponsored by the Sri Chinmoy Marathon Team, Self-Transcendence is the longest certified footrace in the world; runners must average 59.62 miles per day to finish within the 52-day limit. 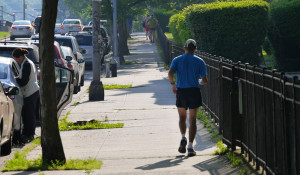 What runners have to look forward to for the next seven-plus weeks.

An Indian guru named Sri Chinmoy first inaugurated the 3,100-mile race in 1997. Chinmoy, who lived in New York City and died in 2007, believed that peace begins in the heart of each individual. He had a fondness for running and felt that the sport provided an excellent opportunity for people to challenge themselves and overcome their pre-conceived limitations — something he referred to as self-transcendence.

“I think as soon as you come to one of these races you feel how special it is,” said Sarah Barnett, a participant in this year’s race who covered 124 miles by the end of day two. “You notice how the runners are getting through the difficult periods and you just sense that it is very spiritually awakening for the runners, and you just want to be part of it.” Barnett said she started the race with a foot injury, which she wraps several times a day to help mitigate its effects. Although she’s grappled with the injury for weeks, she said its the first of her running career.

“This is a new thing for me to see if I can run through pain,” Barnett said. “I have had X-rays, and I have a heel spur and a tear in the fascia under the foot. Every step is quite painful. I am desperately trying to find some shoes that will cushion it enough. I am just trying to meditate as much as I can, and ask for some help.”

When asked why she would start the race with such an injury, Barnett said that she couldn’t picture herself on the sidelines of something she had planned for so long. “My only aim is to finish,” she said. “I can’t expect anything more. If I have to go to midnight each night and walk, this is my only goal.”

Daily updates from the race are available at this link.