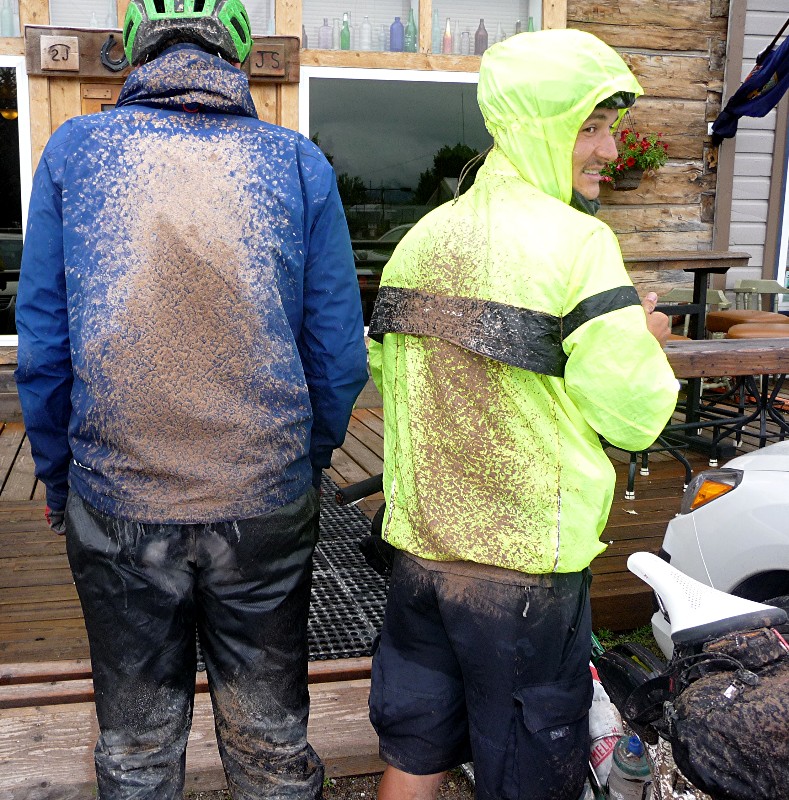 Thursday was a dynamic day on the Great Divide Mountain Bike Route, with a massive cold front and heavy rain in the north, drought and fire closures in the south, and intrepid Tour Dividers pushing forward despite sticky mud, chilling winds, nagging injuries, and accumulating fatigue.

At the front of the race, Mike Hall caught Craig Stappler early in the day. The two took a morning pit stop in Pinedale before setting out together into another 200-plus-mile day of riding. Mike Hall slowly increased his lead throughout the afternoon, and pulled away after they entered the Great Divide Basin beyond Atlantic City. It appeared Stappler may have stopped around 9:30 p.m. while Hall was still riding an hour later, about twenty miles farther into the Basin. Weather in the Great Divide Basin was favorable, with mild temperatures and northwest winds from 5 to 25 miles per hour — which will often be a tailwind.

Meanwhile, riders toward the back of the pack were being pummeled with a massive storm cell that moved into northern Montana overnight, bringing frigid temperatures, heavy rain, hail, lightning, and gusting winds. “The weather back here is just pretty bad,” said yo-yo rider Billy Rice, who is farther north than the main group. “Coming over Red Meadow Pass was the worst storm I’ve been in on the Divide. Looks like the weather is going to be bad for the next few days for those of us at the back of the Blue Dot Line.”

Weather conditions were particularly bad in Canada, with highway bridges washing out and towns being evacuated due to mudslide concerns. The town of Banff was under flood watch. Although no Tour Divide riders are currently in this region, the damage caused could have implications for northbound riders and future ITT starters.

Another weather-related obstacle is sticky mud, which can be particularly bad on the clay surfaces of roads in southern Montana. Forest Baker, one of the Triple Crown riders who is quickly moving up in the main field, reported slogging through the mud into Lima, Montana, on Thursday. “Still had all these storm systems move in so it was constant headwinds, and any time the road would dry up another system would move in and wet it down again,” he said. He claimed “no love for Bannock Road.”

Another potential roadblock for all southbound riders is an announcement that the Santa Fe National Forest will be closed to the public starting Monday, June 24. The national forest in New Mexico includes part of the GDMBR between Abiquiu and Cuba, and the closure could force riders to detour around the closed segment of public land. Any detours would preclude possible records this year, and are not welcomed by racers who wish to ride the “whole” route. It may be possible for mountain bikers to obtain a special use permit, and this option is currently being researched.

Speaking of records, Cjell Money is currently blazing a strong pace as one of three riders left in the northbound race. He decided to make a pitstop in Salida, Colorado, to have a crack in his frame repaired, but only lost a few hours in the interim. As of Thursday night he was nearing Steamboat Springs, Colorado. The “Golden Spoke” meeting of the lead southbound and northbound riders should happen sometime Friday.

Marco Nicoletti of Italy, who had been riding in the top ten, dropped from the race due to ankle injuries. Only thirteen of the original Grand Depart riders are listed as scratched, although the unofficial number is likely higher.

In the women’s race, Kristen Arnold is chipping away at Sara Dallman’s lead. Dallman remained about 90 miles ahead near Polaris, Montana, after both stopped for the night. At this point, Dallman is about 200 miles behind record pace.