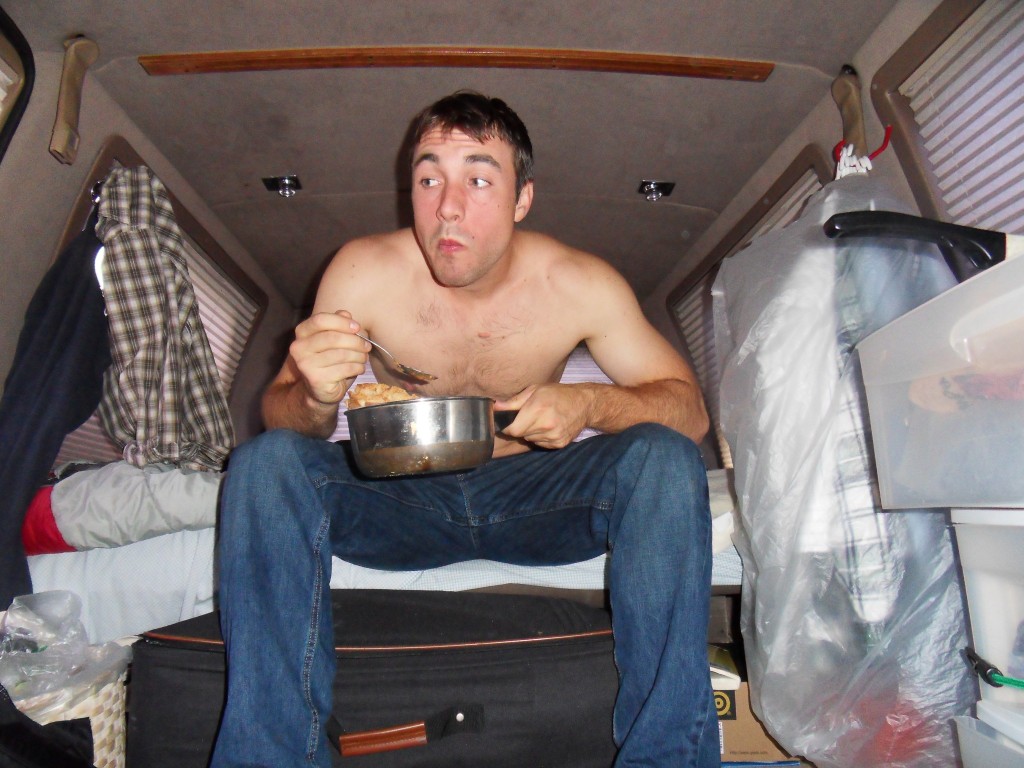 Ken Ilgunas in his van, where he lived for several semesters while attending graduate classes at Duke University.

Earlier this year, we followed hiker Ken Ilgunas during his mid-winter traverse of the imaginary line of the controversial Keystone XL Pipeline project, in a trek to raise awareness about the social and environmental implications of the proposed pipeline. A few months after completing his trek, Ilgunas released his first book, “Walden on Wheels: On the Open Road from Debt to Freedom.”

The book, completed before Ilgunas started his trek, takes on adventure of a different sort — a quest to escape tens of thousands of dollars in student lone debt that Ilgunas found himself buried in after just a few semesters at a private college in New York state. With little interest in the education he was seeking and even less enthusiasm for the debt-shackled future laid out before him, Ilgunas set out to shave away his debt with hard work and frugal living, all while becoming a more self-actualized and confident young adult.

“College had helped me see how everything, for my whole life, had either been predetermined or planned out,” Ilgunas writes. “I went to high school because I was forced to; I went to college because I was supposed to; and now I’d enter Career World because I was financially obligated to.”

With more than $30,000 in debt after less than two years of school, Ilgunas takes a summer job at a truck stop in Coldfoot, Alaska, in the shadow of the Brooks Range. Even though Ilgunas barely scrapes minimum wage, his remote location combined with provided room and board help him save nearly every dollar he made. At nine dollars an hour, he starts to carve away at his encompassing debt.

Meanwhile, Ilgunas’ peers sink deeper into debt, seek any job they can find even when it conflicts with their ideals, and become further obligated by mortgages and other large purchases. Ilgunas begins to view the American education system as a machine, one that has a tendency to snag youth who are uncertain who they are or what they want to do, entrap them in staggering debt, indoctrinate them into the dominant institutions, and then release them into the world with mounting obligations and no choice but to join those institutions.

“I met students everywhere who had similarly devoted half their twenties to something they had little passion for,” Ilgunas wrote. “Eventually, they’d be hyperspecialized and would only be qualified for work that didn’t at all fit their true interests or character.”

“Who am I? What’s worth fighting for? Who’s lying to us? What’s my purpose? What’s the point of it all? Perhaps many students would rather not be irritated with these questions, yet being compelled to grapple with them, it seems, can make us far less likely to be among those who’ll conform, remain complacent, or seek jobs with morally ambiguous employers.”

Instead of passively accepting debt as a part of life, Ilgunas continues to work low-paying seasonal jobs, live frugally, and save money until his debt is gone. The “Walden on Wheels” title comes from Ilgunas’ final protest against the machine, a decision to live in his van while he attended grad school at Duke University, in order to pay his way through school and not accumulate more debt. Student van living is the book’s hook and provides a number of amusing and sympathetic anecdotes, such as hiding from campus security and accidentally eating mouse feces before becoming violently ill.

But the most compelling aspect of “Walden on Wheels” is the way in which Ilgunas’s debt experiment takes him on a journey deeper into himself. He was a wayward high school student, a self-described slacker with little ambition and something of a defeatist attitude about the bland inevitabilities of adulthood. His early undergrad years only seemed to take him deeper into this hole, and he didn’t begin to open up until he started working in Alaska. Between workdays, he would often take solo journeys into the Brooks Range alone, learning how to become more self-reliant and trust in himself. In the midst of his low-paying jobs and hitchhiking ventures, the working-class people he befriended proved to be greater teachers than the classes he shelled out $30,000 for.

“I knew from my Brooks Range mountain climbs that to get to the top of a mountain, you have to be half-insane. The climber must approach his goal with a zealotry that may be inappropriate for normal, mundane things but is essential for the grandiose.”

“I wanted to learn how to live the best life possible. I wanted to be an “artist of life”: someone who knows how to live, how to die, how to be happy and valued and necessary and good.”

“Walden on Wheels” isn’t an instruction manual on how to extract oneself from student debt — although it does provide some good tips on frugal living. No, “Walden on Wheels” is a compelling memoir from a man who was dedicated and clever enough to acquire an education the hard way — from life — thereby earning his freedom to pursue the book education he desired — a “useless” degree in liberal arts from Duke University.

“And no matter how much sprawl and civilization overtake our wilds, we’ll always have the boundless wildlands in ourselves to explore.”